Simulation plays a key role to predict and prevent failure.

Simulation plays a key role to predict and prevent failure. 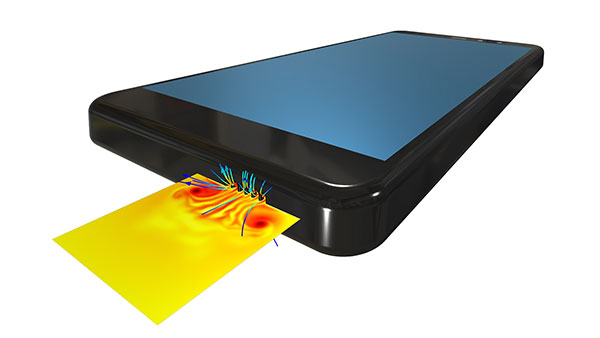 The simulated acoustic field in the vicinity of a mobile device micro-loudspeaker. For microacoustic speakers and microphones, as used in mobile and IoT devices, nonlinear acoustic effects are important to include in the analysis where also the effects of air temperature are critical for accurate predictions. Image courtesy of COMSOL.

There are many ways that Internet of Things (IoT) devices such as wearable heart rate monitors, home thermostats and smartphones might break or fail. To predict and prevent the possible failure modes, engineers must use a mix of technical know-how, historical data and imagination.

In the past, engineers recreated these scenarios of daily usages in testing facilities and labs. Today, the task takes place more frequently in finite element analysis (FEA), powered by mesh models and simulation solvers. But even these digital failure proofing methods have their challenges.

Completely eliminating physical testing is out of the question. Reality is complex and cannot be fully replicated in computer models and equations. However, the number of physical tests is now dramatically reduced, according to Bjorn Sjodin, VP of product management, COMSOL.

“This has to do with a couple of things. Computers are getting more powerful, so your desktops now have the power of supercomputers from the past. You no longer need to simplify complex multiphysics events, like fluid flow and structural physics,” he explains. “But you still need to conduct physical tests. You have a responsibility to prove you did everything possible to make your product safe to use.”

Technology company ABB is a COMSOL customer. A proponent of digital twins, the company uses COMSOL Multiphysics simulation software to study extreme scenarios such as high-temperature or high-pressure liquids passing through the device’s pipe. The simulation requires coupling electromagnet and flow solvers—previously a daunting task for the experts, but much easier to do today. 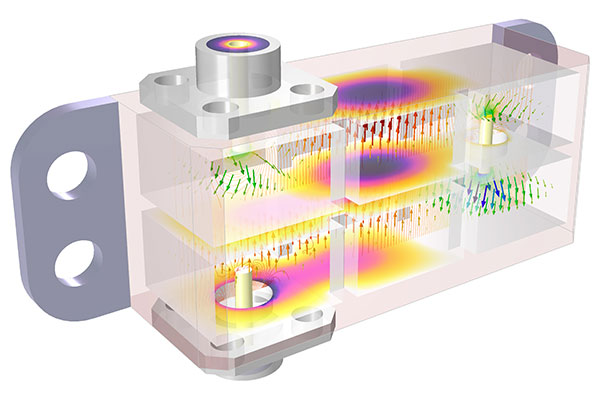 A multiphysics model of a cascaded cavity filter operating in the millimeter-wave 5G band, including temperature changes and thermal stress. 5G devices are smaller than previous generations of microwave components and pose novel challenges in thermal and thermal-stress management. Image courtesy of COMSOL.

“Fifteen years ago, coupled physics or multiphysics was for advanced users. But today, almost any simulation user can do it,” says Sjodin.

“While there has been an increase in the use of digital simulation in the electronics industry, there is still significant reliance on physical testing,” says Bryan Hurlbut, SIMULIA Global High Tech Industry process expert, Dassault Systèmes. “But the extremely short design cycles are pushing manufacturers toward digital simulation.”

“A virtual headset was built so we can predict possible failure before having a physical prototype,” says Alice Lin, manager, mechanics special engineering at Jabra. “The full headset contains around 90 parts, but all the contact between each part can be simulated. Compared with making real tests, it’s much cheaper and convenient by making simulations, because you can drop the headset at any angle and at any height, much earlier in the process.”

In 2014, COMSOL launched the Application Builder and COMSOL Server, which created a framework to publish expert-authored simulation apps for wider distribution. As an example, a user can make a failure simulation app to routinely conduct complex failure simulations with little or no supervision from the experts.

“In these apps, our customers encapsulate their deepest product and domain knowledge, so they may never see the light of day in the public realm. You might see some of these in academia. Some consultants might publish them for a closed audience,” says Sjodin. “But we do hear about them from our customers.”

Volkswagen was an early adopter of developing their own COMSOL apps. As part of its electronics vehicle development, the carmaker created an app for internal use, to evaluate the strength and durability of rotor laminations.

“The simulation experts concluded that they could automate the load testing to include interference, temperature and operating speed. These are parameters that colleagues in other departments would benefit from being able to change themselves.

General variable parameters include geometry, area, interference, contacts, number of active magnets and materials,” according to COMSOL’s case study (“Simulation Applications Streamline the Development of Electric Vehicle Motors,” December 2019). The resulting app could automatically calculate and generate a report to show the strength rating for laminated rotor sheet sections based on user input. 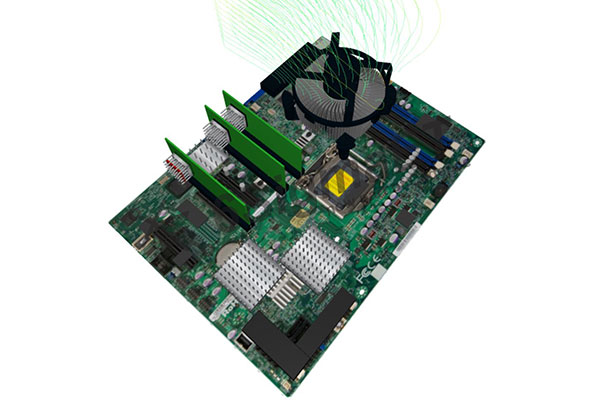 Simulating the cooling system on a chip in Cadence software. Image courtesy of Cadence.

Historical data is one reliable source that reveals how and when a product might fail, says Gary Lytle, product marketing director, multiphysics system analysis, Cadence Design Systems. Today, the cutting-edge approach is to apply machine-learning algorithms to improve failure prediction.

“We focus on hotspots that can cause catastrophic failures and thermal cycling for reliability,” Lytle says. 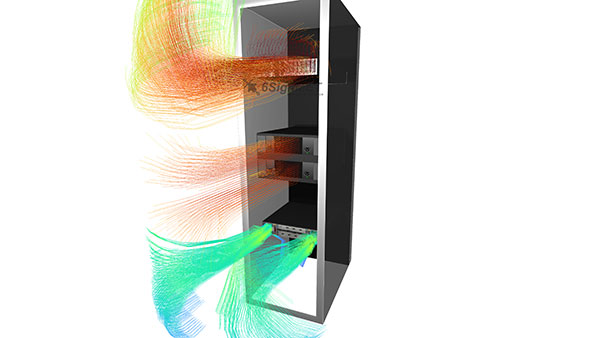 Simulation heat and airflow inside a rack in Cadence software. Image courtesy of Cadence.

“This means we can cover everything from the chip’s micro level to the hyperscale data centers’ macro level,” Lytle says, though simulating the heat loads on a printed circuit board (PCB) doesn’t necessarily give you insight into the impact of the cumulative heat load of the same PCBs operating in a data center.

“If you can make measurements—for example, the temperatures in the hotspots in a physical test—then you can calibrate the simulation results to match these values. Now you know you have a good model, and you can use it to predict the temperatures throughout the entire structure,” he explains.

“Think of impurities in the manufacturing materials or residual stresses,” he says. “These may be hard to obtain or model, but if you can include these in your simulation input, then you can better predict when the product will fail.”

Urankar uses a disposable device to monitor blood sugar, per his doctor’s recommendation. He tends to buy several units at once, stocking them up for three-month cycles.

“I’m sure the engineer who designed it had a specific temperature range in mind. But these have been sitting on my desk for a while now, and who knows how long they had been sitting in the pharmacy before I bought them?,” he says. “During the whole time, they are subjected to different temperature fluctuations, moisture and dust. Accounting for these cases of misuse or abuse is hard.”

For biomedical devices, such as stents and pacemakers, simulating the electromechanical behaviors of the device itself is well within the capabilities of today’s solver technology, but “it’s still a challenge to simulate precisely the actual physical environment where the device will live—meaning, the human body—and its effect on the device’s operations,” Urankar says.

Hexagon offers a range of metrology and scanning solutions such as VGSTUDIO MAX for computed tomography (CT) analysis and computer-aided engineering (CAE) solutions to model the behavior of materials and full systems models such as MSC Nastran, Adams, Marc, Digimat, Simufact, Cradle CFD and Romax.

Digital simulation has the advantage of a time machine. It can speed things up to let engineers see 10 years’ worth of wear and tear in a matter of hours or days.

“The fatigue from many thermal or mechanical cycles or the accumulation of damage from multiple drops can be calculated rather quickly compared to the time and cost of building and testing physical prototypes,” says Dassault’s Hurlbut.

He suspects modeling the product’s performance degradation over time will become more important as the right-to-repair movement gains momentum and, in some regions, becomes law.

Digital and physical tests are vulnerable to poor test design, or the failure to idealize accurately, says Hurlbut.

“If a component or interface is not accurately idealized in a simulation, then the prediction of the behavior can be inaccurate,” he says. 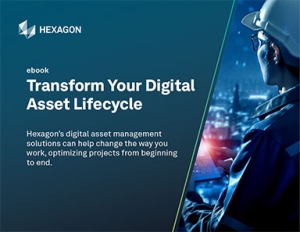 Transform Your Digital Asset Lifecycle
Hexagon's digital asset management solutions can help change the way you work, optimizing projects from beginning to end.
Datanomix and Hexagon Partner for Factory Analytics
Hexagon’s Manufacturing Intelligence division selects Datanomix for its No Operator Input approach to production monitoring and out-of-the-box data.
The Value of Digital Transformation Across the Asset Lifecycle
Improved productivity, is one of many significant operational benefits that digital transformation can have on an business.
Editor’s Pick: Multi-system simulation
Elements from Hexagon can examine multiple physics and logic elements in one simulation.
Editor’s Picks: December 2-December 8, 2022
One of the picks will be chosen as DE’s Editor’s Pick of the Week.
Hexagon Debuts System-Level Modeling Solution
Using the software, teams can evaluate the performance and feasibility of new design concepts quickly to inform more efficient product development, company notes.
Hexagon Company Profile