To make the engine a reality and support the performance levels required, the design for additive manufacturing 'anadiaplasi' piston was designed.

To make the engine a reality and support the performance levels required, the design for additive manufacturing 'anadiaplasi' piston was designed. 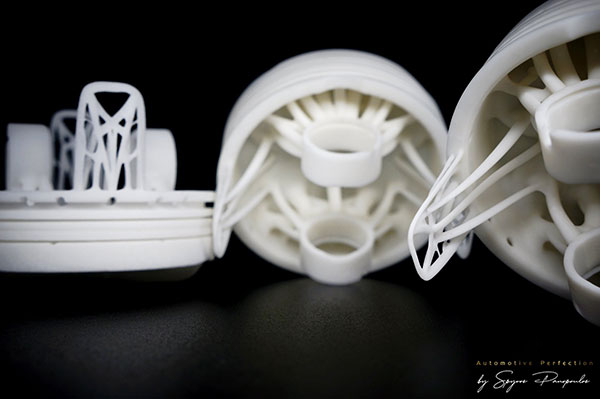 ‘Anadiaplasi’ is Spyros Panopoulos’ proprietary method of design for AM in which a component takes its shape based on the forces acting on it. Image courtesy of XJet.

How to Choose the Right 3D Printer
Choosing the right 3D printer is critical.

An additively manufactured car engine piston made entirely with ceramic has been developed by Spyros Panopoulos Automotive (SPA) for its Chaos Ultracar using XJet technology.

Spyros Panopoulos, SPA founder, and pioneer in the automotive industry, is pursuing speeds of over 500 kph and acceleration from 0 to 100 kph in 1.55 seconds for the Chaos, which is under development. The fast-revving production car engine reaches up to 12,200 RPM and 3,065 horsepower.

To make the engine a reality and support the performance levels required, the “anadiaplasi” piston was designed. ‘Anadiaplasi’ is Panopoulos’ proprietary method of design for AM in which a component takes its shape based on the forces acting on it.

Panopolous realized that to produce such complex geometry—along with the accuracy and surface finish required—additive manufacturing made sense, and in particular XJet Nanoparticle Jetting. Working in collaboration with Lino 3D, XJet’s business partners in Greece, SPA selected XJet Alumina material for the Chaos piston due to its strength, hardness, light weight and near total resistance to thermal expansion, according to XJet.

“Ceramic offers many advantages compared to other materials,” Panopolous comments. “Harder and stiffer than steel, more resistant to heat and corrosion than metals or polymers and weighing significantly less than most metals and alloys. XJet’s alumina parts will withstand the high temperatures expected to develop within the combustion chamber as well as on the fast-moving parts.”

Panopolous is putting additive manufacturing to use throughout the Chaos Ultracar with a reported 78% of the body being 3D printed as well as other lements such as the engine block, camshaft and intake valves.

“We are proud to be using such progressive technology in our Ultracar,” asserts Panopolous, “Our projects push performance to the extreme and so we are extremely selective about the materials and technologies we use,” says Panopolous. “I believe this is the first-time ceramic AM is being used in motorsport and I feel privileged to take that pioneering step.”

“SPA is taking ceramic additive manufacturing and design for AM – DfAM – to the edge and beyond with their work on the Chaos Ultracar,” Haim Levi, XJet VP Strategic Marketing, says. “Designers and engineers from a wide range of industries and applications are exposed to new options now opened for them. We expect the Chaos project ceramic piston to ignite their creativity and imaginations and push the limits in the automotive industry and beyond.”