What to Choose? Gaming Beast or Productivity Workhorse 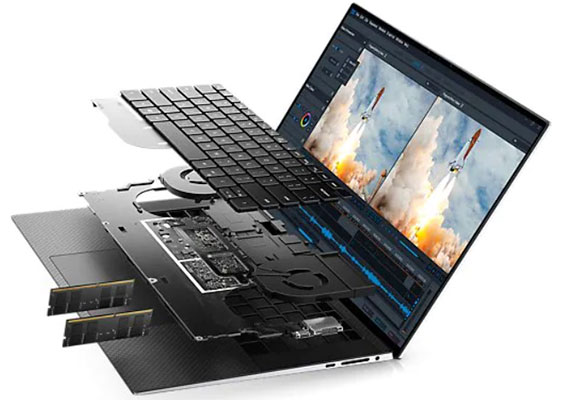 The Dell Precision 5550 is a highly customizable mobile workstation. Image courtesy of Dell.

By day, Travis North is a senior distinguished engineer at Dell with a focus on power and performance. He is a regular user of Siemens Simcenter Flotherm. When doing a thermal analysis, North says the software calculates “tens of millions” of cells to solve for mass momentum energy.

He uses a Dell Precision 5550 mobile workstation, and he says it “grinds on the model” to get results down to 0.01 mm. It takes several iterations, and “every iteration must run on every cell.” The software makes heavy demands of the CPU, graphics processing unit (GPU) and memory/storage subsystem.

But by night, North is an avid gamer. He uses an Alienware gaming mobile, which he describes as a “mustang.” Gaming computers are almost always running in overclock mode, which means the CPU and memory settings have been adjusted to run at speeds higher than their official rating.

“The risk is occasional blue-screening,” North says. “There is also a higher risk of calculation misses and software failures. Overclocking and overvoltage can mean buying a new system in two years instead of four.” Gamers take the chance in exchange for extreme performance.

Games are CPU intensive, and most serious gaming rigs have high-end CPU cooling units. The GPUs are important, but not as important as they are for engineering applications.

“It is often fifty-fifty on CPU and GPU use,” North says, in contemporary engineering applications; more so for simulation and analysis applications than for design. “These programs run multiple threads and are very active.”

Would North use a gaming computer for Flotherm? Not likely. “Gaming systems have more horsepower because of overclocking, but using them runs the risk of losing data or having a calculation failure.

“It’s too risky for [computational fluid dynamics] (CFD),” North continues. “The cost of failure is high.” A single user could run Flotherm from a gaming unit, but there are risks due to the complexity of CFD. The big issue is stability. “To say, ‘Hey, I’ll overclock a workstation’ runs a high risk of software errors, too high for 12-hour simulation runs.”

Users Not so Sure

To get a different perspective, we posted an open-ended question on LinkedIn about the use of gaming PCs vs. engineering workstations. None of the 14 respondents mentioned the use of CAE; most were running Autodesk Revit, McNeel and Associates Rhino 3D, and various rendering tools favored in the architectural community. Most said they owned gaming PCs.

“It’s great to be able to overclock it when I want to, and to run normal power and fan levels when not needed,” he says. “When fans are at full load, it sounds like it will levitate.”

Michael Freiert with Pope Architects says several members of his team use an MSI GS66 Stealth, a gaming mobile equipped with an NVIDIA GeForce RTX 30 series GPU and an 11th-Gen Intel Core i9.

“Mixed results” is how Freiert describes the experience. Several units needed the fan replaced. “I’d be willing to try them again on the right users, but not every user in an office needs a punchy machine,” Freiert says. “There are some great gaming devices, but you have to look under the hood.”

A few of the users thought the terms “gaming PC” and “engineering workstation” were just marketing speak, and not useful in helping the customer make a purchasing decision. Akash Asagaonkar, a software trainer and consultant with expertise in engineering and rendering, disagrees.

Users who dismiss the idea of workstations and gaming PCs as separate categories miss the point, says Randy Copeland, president of Velocity Micro, a boutique computer vendor that offers workstation and gaming models.

“We look at the intended use. Single-threaded vs. multi-threaded is the place to start. It all goes back to the application,” he says. 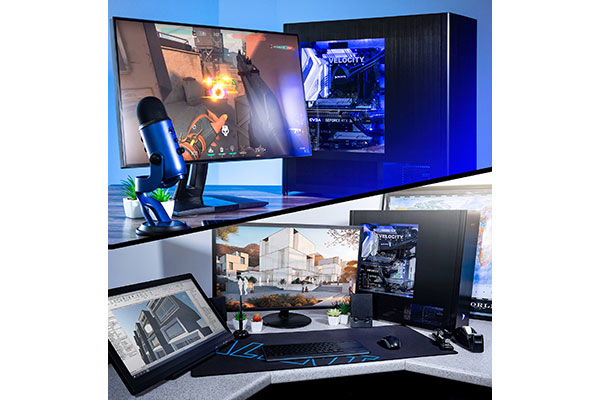 One large construction client came to Velocity because their current gaming PCs were giving unusual errors. “Two walls were supposed to be 200 feet apart. But the computer was causing design errors” and the distances were off, Copeland says.

“If you make parts that don’t fit because of the GPU, you won’t make that mistake twice,” Copeland says. “There is a considerable cost difference between an NVIDIA Quadro [for workstations] and an NVIDIA GeForce [for gaming and content creation]. If a mistake costs a fortune, don’t cut corners.”

Velocity Micro is noted in the industry as one of the first vendors to ship overclocked PCs. “We are the granddaddy of overclocking,” Copeland claims. “We have experience and specific intellectual property in it.” But he doesn’t recommend it for engineering applications. “Precision can be affected by overclocking, [there are] minute calculation issues.”

Copeland says many of the components are the same in both classes of computer, “but we have to consider reliability.” Velocity Micro has military and academic customers who will spend extra on a power supply that would be overkill for a gaming PC.

“The differences are small but they are important,” he says.

Several of our interview subjects mentioned the need for customers to do their own benchmarking before they choose a new system, especially if it is a large purchase. Most often mentioned were SYSmark 25, a commercial product; the various benchmark applications from SPEC (Standard Performance Evaluation Corporation), free to end users; and Cinebench.

SPEC is a nonprofit consortium that promotes use of workstation performance benchmarks for a variety of applications including engineering. It offers various testing applications to end users and manufacturers. Image courtesy of SPEC.

SYSmark comes with several industry-standard productivity applications on a 5-day license. Cinebench tests rendering and display capabilities with its own internal simulations. It is free, even though it uses the rendering engine found in Maxon Cinema 4D. PCMark, another popular benchmark application, tests with open-source software, so there are no licensing issues.