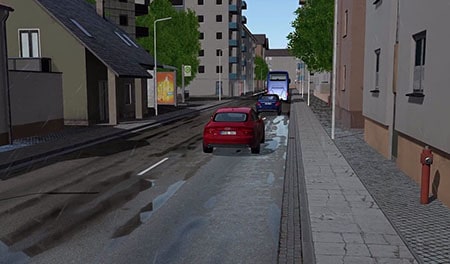 Simulated puddles of water with Physically Based Rendering in VTD 2.2. Image courtesy of VIRES. 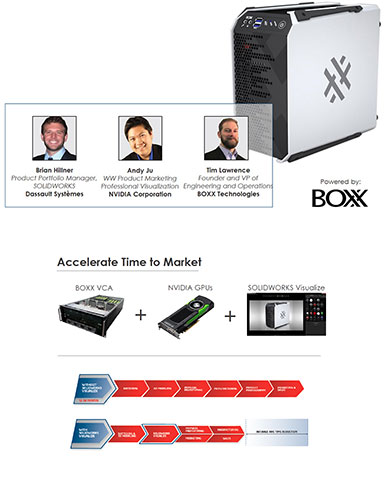 VIRES, part of Hexagon AB, and a member of the MSC Software family, has expanded its autonomous driving simulation capabilities with a number of enhancements to Virtual Test Drive (VTD), its open platform for the development and testing of advanced driver assistance and autonomous driving systems. Key highlights include a new Physically Based Rendering (PBR) technology for better photorealistic simulation visualization, new advanced visual sensor models, an expanded visual database to improve usability, and a new VTD API for easier connectivity with external vehicle dynamics and sensor models.

Physically based rendering renders graphics in a photorealistic way that more accurately models the effects of light in the real world. Incorporating PBR technology into VTD improves its graphics quality and makes the virtual models closer to reality. With advanced material texturing powered by Quixel Stuidio, users have access to a large library of materials created by scanned data.

With more granular definition of different materials and their surface reflectivity, this PBR technology has been extended in VTD 2.2 to increase the fidelity of the many LiDAR and RADAR models within the software. With PBR-based LiDAR models, users can now identify more details from LiDAR visualization like a glass window on a building, or a puddle of water on a road surface.

With this new release of VTD, more than 40 new vehicles have been added to the database, along with a new, more extensive demo database featuring a German town. Furthermore, a previous static dummy pedestrian model has now been replaced with an animated pedestrian. Expanding the VTD visual database within the base package improves the usability of VTD and reduces the need for customization from end users significantly.

A new VTD API in V2.2 makes it easier for engineers to connect VTD with their external vehicle dynamics or sensor models, the company reports. It provides a common interface and reduces the need for users to write their own codes to incorporate external components into the VTD environment. 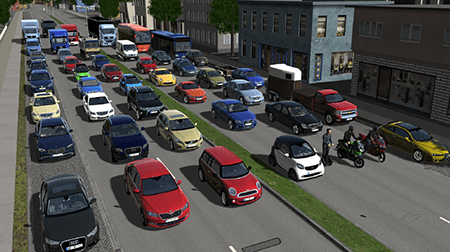 More than 40 new vehicles available in the VTD 2.2 Base Package. Image courtesy of VIRES.

This release also contains additional performance and visualization enhancements to major VTD components such as ImageGenerator, ModuleManager and TaskControl. For example, additional improvements have been made to post-processing. Through these new features and improvements, VIRES and MSC Software now offer a complete workflow for virtual development, testing and visualization of Advanced Driver Assisted Systems (ADAS) and Autonomous Driving (AD) systems.