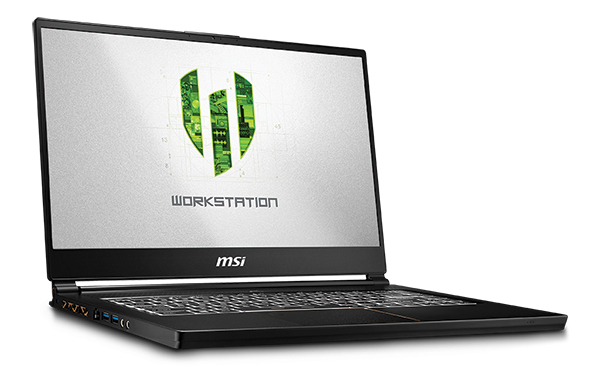 The MSI WS 65 8SK is a powerful 15.6-in. mobile workstation that features good design, light weight and great performance. Image courtesy of MSI.

It has been more than a year since we last reviewed a system from Micro-Star International (MSI). Unlike the large desktop replacement system the Taiwan-based company sent us last time around (DE, November 2017), the WS65 8SK system we recently received is a thin, lightweight system suited for an engineer or designer who wants to travel light. 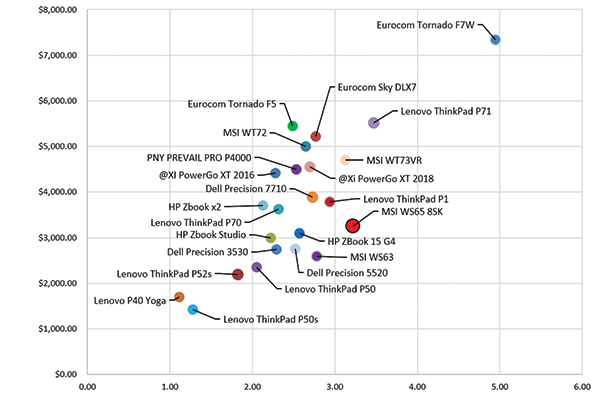 Unlike many other original equipment manufacturers, MSI does not offer custom configurations. The company sells two preconfigured systems based on specific component combinations. For example, the computer we received—the WS65476—is based on a 2.9GHz Intel Core i9-8950HK CPU and a CM246 chipset.

The processors in both models are six-core Coffee Lake CPUs and include Intel UHD 630 graphics. The Core i9-8950HK in our evaluation unit has a maximum turbo speed of 4.8GHz, a 12MB cache and a 45-watt Thermal Design Power rating. Both systems also include an NVIDIA Quadro P3200 graphics card. This discrete graphics processing unit (GPU) includes 6GB of dedicated GDDR5 graphics memory and 1792 CUDA cores and is virtual reality (VR) ready.

Lifting the lid reveals the 15.6-in. display and a backlit keyboard with 80 keys. An oval-shaped power button is centered above the keyboard, with an adjacent LED that glows white when the system is powered on and using the Intel graphics, or amber when the discrete NVIDIA GPU is in use.

A 720p webcam, centered above the display, is activated by pressing the F6 key. An LED to the right of the camera blinks when the webcam is active. There is also a small LED on the Caps Lock key. A 4x2.75-in. touchpad with multi-touch capabilities is centered below the spacebar. Although the keyboard lacks dedicated buttons, you can click in the lower-right corner to access right-click shortcut menus. A fingerprint reader is in the upper-left corner of the touchpad.

The right side of the case provides a USB 3.1 port, a Thunderbolt 3 port, a mini-DisplayPort, an HDMI port and the connection for the AC adapter. The left side of the case includes two additional UBS 3.1 ports, an RJ-45 network port, headphone and microphone jacks, and a Kensington Lock slot.

MSI includes a TrueColor app that lets you select various display profiles and its Dragon Center application that lets you monitor system components, tune performance and access the user manual and help desk.

Like most modern systems, the battery is not removable, and the manual does not address any user-serviceable components. During our tests, the MSI WS65 8SK remained cool and relatively quiet, although the fan noise reached 55dB during some of our tests. The four-cell 82Whr Li-ion battery kept the system running for 9 hours on our battery run-down test.

The MSI WS65 8SK performed quite well on all our benchmark tests. Thanks to its high-end Pascal-based mobile NVIDIA GPU, it turned in great results on the SPECviewperf test of graphics performance, earning very high scores for a 15.6-in. mobile workstation. 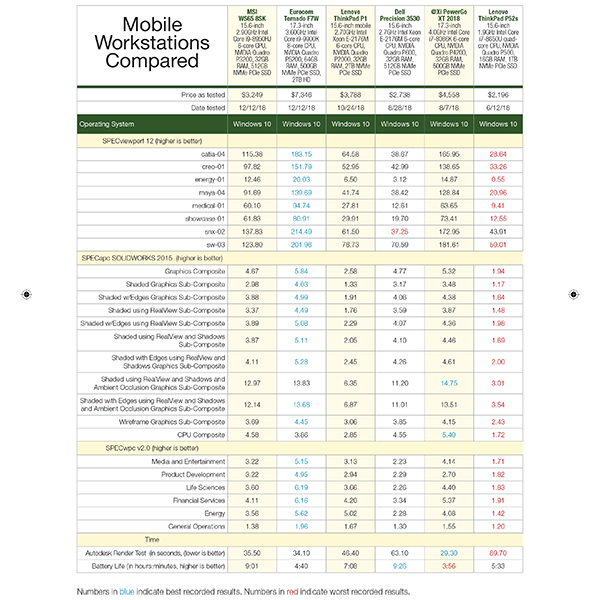 On the SPECapc SolidWorks benchmark, the MSI WS65 8SK also did very well, with results typical for a high-end mobile system. On the demanding SPECwpc benchmark, the MSI system also turned in results that led the pack of recent 15.6-in. systems. And on our own AutoCAD rendering test, the 35.5-second average rendering time was the fastest we’ve ever recorded for a thin, lightweight mobile workstation.

At the end of the day, the MSI WS65 8SK is priced well— though shop around to get the best pricing—and delivers great performance. Our conclusion: this is a great, thin, lightweight, VR-capable system that should suit any engineer or designer who needs a powerful mobile workstation but wants to travel light.