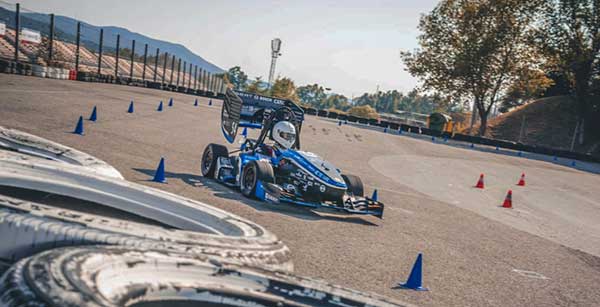 Vehicle formed by students from the Barcelona School of Industrial Engineering (ETSEIB) and the Barcelona School of Telecommunications Engineering (ETSETB). The ETSEIB Motorsport team focuses on designing and building two cars that they use to compete in the Formula Student tournament against other teams worldwide. Both of their vehicles are 100% electric, one driven by a pilot and the other one driverless. Image courtesy of ETSEIB.

AU 2020Virtual: AI-related acquisition, AEC digital twin, CFD-based generative design, and...
Company pushes for digitization and data as the key to resilience
Technology, Culture and Innovation
Vendors and customers will need to openly evaluate their needs and capabilities, and craft technology...
A Match Made in Heaven
Additive manufacturing and generative design tools can be tapped as a dynamic duo to create...
Lighter by Design
Generative design can help engineers meet new lightweighting requirements.
More Generative Design

Re-evaluating Computer-aided Optimization
What do we lose or gain in the era of generative design?

The Harley-Davidson LiveWire electric motorcycle was designed to improve its energy capacity by 90% while boosting this capacity relative to vehicle mass (kWh/kg) by an increase of 60%. At the same time, its chassis stiffness increased 143% and 97% in two primary directions of interest. Its rolling chassis mass reduced 2.3 kg.

It’s lighter by design. And when it revs its engine, it delivers sufficient rolling power, consuming a minimum of energy and delivering a relatively green footprint to the world.

Today’s design is demanding, calling for lightweight designs to boost characteristics that aid efficiency and speed, and enable things like electric power. Generative design is being employed in full force to meet design goals such as lighter materials. Lighter materials provide more capability in design performance and capability. The complexity of machines and parts is getting lighter by design. 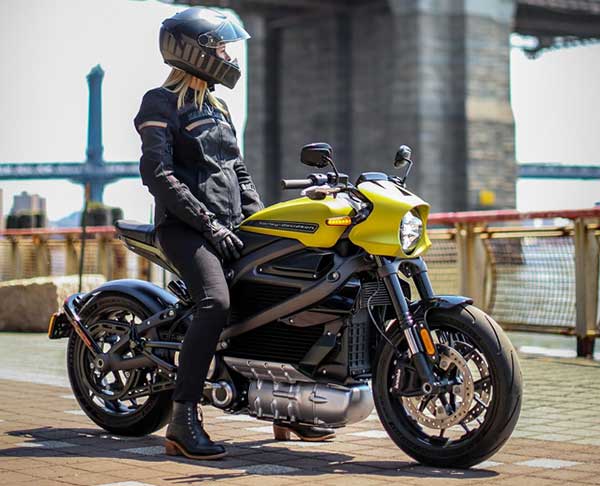 To meet targets for range, acceleration and handling, the Harley-Davidson LiveWire electric motorcycle energy capacity was improved 90% while the ratio of energy capacity to vehicle mass (kWh/kg) was increased by 60%. Chassis stiffness was increased 143% and 97% in the two primary directions of interest, with rolling chassis mass reduced 2.3 kg. Image courtesy of Harley Davidson.

“Design engineers in the auto and aviation industries favor lightweighting as a way to increase fuel economy (the less something weighs the less energy it takes to operate), while increasing product performance,” says James Dagg, chief technology officer of Altair.

Dagg says they use a proprietary optimization solution, Altair OptiStruct. It provides the best possible starting point for designing a structure and generating a conceptual design that withstands all real-world conditions and loads to ensure a safe and structurally efficient result.

“Similar to the way human bones naturally take shape, some thick and strong where needed and light and flexible in other places, our software can be applied to countless materials and structures at semiconductor speed until an engineer arrives at a design that meets the need without any excess material,” he explains.

“All internal lubrication and fuel circuits are integrated into our unique single-piece core engine,” explains Roger Stone, CEO of Sierra Turbines. “This way, potential points of failure and sources of leakage are avoided, thus increasing safety and engine efficiency while enabling a high-performing, lightweight design.”

Increased efficiency is one of the primary benefits of lightweighting, explains Dagg. He notes that this is especially true in the automotive industry where automakers need a multi-pronged approach to achieve many criteria: fuel efficiency, lighter structures and aerodynamic performance.

This will be even more important as electric propulsion becomes more mainstream in transportation design. “As OEMs begin to create battery-electric vehicles (BEV) for their mainstream customers to address issues like range, drivetrain efficiency and charging times, design becomes an even more vital component of the development process,” adds Dagg. “This requires fast exploration of higher system voltages, innovative cooling implementations and the ongoing race to reduce vehicle weight.”

Dagg says lightweighting not only decreases fuel consumption, but also lowers the carbon footprints of these vehicles. He cites a 3% to 5% decrease in carbon emissions per 220 lbs. of weight dropped. The benefits of lightweighting are not only economical, he says, “but also environmental.”

In generative design, innovative technology tools such as advanced engineering software can be a boon to producing lightweight mobility designs. This is especially true as autonomous and electric vehicles emerge.

Such designs require lighter weights to achieve their performance specifications.  These designs demand different permutations of materials and shapes,  properly sized, fitted, and appropriated to structures and components.  The goal is to intelligently design them with new and lighter materials such as lighter and composite materials, which reduce weight but do not sacrifice performance and strength.

MSC Software, for example, in conjunction with Hexagon Manufacturing Intelligence, has been quite successful in achieving such designs without compromising performance. By utilizing the power of its software to design parts and structural elements, vehicles are able to add new materials such as high strength steel, carbon fiber, magnesium, and more plastics within parts. The software optimizes the use of materials so less steel and more substitute materials may be used.

The net effect of using such engineering software tools is that crucial performance factors such as noise and vibration, drive handling, crash protection, durability and fatigue, and vehicle dynamics are met while achieving the MPG goals of the vehicle. 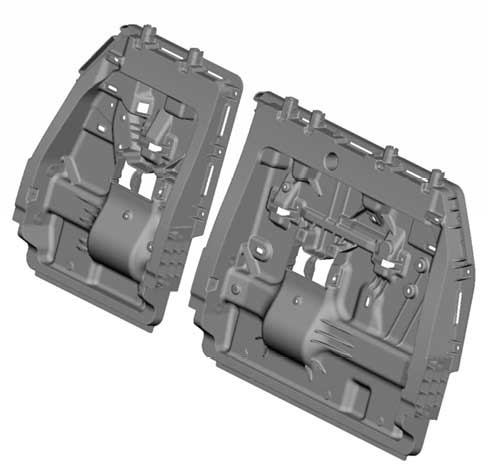 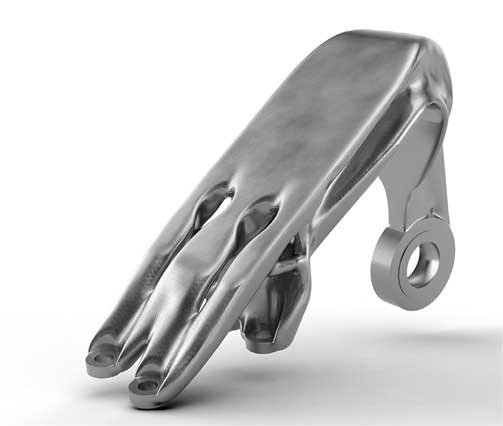 Lightweight design has become paramount in finding ways to shave off weight and equivocate the lighter weight into direct benefits. Lighter weight comes from less material. This translates not only into performance, but also material cost, as well as fuel savings. This is not only true for the automotive industry, but also for the aerospace industry.

“For aerospace applications, every ounce of reduced weight converts directly to dollar savings, and performance increases,” says Stone. “Looking lower down the value chain, if less material is used and fewer steps are required during manufacturing and assembly, this equates to a more sustainable and profitable business model for Sierra Turbines.

“Our patent-pending 360° fuel-injection system, where atomized fuel is delivered uniformly along the entire circumference of the combustion chamber, enables unprecedented burn-efficiency across a broad spectrum of operating conditions,” Stone adds. “Here, more power is extracted per unit of fuel with a single lightweight part, replacing what has traditionally been made of a heavier assembly of 61 separate parts.”

Airbus, for example, uses generative design to develop a 3D-printed partition for its air frame cabins, according to an article in Fast Company.

The article cited it as “45% lighter yet 8% stronger than anything it’s used to date. But the company is pushing further. It’s now applying generative design tools to reengineer many more parts of its planes, from the vertical stabilizer (that tall fin that’s on the back of a jet, now 20% lighter than ever before), to the legs of its seats, to the interior layout of the cabin, to how its factories are built for optimal production and cost-effectiveness.”

Fusing AM and Generative Design

Additive manufacturing and 3D printing unveil new and lucrative channels for lightweighting. Combine this with topological optimization and there are numerous paths to lighter designs and overall product improvement.

“More and more manufacturers are using topological optimization to reduce the volume of their parts by making them much lighter while maintaining or even improving their performance,” says Toni Aranzana, an engineering manager with BCN3D, a 3D printer and manufacturer in Spain. BCN3D produces desktop and workbench 3D printers that use fused filament fabrication (FFF) technology.

“These types of designs present organic shapes that are not only optimal for operation but visually much more attractive and innovative. Additive manufacturing brings a lot of value to this type of design as these geometries are often impossible to achieve with other manufacturing methods. The appearance of new materials composed of carbon or glass fibers in technologies such as FFF, thermoplastic materials for end use parts with very low densities that in more than one case can be substituted for metal parts (thus reducing weight and manufacturing costs), must also be taken into account.”

Lightweight design is welcome in many different industries and applications, not just automotive and aerospace, but also in industries like construction and defense.

Recently, the U.S. Army, U.S. Marines and UK defense forces aligned to collaborate on design for lighter ammunition. The need arose from a growing concern about soldiers carrying much too heavy loads while moving into operational battle.

The debate over how much weight we expect our soldiers and warfighters to carry has been brewing for some time. It has sparked the design spirit of many material developers to prioritize lightening the load of the ammunition they carry. The development community across the services took a hard look at each piece of equipment carried by warfighters to reduce ounces or pounds.

The U.S. Army and the U.S. Marine Corps formed a Joint Lightweight Ammunition Integrated Product Team to synchronize these efforts with the goal of decreasing the weight of ammunition by at least 10%. This approach will ensure collaboration during development that will yield a better, faster, cheaper solution for the future warfighter.

The Joint Lightweight Ammunition Integrated Product Team studies the practice and investments across programs of different warfighting services to achieve lightweight ammunition goals. The mission of the team is to collaborate on combat requirements, material developer solutions and joint qualification of lightweight ammunition using alternative case materials that would meet or exceed the performance of current brass-cased ammunition in standard service weapons.

Lightweighting ammunition is another example that adds to the efforts of designers in the automotive, aerospace and other industries to boost performance and achieve more overall agility.

Luis Rodriquez is an application engineer with Ultimaker. He also notes the impact that topology optimization and generative design are having on fabricating lighter products with more uses.

“This analysis-based design approach finds the most optimized regions to place material based on the loads applied to a given approach,” says Rodriquez. “A computer program is used to do this. It has gained popularity particularly in the last 5 years, thanks to advancements in manufacturing methods capable of producing these shapes.”

“Do not be afraid to embrace new design tools and discard established norms when designing for additive,” advises Stone. “For example, why design with STL files when the native CAD file is infinitely better to use? Tools like nTopology allow you to manage layers (slices) extremely efficiently and have allowed us to generate complex geometry files with much smaller file sizes. This streamlines collaboration with our partners, allowing Sierra Turbines to remain agile.”