The 2021 Olympic Games may be over. However, beneath the gallantry of the games is a patchwork of big and small engineering feats.

The 2021 Olympic Games may be over. However, beneath the gallantry of the games is a patchwork of big and small engineering feats. 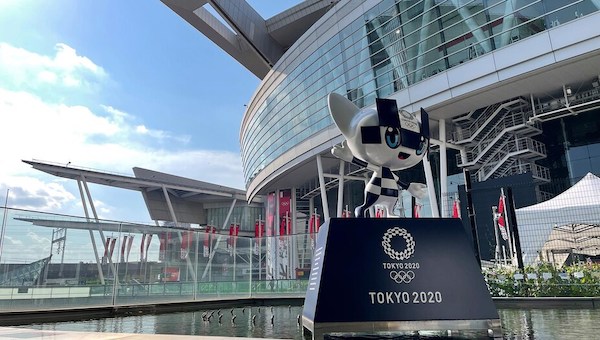 “Citius, Altius, Fortius” is the Latin motto of the Olympic games. It translates to “faster, higher, stronger,” a most fitting motto for all Olympic games and the bonanza of athleticism the games represent.

Faster. Higher. Stronger.
The 2021 Olympic Games may be over. However, beneath the gallantry of the games is a...
Engineering the Olympics
There was plenty of engineering know-how on display in Tokyo as well.
DE Editors’ Chat: Rapid + TCT Conference, Ansys Indy Autonomous Challenge, 3D-Printed...
DE Editors discuss Conference Travel, Virtual Race, Simulation in Olympics, and More
Phelps Sports 3D Printed Shoes at Olympics
Under Armour has created 3D printed shoes for Olympic swimmer Michael Phelps.
More Olympics

“Citius, Altius, Fortius,” is the Latin motto of the Olympic games. It translates to “faster, higher, stronger,” a most fitting motto for all Olympic games and the bonanza of athleticism the games represent.

But it’s also a most fitting representation for those in Tokyo 2021 Summer Olympic Games, replete with engineering feats of all types. Some are subtle; some, not so much. It’s worth noting that beneath the multitude of sporting events is the collaborative work of engineers throughout the world who made many things faster, higher and stronger in a different way.

Not Just An Olympic Swimming Pool

At Georgia Institute of Technology (Georgia Tech), its athletic swimming pool was used at the 1996 Summer Olympics in Atlanta. But at a time when Olympic swimming was a major event at the in Tokyo, it’s important to note that swimming pools are not all created equal. In fact, the pools created for the Olympics have some hydrodynamics involved in their design and engineering that greatly influence the way swimmers perform.

Nobody knows this better than Georgia Tech where their pool is one that was designed to help swimmers swim faster. The speed of swimming, design experts say, is influenced by structural design of the pool.

At the Georgia Tech McAuley Aquatic facility, their pool is one of the fastest in the world and was used to host the NCAA Division I Men’s and Women’s National Championship recently. Pools are designed with many conditions in mind: airflow, depth and other structural factors in place to enable athletes to swim fast. 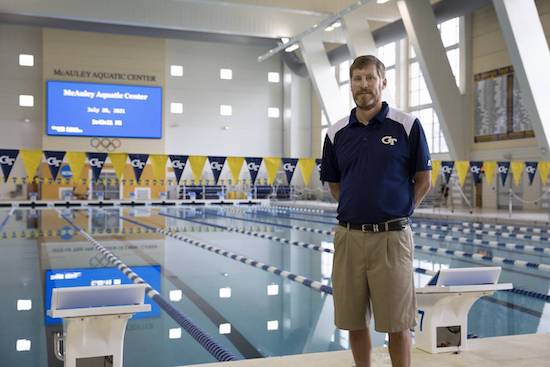 At Georgia Tech's McAuley Aquatic facility, their pool is one of the fastest in the world and was in fact used to host the NCAA Division I Men’s and Women’s National Championship and the 1996 Olympics in Atlanta.

Jud Ready is an adjunct professor in the School of Material Science and Engineering at Georgia Tech. He notes that the Georgia Tech pool is among the fastest despite other pools being built across the United States with the same objective. Ready incorporates pool design into his class about materials and engineering. The differentiating factors can be found at the bottom of the pool as well as in its size.

When swimmers first dive into the pool they can strike the surface with their hands and feet. According to Ready, the compression waves created when they immerse will rebound. If it’s too shallow, the wave energy can bounce off the bottom and may negatively affect their speed.

Though it may seem minor, even the pool structure counts, as swimming times are within 1/1,000th of a second. The other factor about their pools’ design is the return jets. They’re built in the bottom of the lanes rather than on the sides. Most pools that we see have jets installed on the sidewalls. In the case of Georgia Tech’s pool, recirculating about a million gallons of water from jets every four hours would create a current that could adversely influence swimmers in different ways.

Bike Design On the Olympic Course

Pools may affect swimming performance, but materials and design greatly affect cyclist performance. Each fall, at the John Hopkins Whiting School of Engineering, Orla Wilson, an engineer at the school, challenges her students to consider all the components of material combined with structures and the processing of all material to create a bicycle design with the best performance.

Olympic cycling and the equipment used are carefully engineered to help athletes achieve record-breaking performances. In Wilson’s case at Johns Hopkins, very lightweight bicycle frames used in road races at the Olympics are significantly different from those used a decade ago. Frames are made of carbon fiber with layered resin, which also contains fibers of different materials. They’re designed and engineered to be strong, light and aerodynamic.

For the Tokyo Olympics, 3D printing was used to design and fabricate a new track bike by the Great Britain cycling team. Two engineering companies partnered to employ 3D printing and build rapid prototype parts for the HB.T bicycle These parts allowed the team to enter a wind tunnel testing to further develop an aerodynamic bicycle.

A final version of the bike was made of carbon fiber. Additive manufacturing and more tooling were used for certain constituent parts—which included a unique aerodynamic front fork and a handlebar design—to help helped further accelerate the bike’s performance for the cycling team. 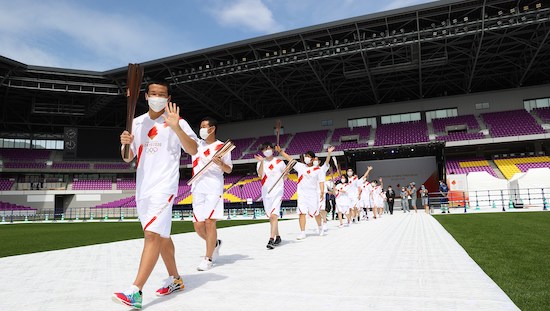 Olympic torches used repurposed materials. Torches designed by Tokujin Yoshioka were made from recycled construction waste from temporary housing used in the wreckage of the Japan earthquake and tsunami of 2011.

Off the road and onto the range, archery—once viewed as an age-old traditional sport—has also gone high tech. Archery may bring to mind Robin Hood, or movies and folk tales that featured an archer with an archaic wooden bow and a bowstring. The Olympics demonstrate that archery is a competitive sport taken seriously. It incorporates an arsenal of technology in the design of the bow and arrows that the athletes use.

High-end bows now have very little wood and are usually made from aluminum and carbon fiber. Like bicycles, archery bows use strong, light materials that enable the archer to still exert great pressure on them when pulling back on the string.

Another component using high design is the bow’s scope and its grip, both designed precisely with lightweight materials. Olympic archer bows have rods obtruding it that serve as stabilizers. The weight adds inertia and allows archers to hold their bows steady when aiming and absorb vibration once the archer shoots.

The British cycling team’s 3D printed bike parts certainly was not the only use of 3D printing at the Olympics. The 3D printing revolution has reached the Olympics, enabling many innovations.

Procter & Gamble worked with The Tokyo Organising Committee and The International Olympics Committee to 3D print 98 podiums for the games’ award ceremonies. The podiums were built out of plastic recycled from over 2,000 Japanese locations. Podiums featured an Olympic logo fabricated from repurposed aluminum. They were used in the Olympic and Paralympic games.

In addition to podiums, grips used by athletes in the pistol shooting competition were 3D-printed. Céline Goberville worked with a 3D printing company—to create a very ergonomic pistol grip. An ergonomic grip was designed to help a French athlete achieve a very accurate shot in the 10-meter air pistol shooting event.

In addition to incorporating innovation and technology, the Tokyo Olympics made a concerted effort to take sustainable measures in almost all facets of the Olympic games. Olympic organizers strived to create an Olympic game that represented a “minimal impact games.”

They did this through the guidance outlined in the Tokyo 2020 Olympics and Paralympics Games Sustainability Plan. The plan had multiple target areas to repurpose material that would otherwise be used as waste and incorporated into the daily life of the athletes. Many venues within the Olympic events already used repurposed materials (which dates to the 1964 Tokyo Olympics); however, the 2020-21 Olympics provided an opportunity to show advanced technology and methodologies.

For example, Olympic torches used repurposed materials. Torches designed by Tokujin Yoshioka were made from recycled construction waste from temporary housing used in the wreckage of the Japan earthquake and tsunami of 2011. The designer used an extrusion technique to produce a rose-gold torch, which measured 71 cm in length. They resembled the national flower of Japan, the Sakura flower, iconic to Japan. Relay torches and cauldrons holding the Olympic flame were fueled by hydrogen in lieu of fossil gas to send a signal that uses a cleaner burning fuel used in sustainable power generation.

Another Japanese designer Junichi Kawanishi extracted precious metals used in old mobile phones and other e-waste that the public donated. The designer uses these materials to create reflective ribbon-like rings around the edge of the Tokyo 2020 Olympic and Paralympic medals. The designer’s winning medal design was selected from a competition that drew entries from over 400 entries. 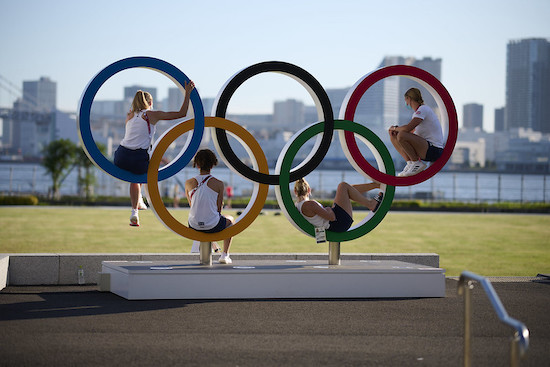 By looking within the Olympics—which are on the world’s stage—we can see, if it’s pointed out to us and we look hard, a smorgasbord of technology that is showcased alongside the stunning athletic performances demonstrated by the world’s best athletes every four years on the Olympics stage.

A Smorgasbord of Technology

Engineering design and associated technology often takes center stage in products and other systems we use in our daily lives. But technology never gets enough attention as it’s often behind the curtain of many great things that improve our lives every day.

By looking within the Olympics—which are on the world’s stage—we can see, if it’s pointed out to us and we look hard, a smorgasbord of technology that is showcased alongside the stunning athletic performances demonstrated by the world’s best athletes every four years on the Olympics stage. Their performance, like the technology that pervades everywhere they performed, truly elevated the games to one that was faster, higher and stronger.