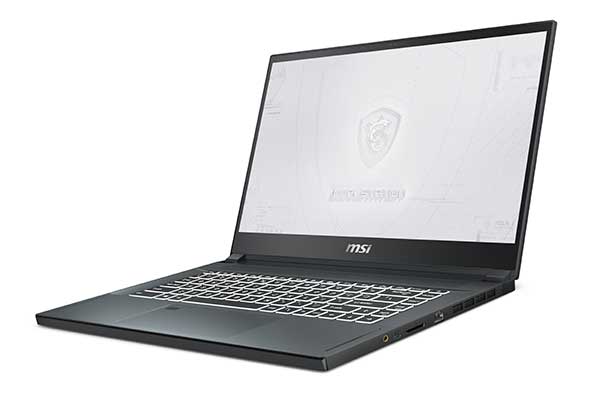 MSI recently launched its next generation of mobile workstations and it delivered one to us for a hands-on evaluation. It has been more than a year since we last reviewed a mobile workstation from the Taiwan-based company (DE, October 2019; digitalengineering247.com/r/23448), we have reviewed other MSI-built systems branded by other system integrators, notably the GoBOXX SLM 17 (a rebranded MSI WS75).

Why get excited about a new system from MSI? MSI has proven over the past several years that it was very serious about the CAD industry. Before the pandemic shut things down, MSI had a significant presence at most conferences and tradeshows.

It also joined the ranks of companies like Dell, HP and Lenovo in securing independent software vendor (ISV) certification from Autodesk, Siemens, Ansys and Dassault Systèmes, which ensures that the hardware and software are fully stable and compatible for a professional experience. MSI was also the first company to ship a mobile workstation that included an NVIDIA Quadro RTX graphics board.

Outwardly, the new MSI WS66 mobile workstation is similar to the WS65, but it is a fraction larger and no longer sports bronze accents. The WS66 comes housed in a very attractive brushed black aluminum case measuring 14.17x9.75x0.96-in. (WxDxH) and weighs 4.97 lbs. 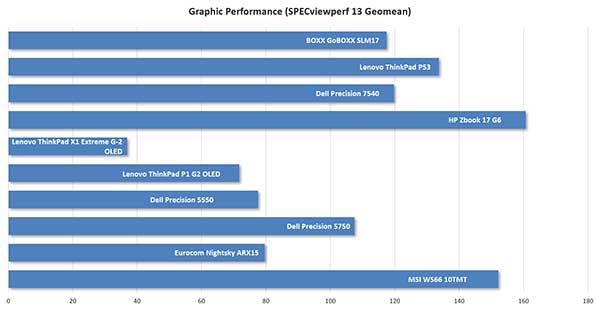 Unlike many other OEMs, MSI does not offer custom configurations. Instead, the company sells preconfigured systems based on specific component combinations. There are currently four configurations for the WS66, all based on various models of eight-core Intel 10th-generation Comet Lake CPUs.

All four MSI WS66 systems use an MH470 chipset, feature a 15.6-in. 1920x1080 touch-enabled display capable of reproducing 72% of the NTSC gamut that in turn is powered by an NVIDIA Quadro RTX graphics board, and include an 84-key backlit keyboard, a 1TB M.2 NVMe solid-state drive (SSD), Wi-Fi and Bluetooth, an SD card reader, an IR 720p HD webcam and a four-cell 99.9Whr lithium-ion battery. All four WS66 models are virtual reality (VR) ready, with the only differences being the specific CPU, GPU and the amount of memory.

But for our review, MSI sent us the WS66 10TMT-207, a system built around the 2.4GHz Intel Core i9-10980HK processor. This CPU has a 5.3GHz maximum turbo frequency, a 16MB cache and integrated Intel UHD graphic, while boasting a thermal design power (TDP) rating of just 65 watts.

With a suggested retail price of $3,999, our evaluation unit also included an NVIDIA Quadro RTX 5000 graphics board, a GPU with 16GB of discrete GDDR6 memory and featuring 3,072 CUDA cores, 384 Tensor cores and 48RT cores. Its 256-bit interface yields a 448 GB/second bandwidth while consuming a maximum of 110 watts.

As we have noted in previous reviews, MSI only sells its systems through authorized resellers who can set their own prices, so your cost may vary.

Lifting the lid reveals the 15.6-in. display and an excellent backlit keyboard with a standard layout. The power button is actually the key in the upper-right corner of the keyboard. An LED in that key glows white when the system is powered on and using the Intel graphics and amber when the discrete NVIDIA GPU is in use. There are also small LEDs on the Caps Lock and several function keys used to control sound and other settings.

An infrared webcam is centered above the display, flanked by a pair of microphones, and can be used with Windows Hello Face to sign into the computer. A gesture-enabled 5.5x2.63-in. touchpad is centered below the spacebar. Although the touchpad lacks dedicated buttons, you can click in the lower-right corner to access right-click shortcut menus. A fingerprint reader is located in the upper-left corner of the touchpad.

MSI appears to be following the trend of reducing the number of ports on its latest system, but the WS66 still offers some features its competitors have eliminated. For example, the right side of the case provides a USB 3.2 Gen 2 Type-C port, an SD-card reader, a 3.5-mm combo audio jack, and a full-size RJ-45 network port.

Though the left side of the case includes just a single USB 3.2 Gen 2 Type-A port, it also contains a Thunderbolt (Type-C) port, an HDMI port, a connection for the AC adapter and a battery status light. There are no other ports—so you may need to factor in a hub, docking station or USB Type-C to Type-A adapter—and the system does not provide an attachment point for a security lock. 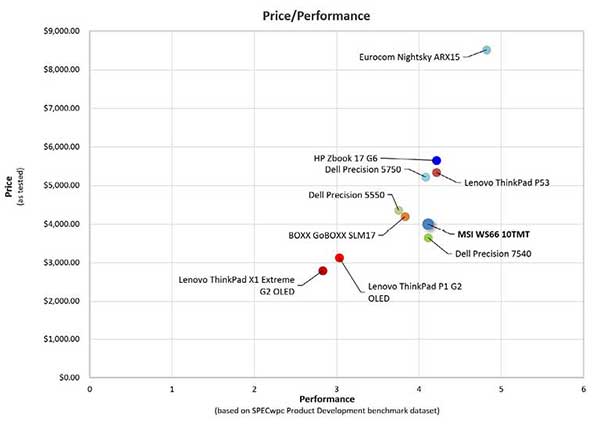 Like most modern thin, light-weight systems, the battery is not removable. But that battery managed to keep our system running for 9 hours and 50 minutes in our battery run-down test, just 40 minutes short of the record.

The MSI WS 66 10TMT-207 remained cool and quiet throughout our tests. At a maximum sound pressure of just 45dB, its internal fans were seldom audible above the 35dB ambient background level in our test lab. We measured a maximum temperature of 114°F on the bottom of the system during our tests.

The MSI WS66 10TMT-207 mobile workstation performed flawlessly throughout our tests. On the SPECviewperf test, which is a measure of pure graphic performance, the WS66 finished a close second to the HP ZBook 17 G6, a 17-in. Xeon-based system priced more than $1,600 higher. On the SPECapc SolidWorks tests, the results were even more impressive, with the MSI WS66 yielding some of the best scores we have ever recorded for a mobile workstation. 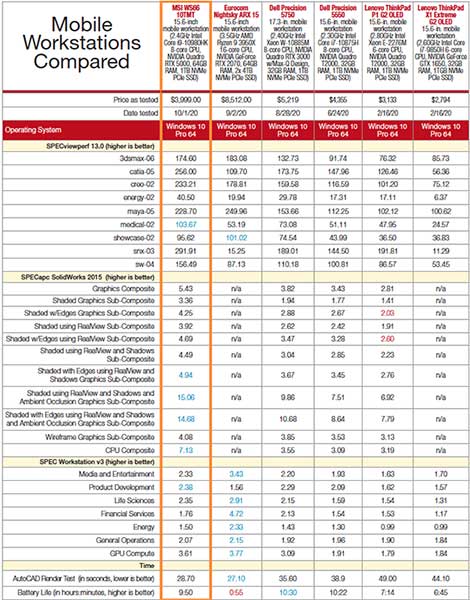 On our own AutoCAD rendering test, a multi-threaded process where fast CPUs with multiple cores have a clear advantage, the 28.7-second average rendering time was just 1.6 seconds behind the record set by the Eurocom Nightsky ARX15, which was based on a much faster CPU (3.5GHz versus the MSI’s 2.4GHz) with twice the number of cores.

MSI preloads Windows 10 Professional 64-bit on all of its WS66 mobile workstations and backs them with a 3-year warranty, two years longer than what now comes standard from major vendors like Dell and Lenovo.

MSI also preinstalls a free copy of its Creator Center software, which optimizes the system for use with various programs (similar to performance tuning software from Dell, HP and Lenovo). In addition to ISV certification, most MSI mobile workstations now also meet MIL-STD-810G standards.

MSI continues to prove that it is serious about being a major player in the mobile workstation market. The new MSI WS66 10TMT-207 is a great, thin, lightweight, VR-capable system that delivers amazing performance at a very attractive price point—a mobile workstation that any engineer would be proud to own.