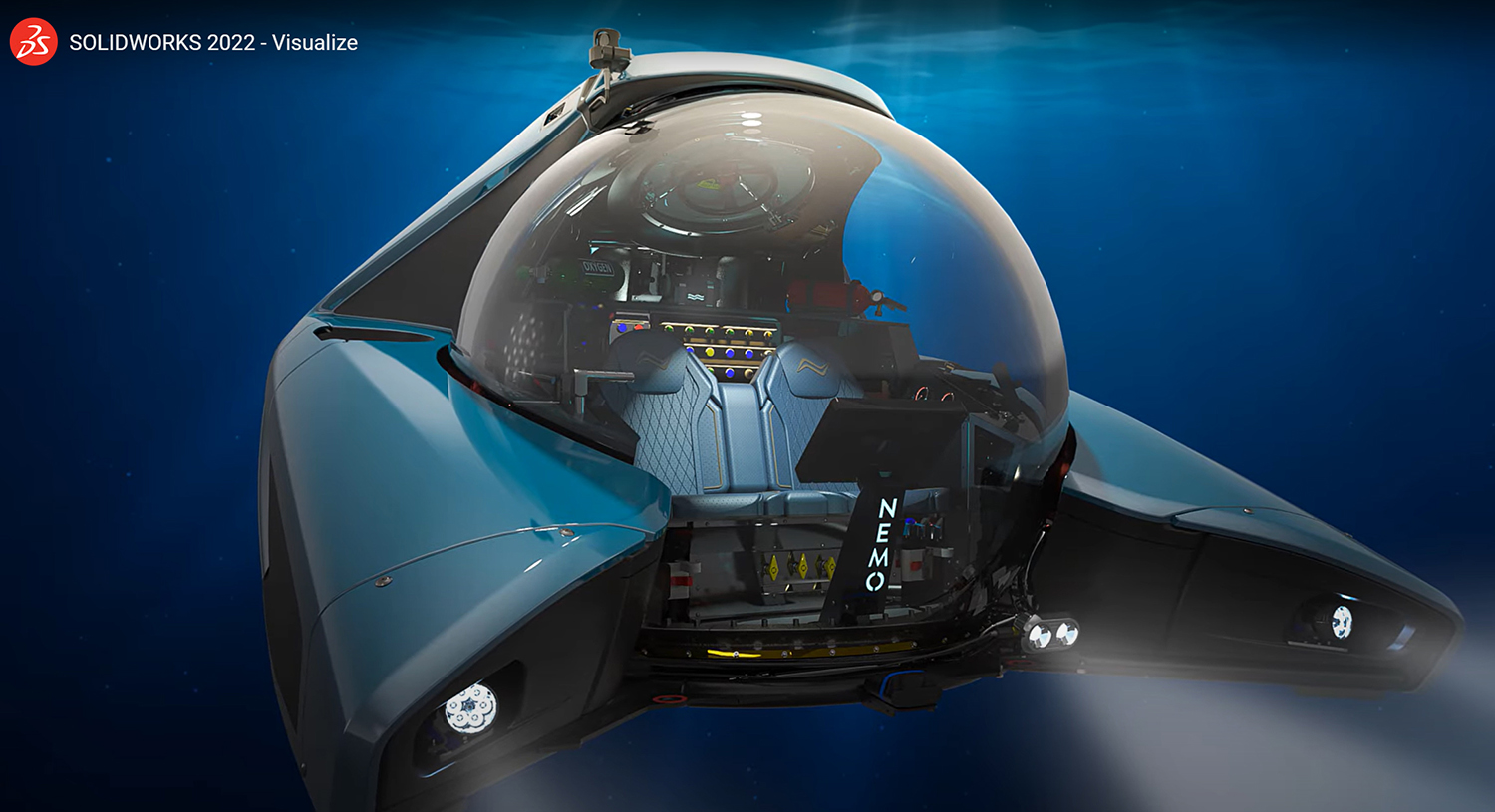 Last week, 3DEXPERIENCE World kicked off as a fully virtual event, with updates on the most recent release of SOLIDWORKS and news of the changing-of-the-guard in the executive suite. During the keynote address, Gian Paolo Bassi, CEO of SOLIDWORKS, announced the passing of the baton to his successor, the R&D veteran Manish Kumar. Kumar joined SOLIDWORKS as a software developer in 2003. Steadily rising through concept development and product management roles, he became VP of R&D in 2018.

3DEXPERIENCE World featured a host of end users describing how they leverage SOLIDWORKS and its associated applications for their engineering projects, along with dozens of technical education sessions. One of the customers highlighted at the event was U-Boat Worx, which uses SOLIDWORKS to design its underwater exploration crafts. The latest model is dubbed Nemo.

“At certain points in time, we are working with roughly 20 different designers so it's important that we all work with the same tool, and we don't interfere with one another,” said Camiel Brandts, Technical and Design Director, U-Boat Worx.

“Last summer, we introduced 3DEX SOLIDWORKS for Makers. It has so far been adopted by more than 11,000 makers,” said Bassi. He went on to announce that NC tools have been added to the SW for Makers with no change in price. The SOLIDWORKS for Makers bundle includes SOLIDWORKS Professional; 3D Creator; 3D Sculptor; and NC shop floor programming tools.

SOLIDWORKS 2022's refinements were mostly in performance and UI, but there have also been enhancements to tools like SOLIDWORKS Visualize and Large Design Review, which rely on NVIDIA RTX™ GPU acceleration.

There were also hardware-focused sessions that explained optimized workstation configurations for SOLIDWORKS users. Dell and NVIDIA were on hand to provide an overview on choosing the right Dell Precision workstation for SOLIDWORKS. You can access the session here.

Jeff Seltzer, Technology Evangelist at Wisconsin-based GSC, provided an overview of the new features for SOLIDWORKS CAD. He noted that the Graphics Pipeline enhanced graphics feature (introduced in 2019) has continued to improve. The enhanced graphics leverage modern NVIDIA RTX™ GPUs to provide faster model manipulation. In the demo Seltzer provided, the software was able to perform these functions nearly 20X faster using the Graphics Pipeline, at 63.09 fps (compared to 3.10 fps with the feature turned off).

“Graphics Pipeline was introduced for 3D models, but has also worked its way into improving drawing performance,” he added. Thanks to these NVIDIA RTX™ GPU-accelerated features, engineers can manipulate very large models and assemblies.

The 3D Nemo model from U-Boat Worx with 6,000 components, for example, opened in merely 13 seconds, according to SOLIDWORKS. In the most recent release, users can open detailed 2D drawings and subassemblies in the Large Design Review mode. Within this mode, a simple right-mouse menu allows users to select and open the fully resolved subassembly models.

The latest version of SOLIDWORKS also now allows designers to edit assemblies in Large Design Review. According to Seltzer, users can now access reference planes and mates in this mode, as well as delete parts, insert components, and change configurations.

“You can also stay in LDR mode as long as you want, and open up drawings in the counterpart DTL mode so you can open those large drawings very quickly,” he said.

There was also a session dedicated to updates to SOLIDWORKS Visualize. Refinements in the UI allow users to move components and assign mating conditions using a drag-and-drop triad. It also allows users to create configurations—variations of the same design.

In visualization, SOLIDWORKS 2022 lets users easily match the proportion and orientation of the 3D objects with the HDRI backgrounds in scene setup. It also allows users to create virtual walls to control shadow casting to match the 2D background.

“Any part of an object geometry can cast a shadow on a backplate image, and you can specify shadow intensity, reflection and roughness values,” said Brian Muhlbach, Product Definition, Rendering Solutions, at Dassault Systèmes.

On average, simulation and analysis in SW 2022 is 27% faster than SW 2021, according to Andrew Gross, Senior Industry Process Consultant, SOLIDWORKS. One reason for the speed increase is, “We've reduced the calculation time to solve individual contacts,” he said.

You can access 3DEXPERIENCE World sessions and replays here.