NUMECA has introduced version 8.1 of its Fine/Acoustics integrated software suite for aero- and vibro-acoustics simulations. Shown here is an acoustic pressure field of an axial fan. Image courtesy of NUMECA International S.A.

NUMECA is recognized today as the most innovative company in the field of Computational Fluid Dynamics (CFD) and multiphysics design, analysis and optimization. Driven by creativity, innovation & quality, we proudly...
NUMECA
Company Profile

NUMECA International has announced that version 8.1 of its FINE/Acoustics integrated simulation suite for aero-acoustics and vibro-acoustics analysis is now available. This new version focuses on user-friendliness and robustness, in particular for turbomachinery applications, according to the company. NUMECA adds that the highlight enhancement is a new wizard that enables fast and accurate turbomachinery broadband and tonal noise analyses.

NUMECA describes FINE/Acoustics as engineered for a range of industrial applications and, the company adds, the software can be used for rapid pre-design calculations as well as large-scale analyses. For tonal noise studies, it provides for simultaneous noise source and propagation analyses using the Non-Linear Harmonic (NLH) method. The Turbomachinery Wizard, explains NUMECA, enables users to set up and then automatically run and post-process aero-acoustic analyses of tonal and broadband noise for turbomachinery configurations (axial, radial or mixed-flow). Its main advantages for users, the company says, include minimal user inputs, rapid and detailed acoustics results as well as reduced design cycle costs.

NUMECA has also enhanced FINE/Acoustics version 8.1 with the addition of more functions to its Python API (application programming interface) to extend the scripting and automation of workflows.

NUMECA advises current users to check out the version 8.1 release notes in the customer area for important changes in this release. FINE/Acoustics version 8.1 comes with documentation included in the package, available in the customer area on the website. FINE/Acoustics and other NUMECA simulation software are now also available through the cloud on demand.

Click here for the highlights of the FINE/Acoustics version 8.1 release.

Watch a demo of the Turbomachinery Wizard.

Read how FINE/Acoustics is being used to study the noise of exhaust mufflers.

See why DE's Editors selected FINE/Acoustics version 8.1 as their Pick of the Week. 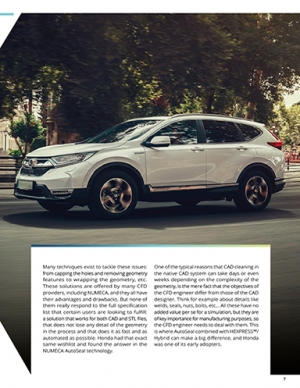