Software companies are finding ways to accelerate CAD with GPUs beyond graphics and rendering.

Software companies are finding ways to accelerate CAD with GPUs beyond graphics and rendering. 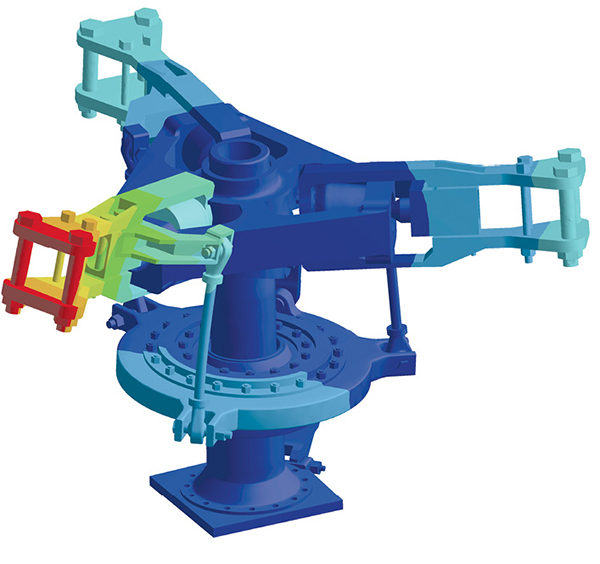 Making the Case for a Workstation-Centered Workflow
The heart of an efficient engineering workflow is a professional workstation.
Sponsored Content

There was a time when a graphics card was only added to a workstation to rapidly display graphics. Today, design engineers are not only creating more realistic renderings of their models—which requires a powerful graphics processing unit (GPU)—but also using simulation and analysis software upfront in the design process.

There are new use cases for GPUs in product design, including running artificial intelligence (AI) routines for design exploration and creating machine learning algorithms that will become part of a product. The shift can be summarized as going from throwing graphics on the screen to calculating the design and engineering issues behind the objects.

The relationship between product engineering technology and computer processors is not new. CAD and simulation software perform complex and changing mathematical tasks that must be solved sequentially. CPUs are optimized for this kind of serial computation complexity. GPUs have been optimized for parallel processing, where the same algorithm can be performed over and over.

Today the lines are blurring. Software vendors are finding ways to integrate powerful GPUs into the CAD workflow. GPU performance has grown much faster than CPU performance, outstripping Moore’s law. GPU vendors AMD and NVIDIA are shipping utilities that help GPUs participate in new workflows. Companies that would create a rendering farm of networked PCs to create photorealistic images or animations in the past can now use GPUs. The price/performance comparisons are also shifting; for software that supports GPUs for advanced rendering, it is now cheaper to assemble a set of GPUs for rendering than to create (or rent on the cloud) a render farm.

There are three main categories where the increased use of GPUs in design engineering is now advantageous, says Brian Hillner, the senior product portfolio manager for SolidWorks Visualization at Dassault Systèmes. The first is the existing use case of GPUs for speed of rendering and fidelity of modeling tasks (draw, edit, zoom, pan, rotate). SolidWorks and several other CAD or image processing software products have added support for NVIDIA’s new AI-based denoising technology, which reduces the “grainy” look in images.

Dassault Systemès SolidWorks uses GPUs to process topology optimization. This image shows using an optimized shape as a reference overlay for use with an existing design. Image courtesy of Dassault Systèmes.

“SolidWorks Visualize can create 10 times as much content in the same amount of time,” says Hillner. A set of product images that once took months to render with complete fidelity and no noise can now be created in weeks or days. It means more options and opens the door to complex rendering of scenes for virtual reality “and other ways to make the product shine. Users are shaving months off design because they can see photoreal views in real time,” he adds.

The second use case for increasing GPUs in an engineering workflow is the computation of parallel processes, which covers many simulation tasks. “Doing the same math over and over is perfect for GPUs,” says Hillner. Depending on the physical process being analyzed, GPUs can offload some or most of the computation.

The third use case is AI as a design tool. “Instead of sketching what might be the right shape, use AI and crush all the possible scenarios on the GPU,” says Hillner. Several software vendors are bringing new topology optimization methods into their software for this. Dassault Systèmes calls it design guidance; others refer to it as generative design.

PTC sees bringing GPUs into CAD workflows as a necessity to stay competitive. “From AI to HPC (high-performance computing) and GPUs, we have the ability to open up opportunities for generalists and designers who don’t have the luxury of waiting for simulation results,” says Mark Fischer, senior director of Creo Product Management. “To democratize simulation as part of the design process is the goal.”

“We continue to look at where GPUs will play a role,” Fischer adds. “Not everything needs to go to GPU. As these cards continue to improve, we are working in parallel to take advantage of improvements.” It is a strategic process, Fischer says, in which even legacy CAD processes are being reexamined in the age of the GPU. “We don’t want to stay status quo; new releases will continue to implement GPUs into our processes.”

New Kids on the Block

Three young companies are leading the trend of adding topology optimization to CAD workflows. Frustum, nTopology and ParaMatters differ in the details of how they optimize design, but all three use GPUs and AI-based processes to solve hundreds or hundreds of thousands of design alternatives in what generally is a real-time process.

“Frustum has no legacy [in CAD’s CPU-based history], so we get to think about how to fully utilize GPUs from the start,” says Jesse Blankenship, the founder and former CEO of Frustum, which was acquired in late 2018 by PTC. “Bringing AI and design optimization to designers makes it an interactive process, just like a parametric model.” 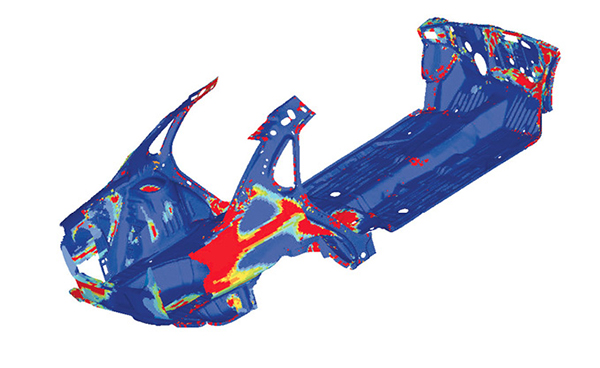 Altair OptiStruct on GPU-accelerated systems enables scaling for large models, particularly noise, vibration and harshness models, that may run poorly or not at all on CPU-based systems. Image courtesy of Altair.

As PTC’s acquisition of Frustum shows, established engineering design software providers are taking GPU optimization seriously. For example, Altair recently announced its OptiStruct structural analysis solver now runs up to 10 times faster on NVIDIA GPUs “with no compromise in accuracy,” according to a press release from the company. The company states the speed boost “has the potential to significantly impact industries including automotive, aerospace, industrial equipment and electronics that frequently need to run large, high-fidelity simulations.”

Support for GPU acceleration began with OptiStruct’s direct solver and with the large-scale noise, vibration and harshness (NVH) solver AMSES, a standard feature of OptiStruct. AMSES cuts the time required to compute eigenvalues for analysis in NVH simulations, calculating thousands of modes with millions of degrees of freedom. Next, the development team ported OptiStruct’s preconditioned conjugate gradient (PCG) iterative solver to the NVIDIA GPU-accelerated system. For some models—such as compact, block-like, solid structures—Altair says the PCG solver “can be faster than the direct solver, especially when GPUs are in play.” The test suite includes a variety of industry models including multiple solution types such as statics, frequency response, buckling and optimization.

Altair used the NVIDIA Quadro GV100 for the solver runs, which were compared with the use of dual Intel Xeon Sandy Bridge-EP 3.1GHz 16-core CPUs with 256GB of RAM. Run times compared were total elapsed times, or wall times, for the solution to complete.

“This breakthrough represents a significant opportunity for our customers to increase productivity and improve ROI (return on investment) with a high level of accuracy, much faster than was previously possible,” says Uwe Schramm, Altair’s chief technology officer for Solvers and Optimization.

Some companies want to use GPUs locally; others prefer to tap into cloud or other virtualization setups when they need advanced GPU support. ANSYS uses them all. It launched the popular Discovery Live in 2018, which uses local NVIDIA GPUs to support what it calls real-time analysis. The company is also certified to support virtualization environments, hypervisors and server-based graphics configurations. 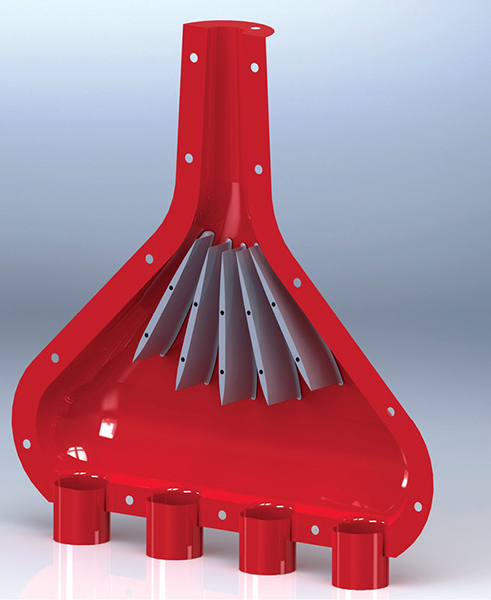 ANSYS Discovery Live uses GPUs to calculate and display simulations in real time. Uses can move between a data-driven view and the final rendered image. Image courtesy of ANSYS.

“If problems pop up we can reproduce the issue,” says Wim Slagter, director of HPC and Cloud Alliances at ANSYS.

“STL is a 30-year-old format that, while helping to launch the 3D printing revolution, now serves as a major bottleneck in additive workflows,” stated Dyndrite in its initial product announcement. “STL files are difficult to safely modify and typically require time-consuming manual repair work prior to being used. Additionally, their fixed reliance on triangles limits the precision of the workflow model and the output quality.”

“GPUs are fast but lack the infrastructure to do geometry,” says Shawn Hopwood, Dyndrite chief marketing officer. “There needs [to be] something on top of the kernel.” Thanks to NVIDIA’s Maxwell generation of GPU technology, Hopwood says Dyndrite can run a full geometry kernel on top of the GPU.

“What we see [in 3D processing] is what happened in 2D when Adobe created PostScript,” adds Hopwood. “Computing has gotten to the level where we can operate and compute what goes to the screen.”

The new company has the support of some familiar names in engineering software. “I’ve known [Dyndrite co-founder and CEO Harshil Goel] for quite a few years,” says former Autodesk CEO Carl Bass. “I believe that he and his team are taking a very fundamental approach to solving a class of problems even broader than current generative design use cases. Dyndrite has the opportunity to transform an industry and power some pretty awesome next generation workflows.”

The push to improve CAD workflows with GPUs is not limited to solid modeling. Autodesk says it is also taking advantage of GPU technology to improve AutoCAD, the venerable drafting software.

“What do customers do the most? Pan, zoom, move,” says Marcus O’Brien, director of the AutoCAD product line. “They want to see a specific object at a specific orientation.” For users who have upgraded to AutoCAD 2020 and use a GPU, O’Brien says they can navigate drawings “10 times faster than AutoCAD 2016.”

Compared to simulation in real time, increasing the speed of drafting processes may not come across as cool, but O’Brien says “all the small things that happen in the background” are important. AutoCAD 2020 also uses GPU technology, if available, to increase the speed of hatch rendering. Hatching is traditionally the most computationally heavy aspect of drafting. “At the high level people talk about the glamour of high resolution,” O’Brien says. “But don’t forget the efficiency to the customer.”