A look back at some of the finer contributions of DE's founding editor, Tony Lockwood

A look back at some of the finer contributions of DE's founding editor, Tony Lockwood 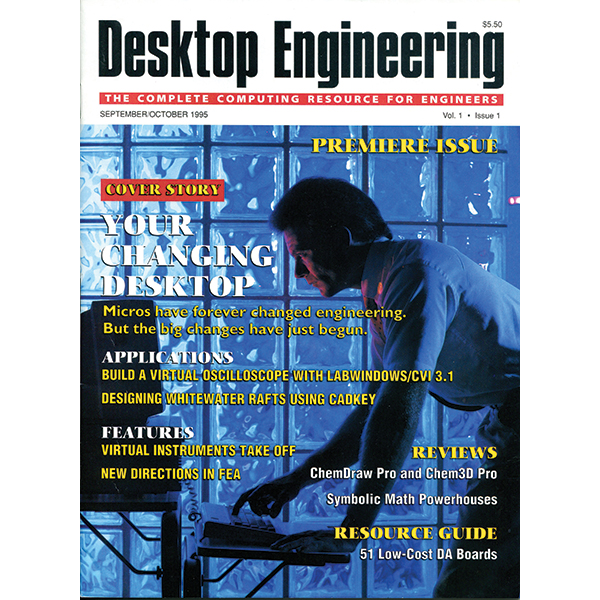 The cover of volume 1, issue 1 of Desktop Engineering magazine from September 1995.

Energizing Turbomachinery Innovation with Additive Manufacturing
Leading-edge turbomachinery manufacturers are overcoming industry challenges and accelerating the speed of innovation with 3D...
Optimism at AMUG 2022
People want to see the hardware in action and (more importantly) make connections with potential...
Welcome to Space 4.0
Digital simulation and testing are key to the future of space exploration.
AM for Passive RF
How additive manufacturing is pushing the boundaries of RF passive hardware.
More Opinion

In 2010, as DE celebrated its 15th anniversary, we enlisted founding editor Tony Lockwood to share his thoughts on how and why the magazine was created. You can read them all here. One of the lines that stuck with me is near the end: “News and information about products and technologies that you need never needed to be boring, as it was before Desktop Engineering.”

The design engineer’s job has changed quite a bit since the magazine’s founding, as reflected when we replaced “Desktop” in the name of the magazine with “Digital” in 2016, but the heart of the magazine that Tony helped create remains the same. Creating something new and figuring out how to make things work better is exciting. The ever-changing technology and tools used to do that are amazing. As Tony put it: “Engineering is fun,” and the magazines, websites and newsletters DE produces should be as well.

Since stepping down from full-time editing duties, Tony has authored DE’s Editor’s Pick of the Week and Check it Out newsletters. In them, he practiced what he preached, peppering the newsletters with observations you wouldn’t see in engineering research papers or product announcements. Among DE’s staff, these nuggets became known as “Lockwoodisms.” Below are just a few from the past year.

“Engineering workstations are changing faster than RuPaul’s runway attire. Like RuPaul, much of it is in the graphics with raw power sharing the lead.”

Some of DE’s original contributors look back fondly on their time working with Tony Lockwood.

“In mid-1996, I saw a notice in a newsletter called Freelance Writer’s Report about a new (1995) trade magazine called Desktop Engineering. Since I was an engineer and freelance writer, I decided to pitch a story on software interoperability challenges and an editor named Tony Lockwood bought it on spec. I liked working with him and he seemed to like working with me, so when he suggested an assignment on the topic of rapid prototyping, I said, ‘OK … What’s that besides making something really fast?’ He pointed me to a source named Terry Wohlers and said, ‘Talk to him. You’ll do fine on this,’ and that was the beginning of 20 years of working with Tony on great projects.

“Some time went by before I met him, and when I did, he presented me with a DE thank you bottle of New Hampshire maple syrup. I told him it was the best gift ever and that clearly I was working with good people! Nothing ever ruffles Tony. He gives you confidence that a project will work out, he trusts that you’ll get the job done without micro-managing, and he has one dry sense of humor. Many thanks. I wish him the absolute best in his next adventure.”

“Tony banks experiences much like other people collect memories. When it came time to create DE, he was the right person, in the right place, at the right time. Likewise, when friends of his find themselves in a jam, he seems to know just what to say and do. Both professionally and personally, he makes a difference. Have fun in retirement, Pal. You deserve it.”

“I’ve known Tony for so long that I can’t put a date to it. I tried to find our earliest email exchanges but they happened so long ago that not even I—a compulsive data hoarder—can find a trace of them. (They were probably conducted on BIX.)

“Across the years we collaborated on countless articles and had many long phone chats about politics, about retreating to the men’s room to read articles out loud in a wacky John Cleese voice, about walking poodles while wearing short shorts and, occasionally, about the subject matter of an actual article.

“Tony taught me not to worry overmuch about lede paragraphs, because the editor’s always going to change them anyway.

“Scrap, rework and especially the dreaded recall are the ghouls that bedevil the design and manufacturing biz. And as mortals are learning quickly, metal additive manufacturing (AM) comes with its own witches’ brew of deformed and warped nightmares.”

“I’m circumferentially challenged. I routinely weigh improving my ingestion processes by staring into the fridge ... Stupid analysis paralysis like that is one thing. Staring at your manufacturing processes and being unable to decide how to integrate high-strength additive manufacturing (AM) into your workflow is a high-stakes gamble.”

“Additive manufacturing cognoscenti can get their knickers in a twist over the pros and cons of DLP (digital light processing) technology vs. other methodologies that also use light to build 3D parts. Sorry, no such partisanship today.”

“It’s like a futuristic Socratic skull session: You both pose questions and together work toward an optimal design.”

On the Internet of Things:

“Everybody’s talking about the industrial internet of things (IIoT). But, oy! What a tangled web we weave when first we practice to IIoT.”

On automated pre-processing and meshing:

“I microwaved some ready-made mashed potatoes the other day. In a zap, six traditional, time-eating preparation steps were history. It was a life-changing experience.”

“Not so long ago a bit of structural or flow analysis functionality embedded in CAD—or otherwise readily CAD-accessible—rocked the design engineering world’s boat. The druids of analysis thundered that it was like handing toddlers heavy weapons. Some CAD jocks were irked that once again they had to do somebody else’s job without the training. Yet the idea caught on, evolved and now simulation-driven design has become the wave of the future.”

“Do you love playing ‘Where’s Waldo?’ while hunting for differences between a master and a derivative file to validate that the copy is a trustworthy representation?”

“Mark Twain loved to hate his type-writer [sic]. He cussed his ‘newfangled writing machine’ as devilish and degrading his morals. Yet he was smitten by its potential from first click. He boasted about being the first person to ‘apply’ it to literature. New technology and operator befuddlement often engenders such emotions, especially as you transition to new ways of doing something you think you know how to do.”

Not everyone was a fan of Tony’s writing style. I still remember an email from a very concerned reader who wanted to inform Tony that “ain’t” is not a word. Years later, another reader wrote to let me know he was sick and tired of being called “pal.” Tony closes each of his messages with “Thanks, Pal,” and this particular gentleman was “not his pal” nor did he have any interest in becoming his pal.

But, those were the exceptions. As a rule, you told us time and again how much you enjoyed Tony’s take on the latest design engineering news. Lockwood’s insights will be missed, but we’ll take his advice to heart as we continue to expand upon what he started.

Before signing off, check out Tony's last diatribe to DE readers here.

If you’d like to reach Tony to wish him well in retirement or argue the finer points of grammar vs. style, you can send an email to [email protected]. We’ll make sure to pass them along.