New center will develop high-temperature materials along with the corresponding manufacturing processes.

New center will develop high-temperature materials along with the corresponding manufacturing processes. 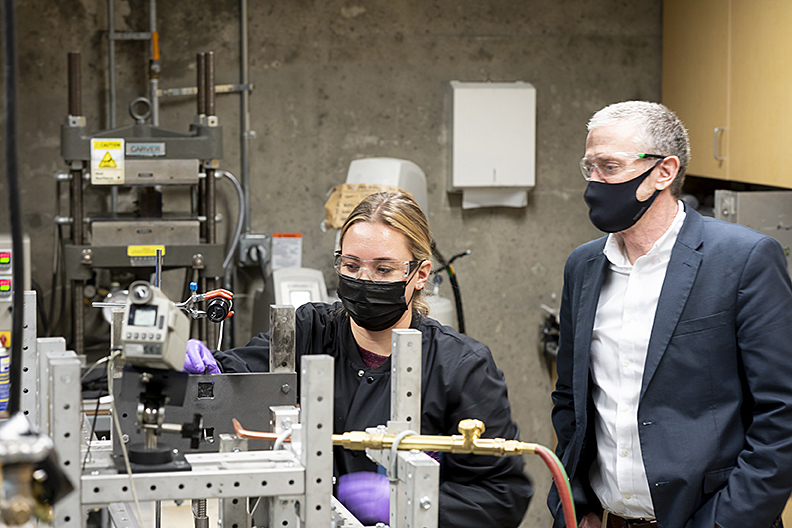 Simulation of Ultrasonic Non-Destructive Testing of Composite Materials
This white paper provides an overview of how different NDT techniques can be modeled and...
Designing for Communication Systems
In this special digital issue, we compile articles and other content focused on designing for...
Test Resources

Hypersonic vehicles—those that travel at velocities more than five times the speed of sound—dictate some serious heat requirements for materials. Purdue University, a mecca for advanced engineering research, is diving in with plans to expand its hub for hypersonics research with the addition of a center focused specifically on high-temperature materials and the corresponding manufacturing processes.

Purdue is already the planned home for the 65,000-square-foot, $41 million Hypersonics and Applied Research Facility (HARF), which broke ground last year, and the new Hypersonics Advanced Manufacturing Technology Center (HAMTC) will be part of this single-focused location. HARF is slated to house the only Mach 8 quiet wind tunnel in the world, which closely simulates flight and is said to provide more accurate data than conventional hypersonic wind tunnels. There will also be a HYPULSE tunnel, a controlled environment to research different facets of high-speed flight, including flight simulations at speeds ranging from Mach 5 to as high as Mach 40.

The U.S. Department of Defense has made hypersonics systems a top priority since their velocity helps mitigate the potential for any adversary’s ability to detect, track, target, and engage. The Fiscal Year 2022 President’s budget requested $3.8 billion for hypersonics-related research, up by 20% over the $3.2 billion in fiscal year 2021.

The HAMTC addition to HARF will focus on materials and manufacturing innovations, including facilities for testing, catering to partners that include GE Additive, Dynetics, Lockheed Martin, Aeroject Rocketdyne, Boeing, and GE Edison Works, among others. The work is aimed at increasing the temperature capabilities of materials using new compositions and to create new manufacturing routes that will be able to output those complex geometrical designs, officials said.

“When you heat up 3,000 degrees Fahrenheit, small differences in expansion can cause large stresses between components made of different materials that may result in the failure of hypersonic vehicles,” said Michael Sangid, executive director of HAMTC and the Elmer F. Bruhn Professor of Aeronautics and Astronautics at Purdue, in a writeup describing the center’s agenda.

GE Additive, which will serve as the primary partner for AM at the center, sees huge potential for the technology to advance manufacturing in hypersonics. It will provide AM systems that are customized to meet the needs of the new materials and processes developed at HAMTC.

HAMTC leadership and partners stressed the importance of the center’s ability to serve as a vertically integrated supply chain to push the boundaries of design in this area. Having design, manufacturing, joining, and testing capabilities located in a single site reduces the time and cost necessary for development of hypersonic components and sub-systems while also fostering innovation through academic engagement, officials said.

The center is also touting the potential for its work to drive applications for consumer products and other industry applications, including green energy and aerospace transportation.

Watch this report to learn more about the importance of hypersonics research to the country along with an update on Purdue University's plans.