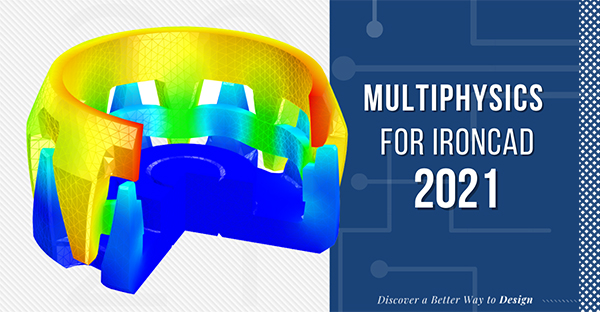 Digital Engineering July/August 2022
Our July/August issue focuses on innovations in medical device design, including new materials, the...
Editors Pick of the Week Resources

IronCAD LLC introduces Multiphysics for IronCAD (MPIC) 2021, an update of the multiphysics finite element (FEA) simulation application integrated into IronCAD. To use, the designer adds material, forces and constraints to an IronCAD model and then selects “Auto Solve” to generate analysis results.

For the 2021 update, IronCAD says it has included several key technologies specific to CAD analysis. The focus is on general CAD designers who want to adopt design analysis earlier in the digital prototyping cycle. “As such, more of these improvements are in the assembly analysis functionalities,” the company notes.

MPIC uses tolerance assembly meshing to unite assembly parts. For 2021, this technology has been enhanced with improvements to element silhouette display, to identify the solid model’s face, edge and vertex recognition from the discrete union processes. Compared to traditional finite element analysis displays, only the recognized face edges are shown, to clearly visualize the discrete model rather than showing a large amount of finite element edges, which can complicate the scene.

In silhouette mode, if the assembly is meshed and discretely jointed properly, there will be additional edges/vertices between the union parts. IronCAD says the silhouette model will clearly show these newly generated and identified geometry details for easier review.

Easier review means the user can examine the discrete union’s correctness. IronCAD also says this speeds up rendering the discrete model, by removing the voluminous element edges. For large models with millions of elements, using silhouette mode can mean much faster rendering, review and animation.

Multiphysics for IronCAD 2021 will be available for preview by users on subscription during the fourth quarter of the year.