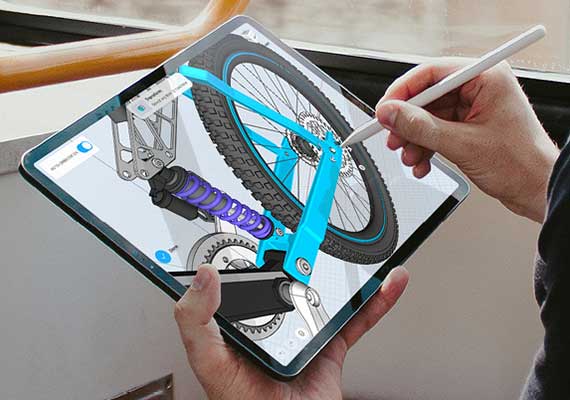 Shapr3D takes advantage of the iPad’s Apple Pen for a more natural way to draft and draw. Image courtesy of Shapr3D.

Last November, when PTC prepared to buy Onshape for $470 million, PTC’s President and CEO Jim Heppelmann noted it would be “the biggest acquisition PTC has ever done thus far.”

But this was more than the typical big-fish-swallows-small-fish acquisition.

“We believe CAD and PLM will go to SaaS [software-as-a-service]. We just can’t understand why that won’t happen,” Heppelmann says.

If Onshape’s browser-based CAD represents the future and the way things will be, desktop products mostly represent the status quo. But it’s a tradition that won’t go quietly into the night.

The Many Shades of Cloud CAD

Desktop CAD software is the established norm; it still remains the preferred option for many CAD users. It has to be fully installed on the user’s hardware, most likely a workstation. Its performance is determined by the CPU and GPU horsepower and the memory footprint of the hosting hardware. It’s designed to be used on a personal machine; it’s not typically accessible from the web.

Browser-based CAD software, such as PTC’s Onshape, needs no installation. It’s architected from the start to run from a browser, much like Facebook or a Google Doc. Therefore, its performance depends more on the internet connection than the horsepower of the user’s own hardware. Browser-based CAD tends to come with cloud storage, which allows users to upload and manage their project files online. It can be accessed anywhere, using any device, provided it connects to the web.

Thin-client CAD, or app-style CAD software works much like a smartphone app. A small program—the absolute minimum required to operate the product—is installed on the user’s machine, but most of the functions are delivered remotely over the web. Typical consumer PCs, mobile tablets and smartphones can host the client app, but they need a good internet connection to run the app. Without an internet connection, the features available are limited to a bare minimum, or none at all.

Thick-client CAD software such as Autodesk Fusion 360, must be installed on the user’s machine, with additional features made available from the cloud. The locally installed program facilitates the software’s primary functions; therefore, the program’s performance is dictated by the user’s hardware specs. The user can run the software offline, but specific cloud-driven features will be inaccessible during that time.

Legacy data and desktop classics are expected to remain. Though virtualization, remote software and other cloud solutions have gained a foothold, when it comes to 3D modeling, the desktop products with their stable, consistent, predictable performance still remain the norm in many design and engineering firms.

Nevertheless, hybrid desktop-cloud products are emerging. Perhaps they are the necessary steppingstones for those who are not ready take the leap of faith into the unknown. For most users, it’s all about the market’s current choices and use cases that determine their preference.

Onshape is built from the ground up to run in the cloud from the browser. The team behind it feels it makes a difference compared to desktop programs that were subsequently converted to run on a cloud-based architecture.

As a browser-based product, Onshape runs on any device—lightweight or heavy-duty, consumer grade or professional, Windows or Mac—but it might surprise you to know the graphics processing unit (GPU) in your local machine can boost its performance.

“If you have a better machine, the software gives you better performance. That’s because it’s architected to take advantage of your local GPU,” says John McEleney, co-founder of Onshape.

Modeling on the iPad

Most people might not think of the Apple iPad as a 3D modeling device, but Shapr3D is poised to change that. The software follows the direct-modeling method, pioneered by products such as Ansys’ SpaceClaim.

It also offers ways to interact with parametric modelers through support of neutral 3D formats (OBJ, DWG, DXF, IGES, STL, STEP and more). The key to its user interface (UI) is the Apple Pen, which gives you a more natural way to draft and draw complex 2D profiles, splines and curves.

Regarding choosing iOS, István Csanády, founder and CEO of Shapr3D, says, “iPads are incredibly powerful and their performance is doubling every year. The latest iPad is as powerful as a few years’ old desktop workstations.”

Now, he is also looking toward Windows OS, the territory of mainstream CAD programs.

“We plan to release Shapr3D for Windows by the end of 2021,” says Csanády. “The iPad, Mac and Windows versions are going to be feature-comparable, except, of course, some OS-specific features, like AR [augmented reality] on the iPad.”

With tools for Boolean operations, constraints and snaps, Shapr3D is a robust environment for geometry modeling. What it lacks are the basic simulation and rendering tools included in many mainstream CAD programs. But then again, most mainstream CAD programs don’t come with a $20-per-month price tag like Shapr3D Pro. The Basic version is free, and even the Pro version is free for one year for students and faculty members of educational institutions.

In its current form, Shapr3D is not a replacement for a standard CAD program such as SolidWorks or Autodesk Inventor. Still, as a quick concept modeler, Shapr3D is more than adequate, an ideal pre-CAD modeler.

“Over the next few years Shapr3D will mature to a full-featured CAD system. We plan to add many more features, including more sophisticated modeling workflows, photorealistic rendering and others,” says Csanády.

Many feel a full-featured CAD program is too much of a hassle for quick concept exploration. In architecture, construction and engineering, the widespread appeal of SketchUp, a concept modeler, surpasses that of other professional building information modeling tools such as Autodesk Revit.

ECAD in the Cloud 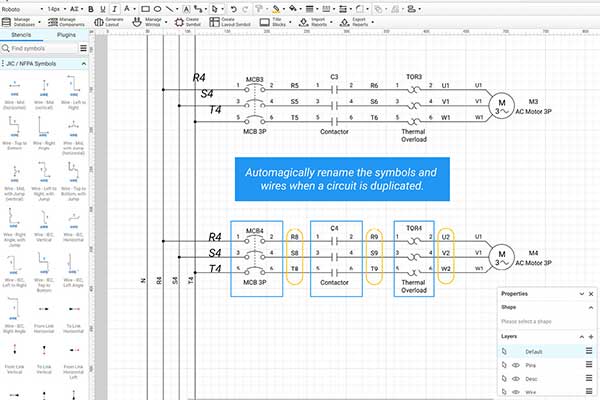 “In 2015, we made a decision to fully commit to cloud and developed an editing engine at vecta.io. We wanted to bring the best of cloud computing, including easily sharing, modern JavaScript-based technology and all the advantages of the cloud to electrical engineering,” says Thomas Yip, CEO of Radica Software.

The cloud version runs best from a browser over high-speed connections, but, according to Yip, “when there is no internet connection, Electra will save the data locally so that it can sync the data when it is back online. We also designed Electra to be able to work on low bandwidth, yet still achieve desktop performance.”

Electra E9 and Electra Cloud share the same code base; therefore, you can exchange native files between the two. Electra can also exchange data with mechanical CAD programs via DXF export, as well as DXF and DWG import.

From Desktop to Thick Client

The latest offerings from Dassault Systèmes unveiled as part of its SolidWorks brand update include 3D Sculptor, a browser-based subdivisional modeler; and 3D Creator, a cloud-based 3D modeling and collaboration program.

“The next generation of designers and engineers are growing up with instant access to everything from a variety of devices—documents, spreadsheets, videos and TV. There is no reason for them to expect any different when it comes to product development software. In fact, it isn’t restricted to just the next generation; this is being demanded and utilized today,” observes Mark Rushton, Dassault Systèmes SolidWorks product portfolio manager. 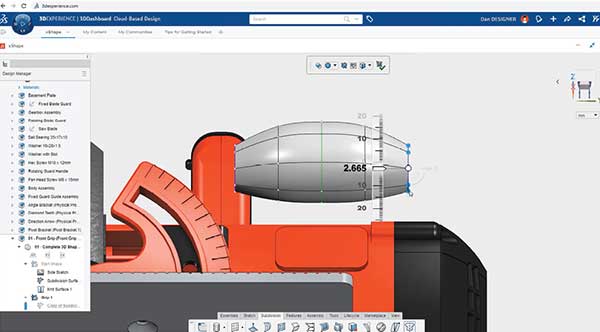 Dassault Systèmes also offers a trial version of its mainstream CAD package SolidWorks from the cloud (SolidWorks.com/online-product-trials), proving it has the ability to deliver the whole product from the cloud if it chooses to. The product is also available for short-term subscription licensing, mirroring the way SaaS products are marketed. But don’t expect the company to offer browser-based SolidWorks anytime soon.

“Doing this is great for a trial but as a solution, it’s missing out on a lot of opportunities,” Rushton says.

Dassault believes it needs to offer new products built from the ground up to address different problems.

“The browser-based 3D Creator and 3D Sculptor are the precursors of a new lineage of SolidWorks products—many more to come. We are not simply re-engineering CAD applications but literally inventing a modern way to develop virtual twins that rely on generative and AI-assisted algorithms and automation, tight integration with multiphysics simulation all the way into material science and manufacturing,” Rushton says.

Just like its closest rival Autodesk Inventor giving birth to Autodesk Fusion 360, SolidWorks is also morphing into something tightly coupled with cloud-hosted features.

“Our latest version of SolidWorks fits by all accounts the definition of thick client. It is licensed, installed, updated and fully connected to the cloud services of the 3DEXPERIENCE Platform,” notes Rushton.

Converting a historically desktop-installed product to a thick-client product does entail some compromises, but for the better for many, Rushton believes.

“For instance, you lose the need to manage who has which licenses assigned to them. It’s all handled through the 3DEXPERIENCE Platform Administrator Dashboard. You also lose the requirement of an on-premise server to store all the data securely and manage its revisions. I doubt anybody would regret these losses since you gain the efficiencies and security of data in a state-of-the-art cloud infrastructure with the highest security standards,” he says.

Then the Pandemic Happened

The move from the desktop to the cloud is gradual and incremental, but the pandemic might be behind its acceleration.

“A confluence of existing factors driving cloud transition has been further accelerated by the COVID-19 crisis: Cloud spending rose 37% to $29 billion during the first quarter of 2020. This trend is likely to persist, as the exodus to virtual work underscores the urgency for scalable, secure, reliable, cost-effective off-premises technology services,” according to PricewaterhouseCoopers.

Rushton says, “Work has to continue when people are not in the office, and companies want to benefit from talent that is not necessarily centrally located, so leveraging knowledge and knowhow from wherever it may be, is where the 3DEXPERIENCE platform on the cloud comes into its own. And the best part of the new 3DEXPERIENCE Works Portfolio is that, whether our customers decide to stay on desktop, connect to the cloud, or run in a browser, they are guaranteed that all assets are compatible.”

ODA Offers Conversion of Point Cloud Data to Revit and IFC
The Scan to BIM SDK will convert point cloud data from 3D laser scanners into parametric Autodesk Revit models.
How Simulation Impacts Innovation in Design
Simulation brings many benefits to design engineering—but it’s not a one-size-fits-all option for certain use cases.
Transporting PLM to the Cloud
Cloud-based PLM can provide the flexibility and accessibility needed for digital transformation.
Preparing for the Next Mega Disruptor
Pandemic pushes manufacturing toward digital twins and the cloud.
Enter the Holodeck: Designing in a Virtual World
The gaming industry has long been big business, but thanks to virtual reality technology, it is now taking us where no one has gone before. Are product design and manufacturing the next frontier?
Autodesk Company Profile

How Simulation Impacts Innovation in Design
Simulation brings many benefits to design engineering—but it’s not a one-size-fits-all option for certain use cases.
Transporting PLM to the Cloud
Cloud-based PLM can provide the flexibility and accessibility needed for digital transformation.
PTC and Volvo Group Form Digital Engineering Collaboration
Volvo Group’s use of PTC technologies to establish a digital thread of connected data to drive productivity across all levels of the organization, companies report.
Digital Thread Accelerates Connected Car Development
Digital transformation of the automobile will require a new design approach.
Matterport and PTC Open up Ability to Create AR Experiences for Large Spaces
Customers can now enrich digital twins captured with the Matterport platform with interactive AR experiences called Area Targets.
PTC Company Profile