The company’s new Nightsky is fast, loud and expensive.

The company’s new Nightsky is fast, loud and expensive. 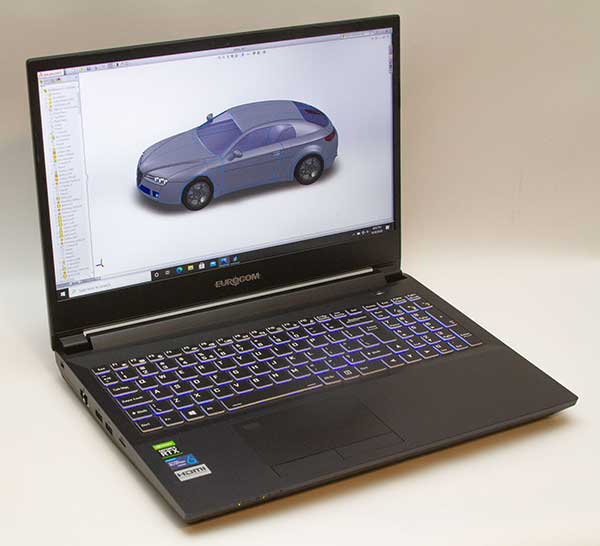 The Eurocom Nightsky ARX15 may be fast, but it is also loud, has terrible battery life and may be incompatible with features of some MCAD software. Image courtesy of David Cohn.

Canadian system integrator Eurocom has always impressed us with its ability to deliver some powerful mobile computers. The company’s Tornado F5W, which we reviewed last year (DE, April 2019) blew us away, delivering some of the fastest performance we have ever recorded for a laptop.

We were quite excited when we received their newest mobile system: the Eurocom Nightsky ARX15. Billed as “the world’s first super laptop powered by an AMD Ryzen 3000 series desktop processor in a laptop form,” we expected great performance but anticipated the use of desktop components would result in reduced battery life. But it was not that simple.

Eurocom actually sells two versions of the Nightsky: the RX15 (equipped with an Intel CPU) and the ARX15 (based on the AMD Ryzen 9 processor). Because we received an ARX15, it meant that we would be testing our first AMD Ryzen-based mobile system.

The Eurocom Nightsky ARX15 is designed to be a very high-performance mobile system. To achieve this, the computer uses some components originally designed for desktop rather than laptop systems. Their higher power consumption requires significant additional cooling, which results in higher fan noise. Eurocom has recently updated the BIOS to address this.

Users can control fan speed. Slowing the fan to reduce noise will reduce performance while also improving battery life. But the battery in this system is meant more as a UPS than as a way to power the system for long periods of time.

As for the system being unable to complete some tests, several of the benchmarks used by DE can only be run on systems equipped with NVIDIA Quadro graphics boards, so the Nightsky ARX15 is unable to run those tests, but is otherwise compatible with most software. Lastly, we included two 4TB M.2 drives to demonstrate that Eurocom is unique in being able to include up to 16TB of solid-state storage in our mobile systems. We are also working with vendors to enable future mobile systems to include 128GB of system memory.

(Editor’s response: The benchmarks used by DE do not require NVIDIA Quadro graphics boards and can typically be run on systems equipped with other GPUs.)

With an advertised starting price of $1,999, we hoped that the Nightsky ARX15 would be one of the more affordable Ryzen-based systems, but that starting price proved a bit misleading.

The base configuration includes an AMD Ryzen 7 3700X 8-core 3.6GHz CPU, 16GB of 2666Mhz memory, an NVIDIA GeForce RTX 2070 graphics board and a 1TB SATA3 hard drive. The $1,999 price tag does not include an operating system and comes with only a one-year warranty.

The Eurocom Nightsky ARX15 supports up to 64GB of RAM and up to 24TB of storage with two M.2 drives plus a mechanical drive. The system we received included multiple upgrades that drove the total cost into the stratosphere.

You can choose among 15 different keyboard backlight colors, and the standard is a U.S. English language keyboard. Keyboards for other languages including U.K. English, French, German and Spanish cost $83 more. The keyboard had a decent feel but was marred by a frustrating layout. For example, the small left-shift key caused us to frequently press the adjacent backslash key instead.

A 4.25x2.5-in. gesture-enabled touchpad with a pair of buttons and fingerprint reader are centered below the spacebar. Centered above the display is a 1-megapixel webcam and microphone array. There are also a pair of speakers for the integrated SoundBlaster audio.

A small power button is located in the upper-right corner above the numeric keypad and illuminates when the system is powered up, but none of the other keys have LEDs. Instead, an indicator appears briefly on screen when you enable caps lock and number lock.

The right side of the case provides a single USB 2.0 port, a 2-in-1 audio jack (headphone and microphone) as well as a separate microphone-in jack, and a large exhaust air vent. The left side houses a security lock slot, an RJ-45 network connector, two USB 3.2 Gen 2 Type-A ports and a MicroSD card reader. The rear panel includes a USB 3.2 Type-C port that also supports DisplayPort 1.4, an HDMI port, a mini DisplayPort, a power connector and two large air intake vents.

There are also more air vents on the bottom of the case as well as a removable panel to access the internal battery. The entire bottom panel also can be removed to access the hard drive, memory and other internal devices, but a big red warning in the manual cautions that doing so may violate the warranty terms. Four LEDs along the front edge of the system indicate power, battery status, Wi-Fi and hard drive activity.

Although the base unit comes with 16GB of memory using a single small-outline dual-inline memory module (SODIMM), the Nightsky ARX15 can accommodate up to 64GB of RAM, using two 32GB SODIMMs. Again, Eurocom offers an array of memory configurations. Our evaluation unit came with 64GB of memory, using two Micron/Crucial DDR4-3200MHz SODIMMs, which added $1,292.

Though our system included the base configuration NVIDIA GeForce RTX 2070 discrete graphics card, you can actually downgrade to a GeForce RTX 2060 to save $194. The RTX 2070, based on NVIDIA’s Turing architecture, includes 8GB of GDDR6 memory and 2560 compute unified device architecture cores. Its 256-bit interface delivers a bandwidth of 448 GB/seconds, but the board consumes 215 watts. This graphics processing unit (GPU) powers a 15.6-in. 144Hz 1920x1080 in-plane switching (IPS) panel capable of displaying 98% of the sRGB gamut and is the only panel offered.

As previously mentioned, the base configuration includes a 1TB SATA drive, but as we have come to expect from Eurocom, that is just the starting point. Though mechanical drives of up to 8TB are available, our system eliminated the mechanical drive entirely (saving $89) and instead contained a pair of solid-state drives (SSDs).

Eurocom offers nine different M.2 SSDs, ranging from a 250GB Samsung drive to an 8TB SSD, and the Nightsky ARX15 supports RAID 0 or 1 on systems equipped with two identical drives. For our evaluation unit, Eurocom went over the top, including two 4TB Sabrent Rocket M.2 non-volatile memory express drives. At $2,083 each, they added $4,166 to the total cost, but the expense hardly seems justified.

Our system included the Intel AX200 wireless LAN module with 802.11AX and Bluetooth that comes standard, although you can upgrade or downgrade this option.

With so many power-hungry components, the removable 6-cell 62Whr lithium ion battery can only be considered to be a uninterruptible power supply (UPS), and powered the system for less than 55 minutes before shutting down, which makes it the worst battery life of any laptop we have ever tested.

Although the system remained relatively cool, reaching a peak of only 109°F, the Eurocom Nightsky ARX15 was exceptionally loud, hitting a peak of 70dB under heavy compute loads (equivalent to a vacuum cleaner), and averaged a very noticeable 55dB even at idle.

The situation became more troubling when we tried to run the SPECapc SolidWorks test. Because the NVIDIA GeForce RTX 2070 graphics card does not support the SolidWorks RealView feature, which is an integral part of this test, we could not even run this benchmark. We experienced this same issue when we tested the Lenovo ThinkPad X1 Extreme G1 (DE, July/August 2020). 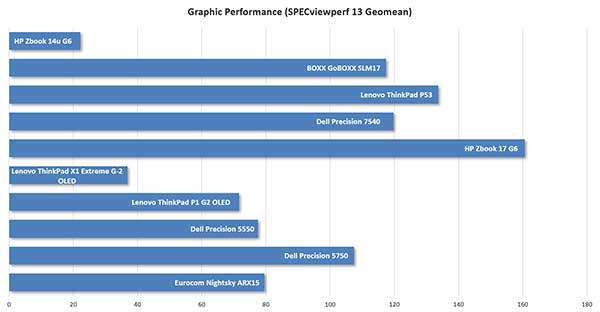 Graphic performance of recent mobile workstations, based on the SPECviewperf 13 geomean results.

On our AutoCAD rendering test, the 27.1-seconds average time was nearly 8 seconds faster than the fastest mobile workstation we have ever tested, a truly amazing result. And on the latest versions of the very demanding SPECwpc workstation performance benchmark, the Eurocom Nightsky ARX15 turned in the best results we have ever recorded on six of the seven use cases.

But the one it did not win, Product Development, is the one of most interest to DE [JL1] readers, and on this test, it finished behind eight of the 10 mobile workstations we have most recently tested. We base our price/performance chart on the older SPECwpc v2.0 test, and on this benchmark, the Eurocom Nightsky ARX15 turned in top marks on the Product Development portion of the test. 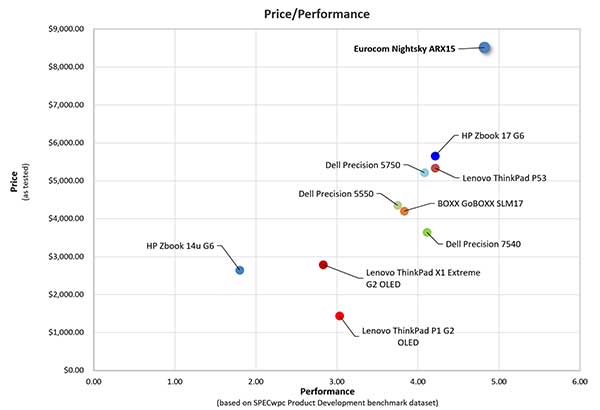 Though its high-end Ryzen processor and 64GB of RAM doubled the system cost, that would still have only brought the price to $4,000. The inclusion of not one, but two, 4TB SSDs more than doubled that.

As equipped, including the Windows 10 Professional 64-bit operating system that came preinstalled, our Eurocom Nightsky ARX15 would cost $8,512, making it the most expensive mobile system we have ever tested. Even substituting a single 1TB M.2 drive for the pair of 4TB drives would still only reduce its cost to $5,263. Since the base price only included a one-year return-to-factory depot warranty, our as-tested price also adds $313 for a three-year warranty.

Although there are certainly some users who would spend that much to obtain an extremely fast mobile system, in the case of the Eurocom Nightsky ARX15, we simply cannot justify its purchase. We have recommended systems before that lacked independent software vendor (ISV)  certification, but the Nightsky ARX15 can only be seen as a high-end gaming laptop, not a mobile workstation. The Eurocom Nightsky ARX15 may be fast, but it is also loud, suffers from absolutely terrible battery life, has an awkward keyboard and may not be compatible with some software typically used by our readers.