Exhibition is called The Beautiful Collection: Prince’s Custom Shoes and includes a piano, guitars and a 9-foot-tall pointillist image of Prince with over 347,000 3D-printed cells.

Exhibition is called The Beautiful Collection: Prince’s Custom Shoes and includes a piano, guitars and a 9-foot-tall pointillist image of Prince with over 347,000 3D-printed cells.

The Beautiful Collection highlights approximately 300 pairs of shoes worn by Prince throughout his career. The Paisley Park team has displayed the shoes in a way that highlights Prince’s impact on fashion, performance and popular culture. 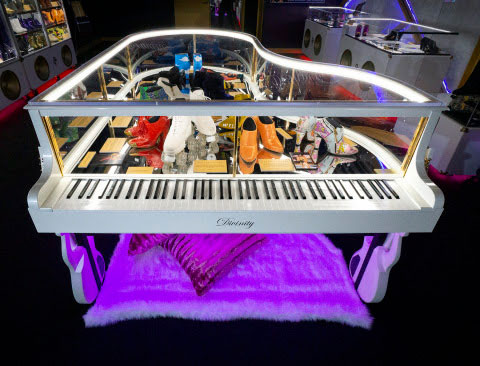 Placed in the center of the exhibit and built to display 11 pairs of shoes, is a baby grand piano printed using both fused deposition modeling and PolyJet 3D printing technologies. The piano isa 3D-printed baby grand piano and is composed of 45 individual parts fused together to create the final piece. All structural parts were printed in Nylon12 Carbon Fiber and non-load-bearing covers were printed in ASA Black material. Stratasys used the company’s Stratasys F900 3D printer and Stratasys Fortus 450 3D printer to print the structural parts. The keys of the piano were printed using PolyJet technology on the Stratasys J850 3D printer using VeroUltra White and VeroUltra Black materials—no paint was necessary to finish the keys.

When designing the exhibit, Duff Eisenschenk, Designer for Paisley Park, wanted to ensure that iconic Prince elements were included in the exhibit. To highlight one such item, Eisenschenk designed the legs of the baby grand piano to be replica Cloud Guitars, one of Prince’s most iconic guitar shapes. Stratasys first took over 250 3D scans of Prince’s Cloud Guitar and processed the scans into 3D print-ready design files.

The Stratasys design team spent over 60 hours from first scan to final files ensuring that each element of the guitar could be replicated through 3D printing. The guitars were printed on the Stratasys F900 3D printer using Nylon 12 Carbon Fiber, and the size of the F900 printer allowed the guitars to be printed in one piece, with each guitar taking over 60 hours to print.

No detail was spared when finalizing the guitars; each piece included an exact replica “cloud” label printed using VeroVivid materials on the Stratasys J850. The guitars were painted and fit with actual guitar tuning nuts, bridges and strings—making them visually appealing and playable.

“When creating new exhibits at Paisley Park it’s important to include innovative elements that will not only surprise our guests, but also leave them inspired,” says Mitch Maguire, managing director for Paisley Park. “We are thrilled that we were able to partner with a Minnesota-based company to create special and unique pieces that enhance this exhibit.”

In addition to the baby grand piano with replica cloud guitar shoe showcase, Stratasys also created the largest 3D printed polymer image on fabric of Prince. The 9-foot by 9-foot image is composed of 347,130 clear spherical cells with layers of color contained inside. The ability to replicate the photograph on canvas with such accuracy was due to the Stratasys J850 3D printer, which can print more than 640,000 combinations of color, textures, gradients and transparencies—down to the micron level. The finished canvas was printed in 56 sections on 100% white cotton denim and hand sewn together.

Stratasys’ direct-to-textile 3D printing was first demonstrated by designers at New York Fashion Week in 2019. The canvas features an image of Prince taken by Jeff Katz in 1992.

“The level of 3D printing innovation on display at Paisley Park is incredible,” says Pat Carey, senior vice president of Strategic Growth for Stratasys. “In everything we created for this exhibit we pushed the boundaries of our technology. In addition to being able to showcase and complement Prince’s shoes through the creation of these amazing 3D printed pieces, we can also highlight how 3D printing can be utilized beyond its typical use cases.”

The Beautiful Collection: Prince’s Custom Shoes was designed by Paisley Park’s Duff Eisenschenk and curated by the Paisley Park Museum Collections team. The exhibit is part of all tours and is set to be open through 2022.

Paisley Park, Prince’s private estate and production compound in Chanhassen is open for public tours, giving fans of the music icon the opportunity to tour the 65,000-square-foot complex that served as the center of Prince’s creative universe. Guided tours take visitors throughout the creative spaces of Paisley Park, including recording and mixing studios where Prince recorded, produced and mixed most of his biggest hits; exhibit spaces that chronicle films such as Purple Rain and Graffiti Bridge; Prince’s private NPG Music Club; and a soundstage and concert hall where Prince rehearsed for concert tours and held private events and concerts. The tour also features artifacts from Prince’s personal archives, including iconic concert wardrobe, awards, musical instruments and concert memorabilia.