Bluetest, a pioneer in wireless test solutions, designs reverberation systems used to measure the performance of wireless devices and wideband antennas. They use RF simulation to streamline their development cycle of design, fabrication, testing, and validation — enhancing high-speed wireless communication in the process. 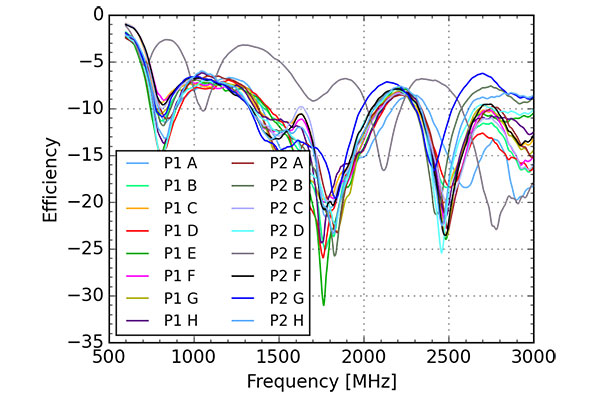 Every year, consumers are dazzled by the latest smartphones and wireless devices that hit the market. Before these upgraded gadgets reach the shelves, there is an extensive design and testing process that goes into developing them.

Antennas, a paramount component of wireless devices, are consistently updated in order to keep up with advancing technology, such as 5G and the internet of things (IoT). They are expected to have greater bandwidth, meet safety regulations, and be small enough to fit into microdesigns.

To help engineers working with wireless equipment, Bluetest, a company based in Gothenburg, Sweden, has developed easy-to-use reverberation test systems (RTS) that measure the performance of wireless devices and antennas.

From Startup to Worldwide Powerhouse in Wireless Test Solutions

Since the early 1940s, antenna performance has been tested in anechoic chambers, microwave-absorbing rooms. In this type of chamber, an antenna is rotated, and its radiated intensity is measured in different directions. The data gained from this testing method is relatively easy to interpret, but anechoic chambers tend to be expensive, and their large size makes them unwieldy.

You can generate very high field intensities inside this kind of chamber, which is a great feature for testing immunity and how sensitive a device is when it gets radiated with high-power electromagnetic fields.

In the late 1990s, people learned that reverberation chambers can also be used to test certain antenna parameters. For example, a small antenna's most important property is its efficiency, or the quotient between the power you put into the antenna compared to how much power is actually radiated (typically measured in dB).

What was realized is that you can measure antenna efficiency in reverberation chambers, and it turned out that for a small antenna, you can do it very fast and accurately. 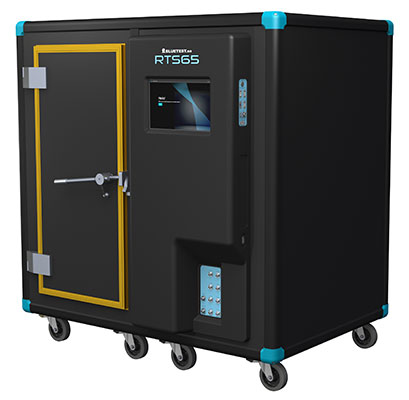 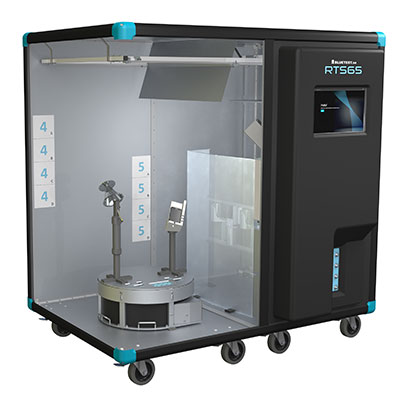 Figure 1. An example of one of Bluetest's reverberation test systems, known as the RTS65. Bluetest currently has five different RTS on the market.

Toward the beginning of the reverberation testing system's popularity, Per-Simon Kildal, a professor of antenna systems at Chalmers University of Technology in Sweden, started a research project on reverberation chambers and their ability to analyze antennas. After studying these chambers, Kildal was inspired to start a company based on his findings — as a result, Bluetest was born.

For several years, Bluetest was a small research startup, but in 2010, the company grew significantly. Around this time, 4G, or the fourth generation of mobile systems (also known as LTE), was introduced, along with MIMO. As a result, said Rehammar, “A lot of very complicated questions popped up, like: 'How are we going to test the performance of these systems?'”

Toward the beginning of the reverberation testing system's popularity, Per-Simon Kildal, a professor of antenna systems at Chalmers University of Technology in Sweden, started a research project on reverberation chambers and their ability to analyze antennas. After studying these chambers, Kildal was inspired to start a company based on his findings — as a result, Bluetest was born.

For several years, Bluetest was a small research startup, but in 2010, the company grew significantly. Around this time, 4G, or the fourth generation of mobile systems (also known as LTE), was introduced, along with MIMO. As a result, said Rehammar, “A lot of very complicated questions popped up, like: 'How are we going to test the performance of these systems?'”

Bluetest's reverberation systems (Figure 1) perform passive and active tests to determine whether or not a device is optimized. Passive tests predominantly measure antenna efficiency, while active tests measure the total radiated power and total isotropic sensitivity in the device under test's (DUT) transmitter and receiver, respectively.

During active tests, the transmitter and receiver in the DUT are powered on. Active measurements help give an overview of how the DUT performs as a whole. Both tests help ensure that the device, such as a mobile phone, meets regulations and customer requirements.

All of Bluetest's reverberation test systems and products are designed and produced at their main office in Gothenburg. The RTS contains a wide variety of components, such as walls made of reflective material, a reference antenna, four to sixteen measurement antennas with different polarizations, mode stirrers, RF interfaces, and more.

When the production process is complete, the system is packaged in a large wooden cradle and sent to customers around the world.

“One of the neat things about the reverberation test systems is that, despite that they are quite large when compared to a computer or a measurement instrument, for an over-the-air test system, they are very small,” said Rehammar.

Bluetest is in the process of designing new technology to use in their reverberation test systems for millimeter-wave (mmWave) applications, including the 5G mmWave band, where the center frequency is an order of magnitude higher than that of conventional microwave applications. High-speed communication relies on a wide bandwidth, which is provided by a high carrier frequency.

One of the most popular antenna designs for wideband applications is the Vivaldi antenna — a tapered slot antenna.

When it comes to antennas, we need to be able to test anything from the low cellular bands around 650 MHz up to over 40 GHz.

The wavelength in millimeter-wave device designs is much smaller than the microwave wavelength, and any minor physical distortion due to thermal-structural effects or fabrication tolerance error would undesirably impact its performance. Therefore, it is critical to validate the performance of such devices using simulation. Bluetest used the COMSOL Multiphysics® software and add-on RF Module to optimize their antenna and circuit designs, including the Vivaldi antenna. 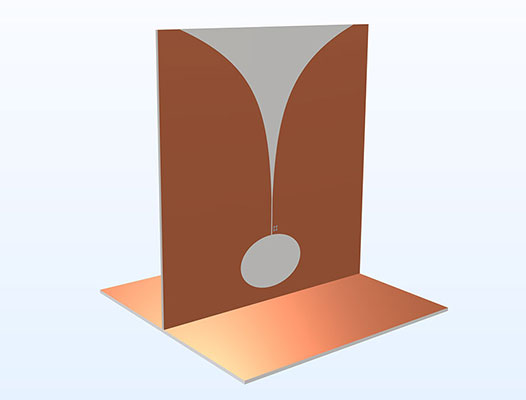 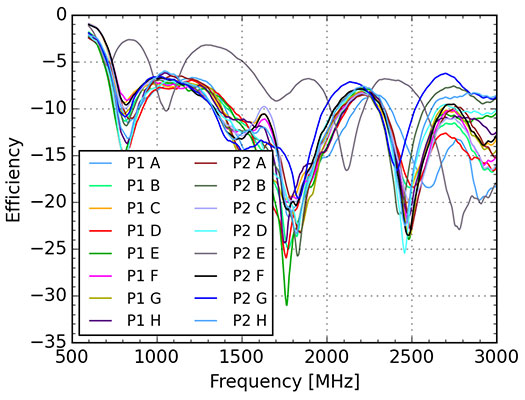 The first prototype of the Vivaldi antenna design was modeled in FR4 substrate (a composite material made up of woven fiber glass and epoxy resin) with a thickness of 1.6 mm. Simulating the first iteration of this antenna allowed Rehammar and his team to see that there were a few issues relating to its mounting, size, stability, and efficiency while operating at low frequencies. Thanks to these findings, they were able to simulate an improved Vivaldi antenna by implementing Bézier curves into their model (Figure 2). 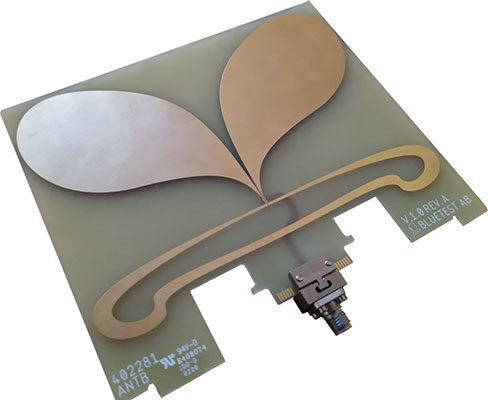 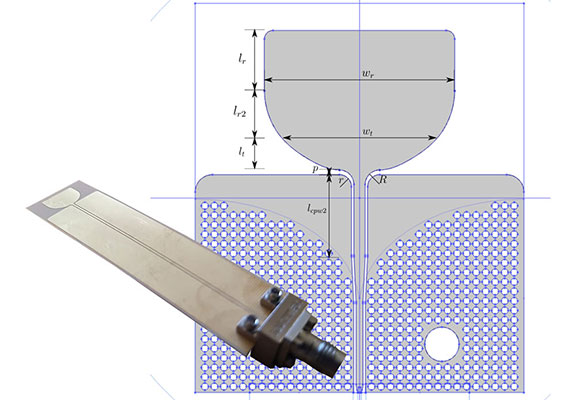 Bluetest also simulated, designed, and tested the efficiency of a wideband monopole antenna for ultrawideband operating from 6 GHz to 67 GHz. This type of antenna is used in their reverberation test systems for 5G measurements; it also helps provide the system with more versatility because it can be used during a measurement without switching the standard test antenna.

The usage of simulation is not limited to antenna designs. To enhance the performance of the reverberation chamber, Bluetest not only investigated the resonance eigenmodes of a customized cavity, but also developed circuit-to-waveguide transitions using the RF Module.

Keeping Up with the Advancement of Technology

At Bluetest, Rehammar believes that simulation technology and measurement technology complement each other completely.

At the beginning stages of building a design, you need simulation, and to confirm your physical device is working properly, you have to do measurements.

Bluetest's systems are consistently being updated to keep up with the advancement of wireless technology, especially within the mobile phone development industry.

Before 5G, mobile systems operated up to about 2.6 GHz, and now you have 5G systems that can run up to 40 GHz.

To stay on track with this advancing field, Bluetest has been working on supporting as many frequency bands as possible. With the help of simulation, Bluetest can focus on improving their RTS test time and measurement accuracy, while keeping the testing complexity at a high level.

As for the future of wireless technology, Rehammar hopes that Bluetest can play a role in helping provide internet access to parts of the world that are missing it. Says Rehammar: “There are billions of people in the world who still do not have stable internet access, and that is something I really hope we can contribute to change within the next ten years.”