GPU acceleration is often associated with photo-realistic renderings and real-time graphics, but the latest developments in the industry point to a rapid expansion of the applications.

CFD (Computational Fluid Dynamics) analysis is generally associated with airflow and heat flow in confined spaces, but not with material flow, such as the loading and dispensing of rocks and sand in construction. This is the focus of engineering software maker Altair’s EDEM. A variation of Finite Element Method, the application is dubbed Discrete Element Method (DEM) by the company. It’s shown to benefit from GPU acceleration.

The latest version of EDEM shows significant improvements thanks to GPU acceleration. The polyhedral particle solver runs on NVIDIA CUDA GPU cards. It is compatible with the EDEM API and the coupling interface for coupled simulations with CFD and Multi-Body Dynamics solvers. The EDEM multi-sphere GPU solver has been optimized, providing a speed improvement of up to 30%, according to the company. (The graph below shows GPU speed-up between EDEM 2021 and previous versions.) 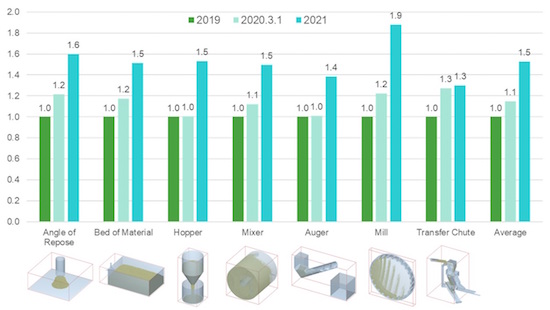 Similarly, in video games’ virtual worlds as well as real-life architecture, NVIDIA VRWorks-Audio is elevating audio simulation’s potential, accurately reproducing what you would hear as though the mesh-constructed castles and mansions were real structures. This too is another area where the GPU can make a difference.

Altair acquired EDEM in November 2019, allowing it to augment its machinery and materials simulation packages with EDEM. In mining, heavy equipment, and pharmaceutical operations, EDEM can be used to analyze and optimize the flow of rock, sand, asphalt, and pills, among others. EDEM’s particle behavior simulation system benefits from GPU acceleration.

In announcing updates to EDEM 2021, the company revealed, “The polyhedral particle solver has been designed for high performance cards and runs on Nvidia CUDA GPU cards. It is compatible with the EDEM API and the coupling interface for coupled simulations with Computational Fluid Dynamics (CFD) and Multi-Body Dynamics solvers.”

Rocky DEM from ESSS also leverages GPU acceleration for particle simulation. Last year, the company announced that Oracle Cloud had made NVIDIA's A100 Tensor Core GPUs available on its infrastructure so that Rocky DEM users could accelerate solving more complex and larger problems in the particle dynamics space. In benchmarking, using GPU 4.8 machines with NVIDIA A100 GPUs provided a 40% performance improvement versus running on a single GPU. Processing multi-GPUs simulations in this configuration showed significant improvement. 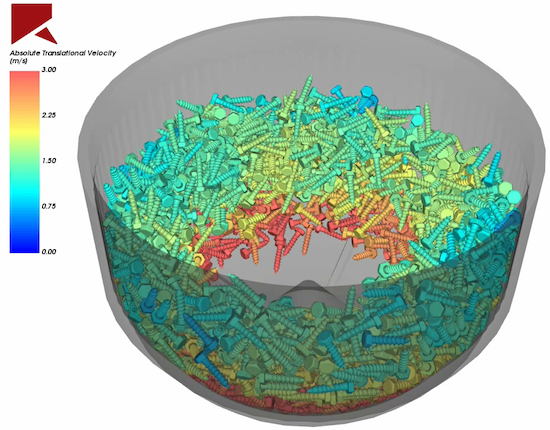 “This higher communication bandwidth between all GPUs, which results in lower latency, has proven to be key in achieving better scalability as more GPUs are added. The benefit to Rocky DEM users is the critical performance gains that result from combined processors available in each of the NVIDIA GPUs — as well as from stacking the memory from multiple GPUs to run cases that do not fit into a single GPU,” said Clovis Maliska Jr., President of ESSS.

Rocky DEM is also integrated with applications within the Ansys Workbench platform. This enables simulations such as a wide range of granular-fluid systems using Rocky DEM and Ansys Fluent. The coupling between the DEM tool and Ansys Mechanical can allow engineers to predict the stress responses of structures when subjected to granular loads that have been accurately calculated in Rocky DEM.

You cannot not see how sound travels, but you can certainly hear it. Certain seats in a concert hall may suffer from poor reception; certain corners in a car may be beyond the reach of the speakers.

With VRWorks-Audio from NVIDIA, acoustic engineers can hear audio in a virtual environment, as though the walls, domes, and basements constructed with pixels have physical properties. This helps the engineers pinpoint areas with too much echoes or reverberation, and finetune the audio experience of a space.

Much like ray-traced rendering, VRWorks-Audio simulates audio effects by tracing the sound’s path from the audio source, calculating its trajectories as it comes in contact with the nearby objects.

“Leveraging NVIDIA OptiX ray tracing technology, VRWorks Audio traces the path of sound in real-time, delivering physically realistic audio that conveys the size, shape, and material properties of the virtual environment you are in,” the company explains.

“Concurrently, GE Aviation and Altair will continue developing Flow Simulator together, with even more advanced simulation technologies and design tools that will continue to expand its capabilities for a broader base of users,” said Arjan Hegeman, senior executive, Technology, GE Aviation.

Altair’s existing offerings to the aerospace industry include OptiStruct, for structural analysis; MotionSolve for multibody mechanical system analysis; and AccuSolve, for CFD. Before the acquisition of GE Flow Simulation, Altair was reselling the software under its Altair Partner Alliance program.

“Flow Simulator is an integrated flow, heat transfer, and combustion design software, which enables mixed fidelity simulations,” according to the announcement. In simpler terms, the software lets you simulate the behaviors of aircraft engines during the flight cycle, from runway and takeoff to flight and landing.

In addition to aerospace, GE Flow Simulation has also been used for complex thermal systems simulations in healthcare, locomotives, and renewable energy sectors.

With ramped up vaccine activities in the fight against COVID, the demand for simulation in life science is expected to grow. Anticipating the need, workstation vendors have targeted the molecular dynamics space with workstations, HPC clusters, and multiuser servers that can run these large-scale simulations.