The ThinkPad family of mobile workstations. Image courtesy of Lenovo.

Among the new systems, the ThinkPad P53 is a powerful 15-in. mobile workstation, offering the power of the NVIDIA Quadro RTX 5000 GPU with RT and Tensor cores—offering real-time ray tracing and AI acceleration.

Among the new systems, the ThinkPad P53 is a powerful 15-in. mobile workstation, offering the power of the NVIDIA Quadro RTX 5000 GPU with RT and Tensor cores—offering real-time ray tracing and AI acceleration.

At NXT BLD in London, Lenovo is launching the next generation of its ThinkPad P Series with the release of five new ThinkPads, including the ThinkPad P73, ThinkPad P53, ThinkPad P1 Gen 2, and ThinkPad P53s and P43s.

The ThinkPad P53 is a powerful 15-in. mobile workstation, offering the power of the NVIDIA Quadro RTX 5000 GPU with RT and Tensor cores—offering real-time ray tracing and AI acceleration. With its framework and design, the ThinkPad P53 serves as the multitool of workstations suited for a versatile mobile option. It allows users to access workflows previously reserved for those willing to carry a 17-in. mobile workstation. The addition of the fastest Intel Xeon and 9th Gen Core class CPUs with up to eight cores, including the Core i9, up to 128GB of memory and 6TB of storage gives a powerful product now all in the portability of a 15-in. chassis. 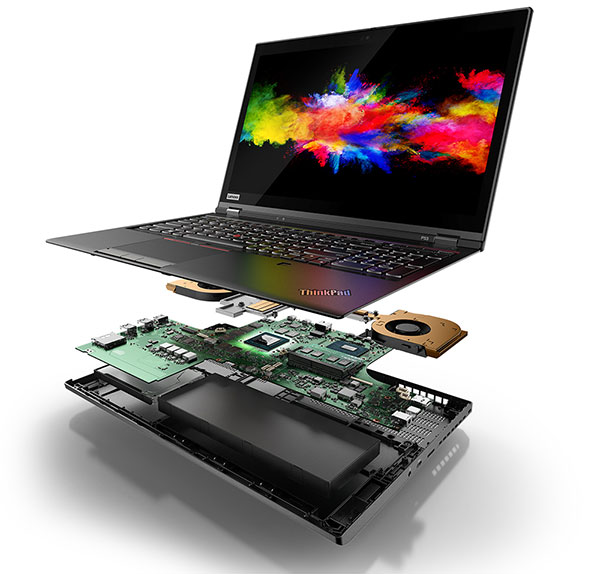 The ThinkPad P53 is a 15-in. mobile workstation that offers up to the power of the NVIDIA Quadro RTX 5000 GPU with RT and Tensor cores that improve real-time ray tracing and AI acceleration. Image courtesy of Lenovo.

This mobile workstation also boasts a new OLED Touch display with Dolby Vision HDR for color and beep black levels. Lenovo is maximizing the portability of this workstation with a new 35% smaller power supply. The ThinkPad P53 offers professional components and breakthrough technology and features, equipped to handle everything from augmented reality and VR content creation to the deployment of mobile AI or demanding ISV workflows. The ThinkPad P53 will be available in July, starting at $1,799.

Now with a carbon fiber finish offered on a 4K UHD panel, the ThinkPad P1 is a workstation solution for professionals, across industries, running CAD applications to providing optimal storage for data-caching and real-time playback. The ThinkPad P1 Gen 2 will be available at the end of June, starting at $1,949.

Lenovo is also launching the bigger ThinkPad P73. This 17-in. workhorse offers maximum workspace with its 17.3-in. Dolby Vision 4K UHD screen and mobility with a 35% smaller power adaptor. Like the ThinkPad P53, this 17-in. chassis is packed with the latest Intel Xeon and Core processors and powerful NVIDIA Quadro RTX graphics. The ThinkPad P73 will be available in August, starting at $1,849. 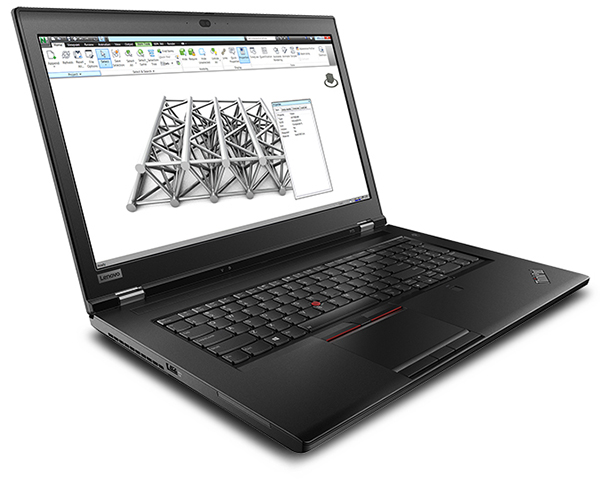 The ThinkPad P73 is a 17-in. workhorse with a Dolby Vision 4K UHD screen equipped with the latest Intel Xeon and Core processors, as well as NVIDIA Quadro RTX graphics. Image courtesy of Lenovo.

For the first time, Lenovo is adding new X-Rite Pantone Factory Color Calibration to the ThinkPad P1 Gen 2, ThinkPad P53 and ThinkPad P73, ideal for those working in video content creation, oil and gas and other industries that require tprecise colors for the workflow. The factory color calibration profile is stored in the cloud to ensure accurate recalibration. This profile allows for dynamic switching between color spaces including sRGB, Adobe RGB and DCI-P3.

The entire ThinkPad portfolio is also equipped with advanced ThinkShield security features—from ThinkShutter to privacy screens to self-healing BIOS that recover when attacked or corrupted .

Making the Case for the Right Workstation
Whether it's an engineer designing bridge structures on a major infrastructure project or a developer coding the next big video game release, the workstation is the epicenter of the workday and a barometer for employee productivity.
COVID-19 Impact on AR/VR a Mixed Bag: Interview with Lenovo
Lenovo Commercial ARVR Lead Discusses Coronarivus Impact on Business, training and remote assistance emerges as solid deployment reasons
No One-Size-Fits-All Optimal System
Software use and workload should determine IT manager workstation selection.
Autodesk discusses partnership with ANSYS at AU 2019, offers free generative design tools, more
Autodesk and ANSYS affirm partnership, Autodesk offers free generative design tools, React Robotics design in Fusion with Lenovo workstations, more
Is AR/VR Ready to Go Beyond Visualization?
Storytelling is the dominant use of mixed reality devices at present, but may change in the future.
Mobile Workstations Continue to Rise
Demand is driven by the desire to have as much computing power as possible at hand 24/7.
Lenovo Company Profile