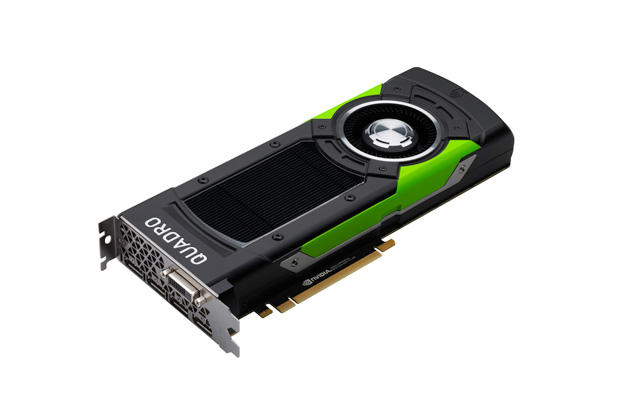 NVIDIA says it designed its new Quadro P6000 GPU “to power the most advanced workstations ever built.” Image courtesy of NVIDIA Corp.

The Quadro P6000 and Quadro P5000 GPUs are based on NVIDIA’s Pascal GPU architecture, meaning that they are designed for intensive visual computing applications such as CAD, CAM, engineering and scientific visualizations as well as virtual reality. The Pascal architecture, says the company, is its most powerful GPU architecture. NVIDIA says that Pascal has been purpose built “to be the engine of computers that learn, see and simulate our world.”

In addition to the Pascal architecture, shared features of the Quadro P6000 and Quadro P5000 include their PCI Express 3.0 x16 graphics bus and 4.4x10.5 in. (HxL) dual-slot form factor. They have four DisplayPort version 1.4 display connectors and a single DVI-D display connector.

The Quadro P6000 and Quadro P5000, as reported earlier by DE’s Kenneth Wong, are scheduled to become available in October 2016. The GPUs will be offered by NVIDIA partners HP, Dell, and Lenovo in their workstation product lines, according to Wong.

For further details on the NVIDIA Quadro P6000 and Quadro P5000, click here.

See why DE‘s editors selected NVIDIA Quadro P6000 and Quadro P5000 GPUs as their Pick of the Week.