Dassault Systemès is one of several clients Graebert supplies with CAD technology.

Graebert sees itself as the arms merchant for the war to liberate CAD from the desktop. It sells a three-part portfolio of DWG-based CAD software under the ARES brand name for desktop (Commander), mobile (Touch), and cloud (Kudo). It also develops CAD software for other vendors, and it offers extended features to simplify enterprise deployment. 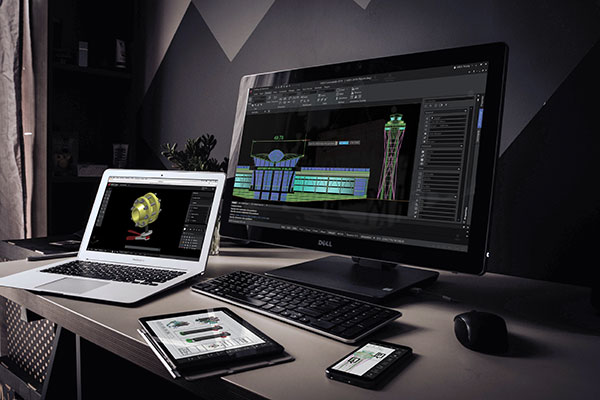 The cloud-aware DWG-based CAD technology in the Graebert ARES line is also used in products from Dassault Systemès, Corel Software, and others. Image courtesy of Graebert GmbH.

Dassault Systemès is a global leader in 3D modeling CAD technology, yet the Dassault product with the most seats worldwide is a 2D, DWG-based drafting product, DraftSight. While the dimensional irony is not lost on the company, they say it's all part of the larger picture.

“2D and 3D are inherently connected,” says Andreas Kulik, Dassault Systemès executive responsible for the DraftSight product line. “It is not 2D to 3D, it is synergy of applications for the right job at the right time in the design environment.” Kulik spoke about DraftSight and its place in the Dassault Systemès 3DEXPERIENCE platform at the Graebert Annual Meeting in Berlin last week. Graebert GmbH develops the fundamental CAD technology that Dassault uses to create DraftSight.

Dassault and Graebert both say the market for DWG-based CAD is very much alive and well in manufacturing and product development. It will formally announce a new version of DraftSight in February — at SolidWorks World — which extends the product with new features for interoperability and extended workflow development.

There will be new tools for transforming images and vector content into drawings as well as the ability to quickly transform 2D views into 3D parts and then convert them to the SolidWorks data format. Kulik says the next DraftSight will stress interoperability “in the context of moving design data from one tool to another without friction and without effort.”

“There are perhaps 10 million users of DWG worldwide. We believe the market can grow five to ten times larger.”

There is no existing DWG-based CAD product that can internally convert drawings into SolidWorks data. The availability of such interoperability will likely become a key differentiator in Dassault’s DraftSight marketing going forward.

Dassault also intends to use Graebert’s Kudo Cloud CAD technology in the next release of DraftSight, but is keeping the specifics for the February announcement. There will also be a DraftSight API that customers can use for customization, as well as a commercial network for DraftSight add-ons to be distributed in the 3D Experience Marketplace.

Dassault Systemès is one of several clients Graebert supplies with CAD technology.

CorelCAD, from the makers of the popular Corel DRAW, is primarily aimed at technical illustrators who need to turn designs into illustrations for tech manuals and marketing content.

Graebert also sells its software under the ARES brand name as a “Trinity” platform of desktop, mobile, and cloud products. It also sells a DWG-based mechanical design product in India and a construction-oriented CAD product in Japan.

Graebert has Founding Member status with the Open Design Alliance, which develops the DWG technology used by more than 1,000 companies.

Graebert Wants to Liberate CAD from the Desktop

Despite a vast distributed computing infrastructure of notebooks, tablets and smartphones in the workplace, Graebert claims CAD is mostly still bound to the desktop. “It is a ‘Winter is Coming’ strategy,” says Graebert marketing executive Cedric Desbordes. CAD vendors want more customers, but they keep insisting CAD is an experts-only, desktop solution, limiting growth by downplaying or ignoring the existence of a larger market.

Graebert sees itself as the arms merchant for the war to liberate CAD from the desktop. It sells a three-part portfolio of DWG-based CAD software under the ARES brand name for desktop (Commander), mobile (Touch), and cloud (Kudo). It also develops CAD software for other vendors, and it offers extended features to simplify enterprise deployment.

“We must help companies realize good alternatives exist to extend access to drawings throughout the organization, available not only for viewing but for editing and reuse,” says Wilfried Graebert, company CEO and founder. “Drafting is a utility like word processing,” he adds.“There are traditional CAD users and there is the larger audience for the information. The larger audience now wants access to the drawings on their mobile devices.”

Graebert says it sees the market as wide open for growth once potential users realize CAD can be a utility for daily professional use. The key is CAD software designed for occasional use running on mobile devices or accessible from the cloud. “We find there are three to five mobile users ready [for CAD] for every existing desktop user,” says Desbordes. “There are perhaps 10 million users of DWG worldwide. We believe the market can grow five to ten times larger.”

He cites one corporate customer who has 1,000 CAD desktop users but found an additional 7,000 who need either regular or occasional access to drawings. “Cloud and mobile are not cannibalizing desktop users,” Desbordes says, “they are companions.”

A short live demonstration at the Graebert Annual Meeting made the point. A drawing created on ARES Commander, the desktop CAD product, was saved to a Dropbox cloud storage account. (Graebert supports several cloud storage services.) The drawing was then opened on a tablet using ARES Touch, the mobile CAD program that runs in both iOS and Android. The user added a photo to the drawing as annotation, then changed a triple window into a single. The changes were automatically updated by the ARES Kudo cloud technology that manages interaction between the three products. The DWG file was synchronized and updated as it moved from one platform to the next.

Other product news from the Graebert Annual Meeting:

Replacing Windows
Graebert, Act II: Enterprise CAD Collaboration
Remaining Productive During Lockdown
Graebert to CAD Vendors: We Can Take You to the Cloud
Clouds Without Silos are the New Frontier for the Open Design Alliance
Graebert Company Profile