HP makes their lightweight mobile workstation even thinner and smaller than previous versions.

HP makes their lightweight mobile workstation even thinner and smaller than previous versions. 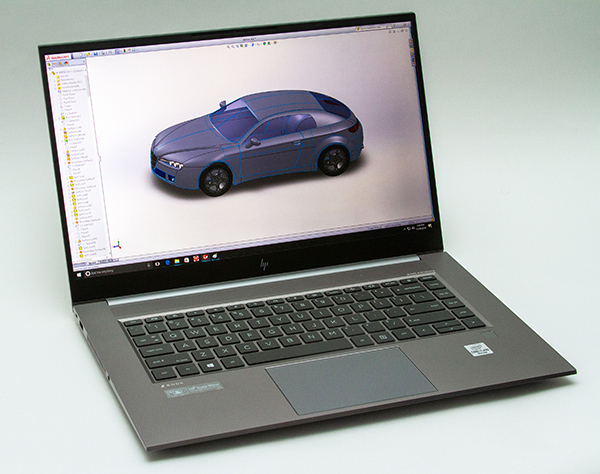 The HP ZBook Studio mobile workstation has been a favorite since its introduction. Earlier this year, HP revamped its entire ZBook portfolio, and we jumped at the opportunity to review the latest version of what the company claims is the “world’s most powerful mobile workstation of its size.”

Now in its seventh generation, the redesigned HP ZBook Studio G7 is thinner, smaller, lighter and more powerful than its predecessor, and features an improved thermal design, faster performance and increased battery life.

Based on a 10th-generation Intel processor, the HP ZBook Studio G7 comes housed in a satin-finished, aluminum unibody chassis with a polished Z-logo etched into the lid and triangular rubber strips across the bottom. These strips keep the system from sliding around on your desk and raise it slightly to aid airflow.

Raising the lid reveals a spill-resistant 85-key backlit keyboard with 1.3-mm of travel, a bit shallow for some touch-typists. Most keys are full size, with the exception of a row of half-height function keys above the number row and small arrow keys in the lower right corner. There is no separate numeric keypad.

A fingerprint reader (a $12 option) is positioned to the lower right of the keyboard. A pair of speakers connected to a Bang & Olufsen sound system flank the keyboard, while the responsive 3.5x2.75-in. touchpad is centered below the spacebar. The touchpad lacks dedicated buttons, but it does support gestures for zooming and scrolling. You can also tap near the touchpad’s lower-right corner to right-click.

Function keys enable you to control screen brightness, adjust volume, toggle keyboard backlighting and mute the built-in microphone. You can also toggle HP Sure View, an integrated privacy screen that makes the display unreadable to those around you. Several keys have their own LEDs to indicate when they are selected. One of those small function keys is actually the power button, but you will seldom press it, because the computer automatically turns on when you lift the lid.

A 720p webcam is centered above the display, flanked by a pair of microphones and infrared cameras as well as an LED that glows white when the webcam is active. The 15.6-in. display appears larger, thanks to a much thinner bezel (73% thinner along the top and 52% thinner along the sides, compared to the ZBook Studio G5). Ports are at a bit of a premium in this new ZBook—it’s a trend we have seen in other recent thin mobile systems. Along the right side is an SD media reader slot, a mini-DisplayPort, a pair of USB-C Thunderbolt ports, a 4.5-mm power adapter port and an LED charging indicator light. Ports along the left side consist of a microphone/headphone combo jack, a single USB 3.1 port with charging capability and a security lock slot. 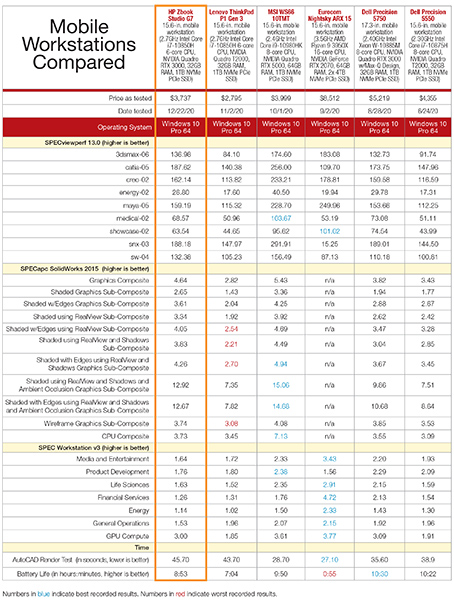 HP offers a choice of CPUs, including several six- and eight-core Intel i7 processors, as well as the 2.4GHz 8-core Intel Xeon W-10885M. There is also a choice of NVIDIA graphics boards, ranging from the Quadro T1000 to the RTX 5000.

Interestingly, rather than selecting a CPU, a graphics processing unit (GPU) and RAM, you must choose one of 14 configurations that combine a processor, graphics card and a select amount of memory (which is soldered to the motherboard).

The system we received included an Intel Core i7-10850H CPU, an NVIDIA RTX 3000 GPU and 32GB of 2666MHz RAM. That six-core Comet Lake CPU has a 2.70GHz base speed, with a maximum turbo speed of 5.1GHz and a 12MB Smart Cache as well as integrated Intel universal high-definition graphics, while attaining a thermal design power (TDP) rating of just 45 watts.

HP offers a choice of four displays. The base configuration includes a 1920x1080 LED anti-glare panel with a brightness of 400 nits. Our evaluation unit came with a much brighter (1000 nits) full high-definition panel that included HP Sure View technology, adding $169. Other choices include a 3840x2160 DreamColor display and a 3840x2160 OLED panel. 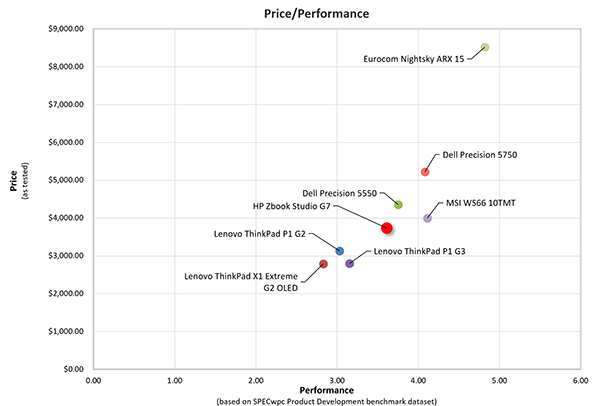 The new ZBook Studio G7 also supports just a single M.2 storage device. Choices range from the 256GB included in the base configuration to 2TB. Our system came with a 1TB PCIe NVMe TLC SSD, which added $365.

All ZBook Studio G7 systems include an Intel AX201 WiFi6 network adapter plus Bluetooth 5.0 and an HP Long Life 6-cell 83 Watt-Hour battery. That battery kept our system running for nearly 9 hours, more than 3.5 hours longer than its predecessor. The ZBook Studio G7 remained cool and nearly silent throughout our tests, thanks to new venting and cooling technologies, including a vapor chamber heat sink and advanced fan control methodologies.

Despite its light weight and diminutive size, the HP ZBook Studio G7 still delivers the kind of performance one would expect from a mobile workstation. On the SPECviewperf test, which focuses on graphics, the new ZBook Studio outperformed systems costing considerably more. The same proved true on the SPECapc for SolidWorks benchmark.

On the very demanding SPEC workstation benchmark, the ZBook Studio easily surpassed the results of the previous generation, with results on par with those of other thin, lightweight mobile workstations we have tested recently. Its 45.7-second average to complete our AutoCAD rendering was 2 seconds slower than the Lenovo ThinkPad P1 Gen 3, which was based on the identical CPU.

The HP ZBook Studio G7 is independent software vendor certified for a wide range of applications from Autodesk, Dassault Systèmes, PTC and Siemens. It has also passed military certification tests and other quality checks to ensure it can perform in extreme conditions. Although the standard warranty covers the system for just 1 year, our $3,737 price as tested includes $259 to extend coverage for three years.

After having tested several generations of this system, we remain impressed. The HP ZBook Studio G7 is one of the best thin, lightweight mobile workstations made today, offering a perfect combination of performance, portability and features.