The transaction is expected to enhance Fathom’s position in additive and traditional advanced manufacturing capabilities and accelerate Fathom’s investments in organic and inorganic growth opportunities.

The transaction is expected to enhance Fathom’s position in additive and traditional advanced manufacturing capabilities and accelerate Fathom’s investments in organic and inorganic growth opportunities.

The FATHOM team is driven by advanced technologies that enhance and accelerate today's product development and production processes—we're changing the way products are being designed and manufactured by helping...
FATHOM
Company Profile

Fathom Digital Manufacturing Corporation and Altimar Acquisition Corp. II, a special-purpose acquisition company sponsored by an affiliate of HPS Investment Partners, LLC, report that they have entered into a definitive business combination agreement pursuant to which Fathom and Altimar will combine, and after which Fathom will become a publicly traded company.

Upon completion of the transaction, the combined company expects to be listed on the New York Stock Exchange. Fathom is majority-owned by CORE Industrial Partners, a Chicago-based private equity firm focused exclusively on investing in North American manufacturing, industrial technology and services businesses.

Fathom is a cash-generating business with $149 million in pro forma revenue in fiscal year 2020. The proceeds from this transaction will strengthen Fathom’s ability to continue investing in organic and inorganic growth opportunities as the market for its key service areas expands. The company will be guided through this growth by a management team with decades of combined manufacturing experience, along with a diverse board including former executives at manufacturing companies such as General Electric, 3M, Ingersoll Rand and Chrysler.

“With Industry 4.0 taking off, we believe Fathom is on the cusp of a significant growth opportunity, and we’re thrilled to be combining with Altimar as we make our public market debut and move into our next chapter,” says Ryan Martin, CEO of Fathom. “With our strong business profile and solid balance sheet, we see an opportunity to continue scaling up our capabilities in both on-demand additive and advanced traditional manufacturing.”

“We evaluated a wide range of potential targets, but it became clear to us in our search that Fathom’s ideal blend of speed, scalability, breadth and financial strength positions it to become a leading player in the modern manufacturing market,” says Tom Wasserman, chairman and CEO of Altimar Acquisition Corp. II. “As more companies realize the benefits of on-demand manufacturing, we believe Fathom’s multi-year head start has resulted in a high barrier to entry that few peers can penetrate.”

“When we first invested in Fathom, we knew the Company had a clear path for growth as one of the earliest adopters of additive manufacturing in a fragmented manufacturing space that was only just realizing the benefits of the Industry 4.0 on-demand business model,” says John May, managing partner of CORE Industrial Partners. “As we predicted, the market has evolved in Fathom’s favor, and the Company maintains a strong runway for expansion with a high degree of organic and acquisition growth potential.”

“We have full confidence in Ryan and his management team as they embark on this new chapter,” says Bob Nardelli, board member of Fathom. “Along with the partners at CORE, we have built a strong company, drawing from managers and board members with a diverse range of personal and professional backgrounds, that is ready to capitalize on the significant secular growth opportunity presented by Industry 4.0.”

Details of the Transaction

The transaction is valued at a pro forma enterprise value of $1.5 billion. The acquisition will be funded through a combination of ATMR’s cash in trust and an $80 million fully committed common stock PIPE at $10 per share.

The boards of directors of both Fathom and ATMR have unanimously approved the proposed transaction and it is expected to close later this year, subject to customary closing conditions, including a registration statement being declared effective by the Securities and Exchange Commission and approval of ATMR’s shareholders.

Additional information about the proposed transaction will be provided in a Current Report on Form 8-K to be filed by ATMR with the Securities and Exchange Commission and available here. 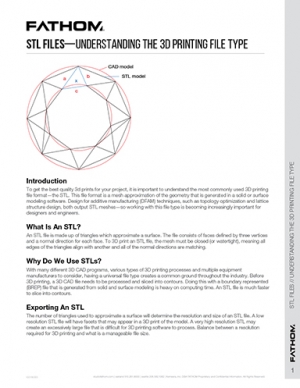