Earlier this year, we reviewed the Dell Precision 3530 (see DE January 2019), a system that delivered great performance and more than 9 hours of battery life at a very affordable price. Imagine our surprise when Dell followed up by sending us not one, but two new mobile workstations—the Precision 3540 and 3541—as successors to that very successful system.

Lifting the lids of both systems reveals a 15.6-in. display with a webcam centered in the top edge of the bezel, flanked by a pair of microphones and a camera status light. The webcam is optional on the 3540 but standard on all 3541 systems.

Both the 3540 and 3541 include a 102-key keyboard with a separate numeric keypad and mostly full-size keys. Though the base configuration keyboards are not backlit, the systems we received included backlit keyboards, an option that adds $35. 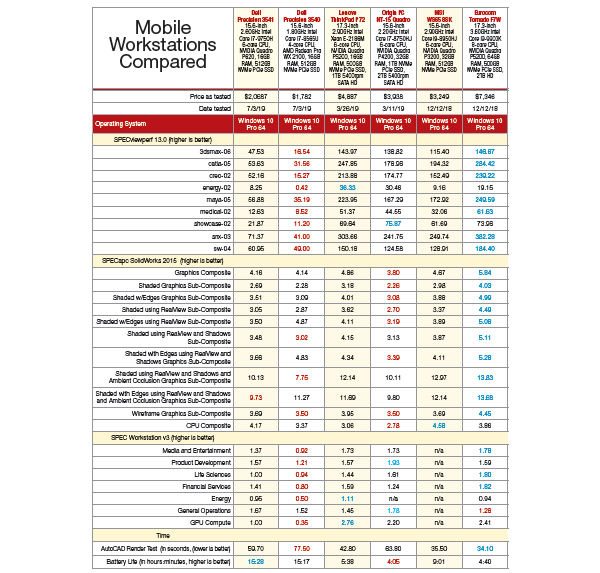 A round power button with optional fingerprint reader is located to the upper-right of the keyboard. Although the base configurations include only one pointing device and no fingerprint reader, the Precision 3540 and 3541 systems we received included both a 3.87x2-in. gesture-enabled touchpad with two buttons and a pointing stick nestled between the G, H and B keys, along with its own three buttons.

The available ports are identical for the Dell Precision 3540 and 3541. The right side provides a micro SD memory card reader, a headphone/microphone jack, two USB 3.1 Gen 1 ports, an HDMI port, an RJ-45 network port and a security lock slot. The left side hosts a round power connector, a USB Type-C 3.1 Gen 2 port with DisplayPort/Thunderbolt support, an additional USB 3.1 Gen 1 port with PowerShare and space for an optional Smart card reader. The remainder of the left side is consumed by a ventilation grille. There are no other ports or lights on the front or rear. The bottom includes only a fan vent and a pair of speakers for the built-in Realtek audio. Both systems included Intel dual band wireless AC 9560 adapters with Bluetooth 5.0.

Since both Dell Precision workstations are billed as budget-friendly laptops for “graphics or power-intensive tasks” and share many of the same features, you are probably wondering about the differences. Beneath the nearly identical exteriors, these are two very different workstations. 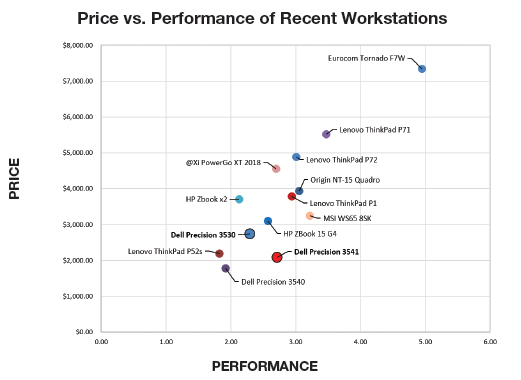 Price/performance chart of recent mobile workstations, based on the SPECwpc Product Development benchmark.

Our 3540 also included an AMD Radeon Pro WX 2100 graphics board with 2GB of GDDR5 memory and 512 cores. At $84, this is the only discrete graphics option offered for the Precision 3540. Our evaluation unit also included a 1920x1080 WVA display with 100% sRGB gamut and an infrared (IR) camera, adding $129. Touchscreen options are also available.

With the inclusion of the AMD graphics card, our evaluation unit also came with a four-cell 68Whr ExpressCharge-capable battery ($25) and a 90-watt power supply. Dell offers a choice of a standard power adapter with a 7.4-mm diameter barrel, or a power adapter that plugs into the USB Type-C port. Our system came with the latter, but if we had to choose, we’d opt for the standard power adapter so that the single Type-C USB port remained available.

Windows 10 Home 64-bit came preinstalled. Other OS options include Windows 10 Pro ($42) or Ubuntu Linux ($67). The Precision 3540 is backed by only a one-year warranty, not what we have come to expect from a major manufacturer. As tested, our Dell Precision 3540 priced out at $1,782 after applying current online discounts and adding $115 for a three-year warranty with onsite service after remote diagnostics.

Our Precision 3541 also included an NVIDIA Quadro P620 graphics processing unit (GPU) with 4GB of GDDR5 and 512 compute unified device architecture (CUDA) cores. At $90, this is the only discrete graphic option offered for the 3541. Our evaluation unit also included a 1920x1080 WVA display with 100% sRGB gamut and an IR camera, adding an extra $148. Touchscreen options are also available.

The inclusion of the NVIDIA GPU also required the addition of a six-cell 97Whr ExpressCharge-capable battery ($50) and a 130-watt power supply. Again, Dell included a power adapter that plugs into the USB Type-C port. We think users would be better served by an older-style adapter, freeing up the Type-C port for other devices while saving $21.

Although Windows 10 Home is included in the base configuration, the system we received had Windows 10 Pro 64-bit preinstalled, adding $42. Windows 10 Pro for Workstation is required for systems equipped with a Xeon CPU. Like the Dell Precision 3540, a one-year warranty is standard, but our as-tested price of $2,087 includes a three-year warranty.

That was where the similarities ended, however. On the SPECviewperf test, which evaluates pure graphic performance, neither system turned in great results, but the scores for Precision 3540 placed it at the bottom of the pack, comparable to an ultrabook rather than a full-fledged workstation. But scores for the SPECapc SolidWorks benchmark were much better for both Precision workstations, illustrating that they are indeed very capable of running mainstream CAD software.

On the very demanding SPECwpc benchmark, the Dell Precision 3541 performed moderately well, with decent results for tests more reliant on CPU and storage performance, while its graphics results were quite low.

For the Dell Precision 3540, the SPECwpc results were disappointing, with almost all results near the bottom of the pack.

The only high points here were results dependent on storage. The Toshiba M.2 drive in the Precision 3540 turned in the best storage subsystem score we have recorded to date. Scores on our AutoCAD rendering test were respectable at best, with the Dell Precision 3541 averaging 59.7 seconds to complete the rendering, while the Precision 3540 averaged 77.5 seconds.

Although neither system blew us away in performance, the Dell Precision 3540 and 3541 are half the price of those mobile systems with the top-rated benchmark results. Both are well-designed, affordable, lightweight, and deliver incredible battery life. Although either Precision workstation would be a great choice for a mainstream CAD user on the go, we preferred the Dell Precision 3541 thanks to its more robust graphics and better storage options.