TopSolid 7.12 Review: All in the Family 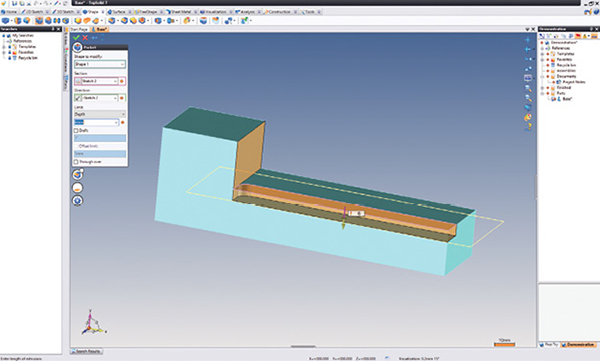 TopSolid’Design offers a well-organized interface. Most commands open a dialog box in which you specify parameters for the current tool. Images courtesy of David Cohn.

Reinventing VR and Collaboration in 2020
Join us for a live webinar to see how NVIDIA® Quadro® RTX™ and HTC are bringing people together...

TopSolid is a fully integrated computer-aided design and manufacture (CAD/CAM) program developed by the French company Missler Software, based on the Parasolid geometric modeler. Founded in 1977 as Missler Mécanique, the name was changed in 1984 to Missler Informatique. After a 1992 alliance with TopCad (the original publisher of TopSolid) and several other acquisitions, all the various entities were merged in 2001 to become Missler Software.

Since then, the company has focused on developing an integrated family of products targeting the mechanical, sheet metal and wood industries, “wherever a machine interacts with materials to machine, shape or produce a part.” 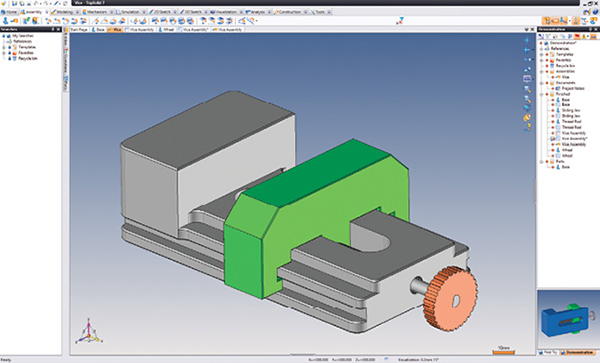 You can create assemblies using top-down, bottom-up or hybrid methodologies.

In addition to offices throughout France, Missler has offices in the U.S., Italy, China, Switzerland, Turkey and Brazil, and ships products throughout the world. The company claims more than 100,000 licenses worldwide. For this review, we looked at TopSolid’Design 7.12. The program features a Windows-compliant interface and a totally integrated product data management (PDM). TopSolid provides optimized management of large assemblies, powerful modeling and simulation tools, smart standard components containing machining information, and can produce detailed and standardized drawings.

TopSolid’Design 7 is built on a PDM foundation. The program features integrated PDM functionality that manages all documents. In local mode, the PDM manages your unshared work and does not require you to install a database server, relying instead on Microsoft’s SQL Server Compact Edition. If you work in teams, you can install the TopSolid PDM Server on a dedicated computer on your network and each user can then connect to it as a client to access shared data.

Data managed by the PDM is distributed into projects, which in turn contain documents that can be arranged into hierarchical folders. As a result, when you use TopSolid you first create a project and then create documents within that project for parts, assemblies, drafting views and so on. The PDM tracks document properties including names and part numbers. You can add custom properties and even have TopSolid automatically assign part numbers. The PDM also provides a vault you can use to control check-in and check-out of documents. The PDM automatically manages revisions each time a document is modified and put into the vault. You can then access the different versions of a document, and see the history of certain actions.

When you start TopSolid, the program opens to a Start Page. From here, you can access recent documents, or start a new document or project. You can also access PDF files covering Help, separate tutorials for TopSolid’Design and TopSolid’Cam, a 372-page User’s Guide, and a What’s New document. There are also links to the TopSolid website, an online store, a user forum and the TopSolid Blog.

The TopSolid user interface consists of a large document window surrounded by various tools. In addition to the Start Page, each open document has its own tab within the document window. The title bar shows the name of the document currently being edited, along with an indication of whether it has been modified since the last time it was saved. Below this, the main menu provides access to currently available commands, which are organized onto a series of labeled tabs.

Each tab (or working bar) contains square icon-only buttons. Although you can change the size of these buttons (which requires a program restart), they lack text. While learning the program, you must hover your cursor over a button to see a tooltip to verify you are selecting the desired command. Some commands are also accessible via the application icon in the upper-left.

By default, a Searches panel is anchored on the left and a tabbed panel for current and recent projects is anchored on the right. Collapsed tool windows extend down the left side of the document window. When expanded, these show the entities tree (containing the result of work performed), the operations tree (representing the sequence of actions that led to the results shown by the document entities) and the parts tree (listing parts contained in an assembly). Any of these panels can be anchored, collapsed, moved and closed. 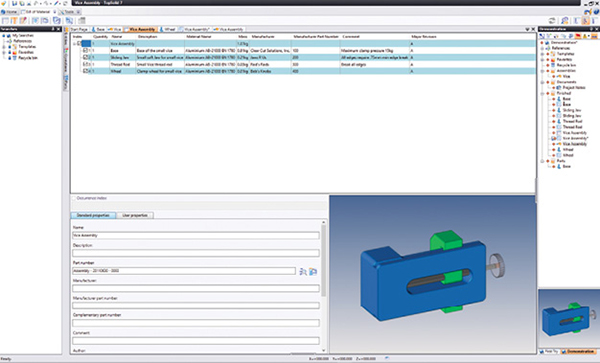 TopSolid makes it easy to create a detailed bill of materials, thanks to its integrated product data management.

Within the document window, a compass in the lower-left helps you to orient the view, while tools in the upper-right let you pan, zoom and rotate the view; split the screen into multiple views; and so on. There is also a scale indicator in the lower-right to help you better understand the size of the objects in the window. A status bar extends across the bottom of the screen.

Whenever you create a new part, you can select the material and template to build the part. You can make similar choices whenever you create any other type of new document, such as an assembly, drawing, bill of materials (BOM) or exploded view. Once the part document is open, TopSolid works like many other mechanical modeling programs. In other words, you begin by creating a 2D sketch. As you sketch, contours appear purple while under-constrained and turn blue when fully constrained.

Once you have sketched a 2D profile, you can operate on it to create a 3D shape. You access most commands from the toolbar. For example, to extrude a sketch, you switch to the Shape tab and then select the Extruded tool. However, some commands can also be accessed by right-clicking to display a contextual menu.

For most functions, a dialog box then opens in the upper-left corner of the document window. Here, you can enter parameters for the current tool. But you can also use controls in the workspace to work interactively or double-click a dimension to make it active and then enter the appropriate value. When done, you click a green checkmark to complete the command.

To add a feature, you must create another 2D sketch. You can simply click a face to set the support plane to that face and then sketch new contours on that face. When sketching, TopSolid typically switches to a top view of the work plane, although you can create spatial sketches when you need to create profiles that are not planar (such as when modeling pipes or springs). You can also add 3D shapes—solid primitives such as blocks, cylinders, cones and spheres.

TopSolid offers a distinct drag-and-drop technique. For example, to add the same fillet to another edge, you can press CTRL and drag the existing fillet onto another edge. If the program cannot determine onto which element you are dropping the fillet, you can tap the right mouse button while continuing to press the left mouse button until the desired edge or face is highlighted, and then release the left mouse button, a process TopSolid calls “rotary picking.” You can also select a fillet and then, while editing that fillet, select another edge to add it to the definition of the fillet.

When creating assemblies, you typically bring in the base part and then drag and drop other parts from the tree. But in addition to this bottom-up method (creating parts independently and then assembling them together), you can use a top-down mode (creating parts in-place), or use a hybrid method that incorporates both. Parts initially appear purple (unconstrained). You then use positioning tools to add constraints. 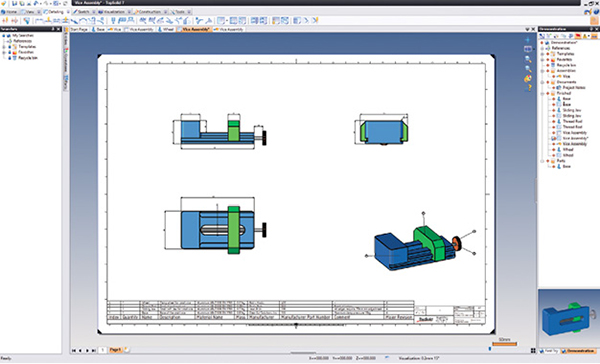 Assemblies can be either rigid or articulated. If articulated, they are called mechanisms, and TopSolid provides a host of tools to define the assembly’s kinematics. You can also run dynamic and kinematic simulations to study your designs. TopSolid lets you quickly produce a bill of materials and drawings (called draftings) of the individual parts in an assembly. Tools for fashioning title blocks, adding dimensions and notes, creating hatching and so on, are rather basic, but you have total control over the appearance of these drawing elements if you drill down deep enough into the various settings.

TopSolid also includes tools for working with sheet metal, such as cutting nesting parts from a single sheet. There are also functions to generate a mechanically welded chassis, produce piping and create photorealistic renderings.

Missler also offers modules for finite element analysis (FEA), creating core and cavity block splits and sub-inserts, designing strips made by progressive dies and analyzing plastic flow. And as previously mentioned, the company sells additional CAM modules you can use to manufacture your designs while remaining within the integrated TopSolid environment.

TopSolid 7.12 offers numerous enhancements over the previous version, including support for 4K monitors. The compass now includes small spheres to help when orienting the model and you can change its size and position. There are also numerous improvements to the PDM, including better data-checking and search. When sketching, automatic hatching lets you quickly view all profiles of a sketch, and a new Paths Around Faces mode lets you retrieve the contour of several faces.

A new Extruded Faces command lets you extrude a selection of faces by specifying a direction and length. You can also add draft to an extruded shape with a non-planar section. The option to apply draft is available regardless of whether you select a 2D or 3D sketch. Enhancements to the subtraction Boolean command include a new section to define a clearance with the shape to subtract. You can also specify the direction of the operation.

From left to right: TopSolid 7.12 includes new tools for retrieving the contour of several faces, extruding with draft a shape with a non-planar selection and performing a Boolean subtraction with clearance.

When importing STL files, you can choose to import faceted shapes. This new mode lets you create shapes with meshed geometries. Sheet metal improvements include the ability to bend several coplanar faces at the same time. There are also minor appearance changes when working with assemblies and the ability to use slave parts so that you can machine a part before you have finished its design and load the part without having to load the entire assembly.

You can download a 30-day free trial from either the company’s website or the TopSolid blog. You must register and create an account before you can begin the trial. In addition, each time you start the program, it asks if you want to import libraries, which can be time-consuming. You can change program settings if you don’t want to go through this every time you start TopSolid.

TopSolid is a complete program with lots of additional modules, each of which will take time to master. According to a Missler representative, a typical CAD/CAM installation costs around $10K. TopSolid offers lots of power once you climb its learning curve.