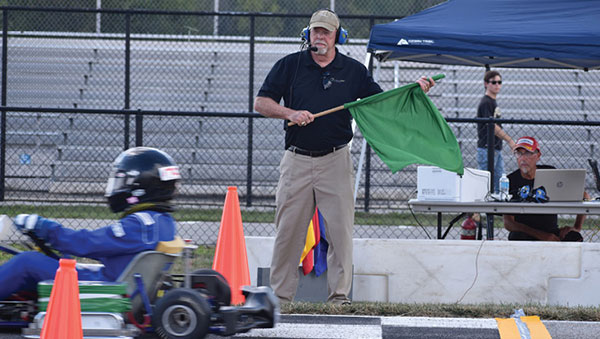 The event allows students to get hands-on experience with electric vehicles as well as training in several professional skills. The high school division is a completely on-spec series, while the college level is more innovative and the rules are more open. Students can make their own motor, battery pack—but they have to buy a chassis. Images courtesy of Jim Romeo/Purdue University.

Special Industry Focus: Designing for Automotive
Read about the latest developments in automotive design and engineering.

Purdue University’s evGrand Prix is an annual competitive electric go-kart race that brings together high school and collegiate teams from all over the world. Racers build their own go-karts, tune the powertrain and chassis dynamics, and then put them to the test.

The event also allows students to get real hands-on experience with electric vehicles as well as training in several professional skills including marketing, presentation, community engagement, teamwork and project planning.

Danny White is the manager of Purdue Motorsports and managing director of the evGrand Prix at Purdue University. We spoke to Danny to learn more about this event. 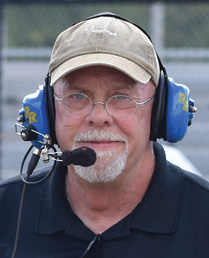 Digital Engineering: Can you provide an overview of the evGrand Prix 2021 competition, how it came to be and the intent of the program?

The evGrand Prix is more than just a race: It has several components. Students have to participate in outreach competitions and academic challenges. Ultimately, we are preparing students for going to college or introducing them to careers in these tech fields through trades. They need to be prepared for the emerging field of electric vehicles. This can open many doors.

The race is the “final lab,” and their laboratory is the racetrack.

I look at this as an educator: This is not about getting the bragging rights at the race. It’s about how you and your team can navigate decision-making, problem-solving and all the other issues one faces. It’s pretty intense. 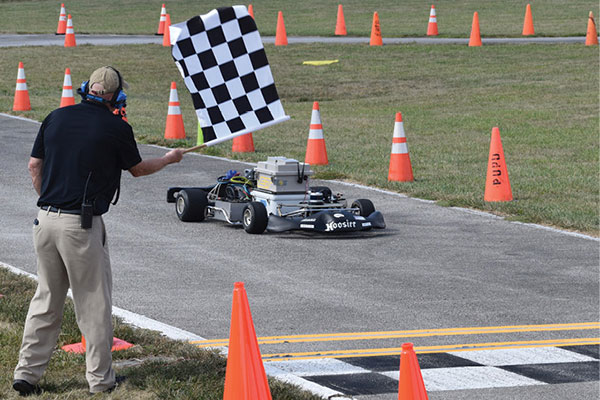 Racers build their own go-karts, tune the powertrain and chassis dynamics, and then put their carts to the test.

Currently in evGrand Prix, there are three divisions: autonomous (university-based series), collegiate and high school. We discovered that for autonomous, you must have grad students and a professor working with undergrads to make it successful.

For the autonomous division this year, three teams participated in the race. Kennesaw State successfully made five laps around the Purdue Grand Prix track in West Lafayette. The last lap was about 1:12. It was a great day for them as they have tried so hard for several years. They had one student who had been on the team for four years, so it was great to see their success.

Collegiate had seven EV [electric vehicle] go-karts participate. Several schools shared that there were some technology and older equipment issues.

There were 12 schools that participated in the high school division. Most schools build their EV go-karts as part of their class project for the year and get credit. Other schools use it as an extracurricular program. Others are technical education or charter schools. When we were designing the EV go-kart program, we consulted schools and students—especially those who had robotic teams. Many of them said building an EV go-kart would be a cool option as it was something they could all do. There’s a lot of math and physics in the EV go-kart. Teams must set the chassis dynamics up right and balanced; cross-weights need to be right. They learn so much applied math, physics, geometry and some chemical engineering and data analysis. Even after the race, they are reviewing data and everything that happened at the track. This gives them a way to be interested and to understand the “why” and prepare themselves for next year.

We also work with state economic and trade groups for this project. It encourages strong and basic math skills, which are appreciated from an employer’s standpoint. The students also learn about soft skills and time management.

DE: Who will be participating or who has participated?

White: We have a wide diversity of participants. It’s a mixture of big city, suburban and rural schools. There are also sponsorship and partnership opportunities for schools who might not have enough funding. We have seen partnerships between schools and sponsors flourish through the years.

They have students who work on marketing, outreach, engineering and technology and logistics. It turns out [to be] very entrepreneurial. They are building and running their own race team. We’re bringing the business community into the school. One of our newer partnerships allows for technical assistance by using retired United Auto Workers (UAW) members to assist with technical guidance.

DE: Can you tell us about some of the designs that are part of the event and how they came to be?

White: The high school division is a completely spec series, with everything being the same. We keep it spec so they know how to do the setup. The college level is more innovative, and the rules are more open—a true developmental series. They can make their own motor, battery pack—but they have to buy a chassis. We’re trying our best to think outside the box and be creative.

The changes in technology have been great. Ten years ago, we used large battery packs that were about 60 lbs. each. Now they are much smaller, lighter and more powerful.

For the university autonomous series, they had to think outside the box. They have to figure out their computer stacks and sensor arrays. We may have one team that wants to partner with a manufacturer, and they can. Students can learn the systems—and then hopefully get internships and jobs. They are so different because they are working with a different system.

DE: Can you provide some examples of what the event has produced or what you expect it to produce?

White: We have former race team members who have worked with SpaceX and Tesla. We have students who work in a wide variety of capacities with auto racing teams. The main drivers, of course, are a passion for motorsports and willing to work through a variety of situations. They don’t give up.

Another main goal is economic development. Companies can see that Purdue is providing that quality student [as a potential] incoming employee as this industry quickly transitions. There’s a big need for engineers and business majors. There are opportunities to rethink assembly lines. We’re preparing students for their future.

As we look at the automobile industry and racing, we’ll still maintain internal combustion engines, but any new venture needs to be electric. That’s where the country’s going. That’s the future. We’re leading the way. We want the nation to get that. Purdue is one of the most innovative schools in the world. Where can I get those engineers? We’ve got the resources to take you where you want to go.