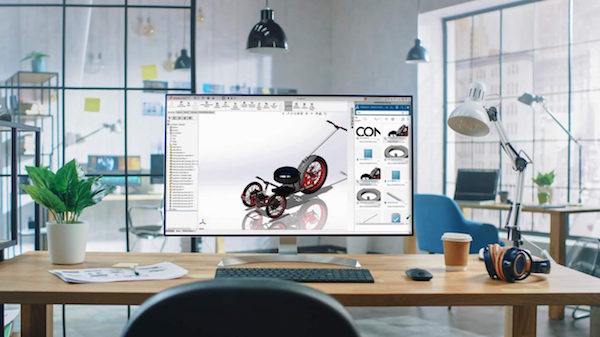 Life in many respects has come to a halt because of the pandemic. Yet, in the realm of pixels and bytes, software development continues almost uninterrupted. This month, the widely adopted mechanical modeler SOLIDWORKS gets an update.

Aside from the usual list of enhancements and improvements, something else is visible: the connection to parent company Dassault Systèmes’ offerings. Even the branding reflects this shift. The ancillary products around SOLIDWORKS are collected under the name 3DEXPERIENCE WORKS, semantically joining Dassault Systèmes’ 3DEXPERIENCE platform with the long-established SOLIDWORKS.

Connected to the Cloud, Augmented by Dassault

Speaking to the press before the release of SOLIDWORKS 2021, Gian Paolo Bassi, DS SOLIDWORKS CEO, remarked, “We are expanding our footprint, well above 5 million users, with 453,000 certified users. The ecosystem is expanding healthily.” He described the new release and associated products as “a cloud-centric, expanding portfolio.”

The SOLIDWORKS desktop modeling program comes in three distinct editions: Standard, Professional and Premium. This is a continuation of the tried-and-true formula, with additional features in Pro and Premium versions to justify the higher price.

3D Creator is a cloud-hosted 3D program for quick concept creation and collaboration. Also cloud-hosted, 3D Sculptor is a 3D program for creating organic shapes using subdivisional modeling methods. Both come with the option to export models to SOLIDWORKS. They are accessible from mobile devices and tablets. In his introduction of the new release, Bassi described 3D Creator and 3D Sculptor as “the two crown jewels.”

Taking Advantage of the GPU

Historically, parametric CAD programs rely on the CPU’s processing power more than the GPU. But things are definitely changing. Craig Therrien, senior product manager for SOLIDWORKS, recalled, “In SOLIDWORKS 2019, we really started to take advantage of your GPU a lot more. If you have a certified graphics [accelerator], you were able to make SW perform a lot better in terms of framerate, speed, and graphics. In 2021, we decided to make the option to use the certified graphics [accelerator] a default option.”

In SW 2021, the GPU plays a crucial role in speeding up occlusion culling and rendering silhouetted edges, Therrien added. The improvement in framerate is expected to produce smooth movements when you rotate large assemblies. By contrast, using SW with an underpowered GPU can produce jerky movements in model rotation. 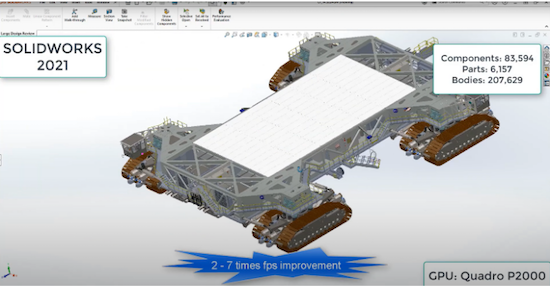 Graphics performance has been further improved in SOLIDWORKS 2021, particularly for large models. Image courtesy of SOLIDWORKS.

“When it comes to manipulating large assemblies and drawings, taking advantage of the certified GPU offers huge benefits,” Therrien remarked. 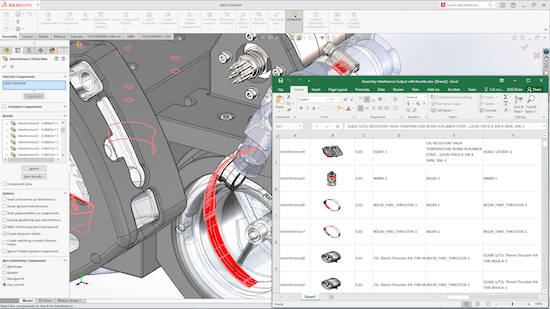 SOLIDWORKS 2021 gives you the option to export an interference list with thumbnails of the parts involved. Image courtesy of Dassault Systemes.

Sheetmetal design, a popular module in the software, now allows you to add flanges in non planar edges. The software now supports up to 60 steps of Redo in the 3D model itself; previously this was possible in sketch mode only. 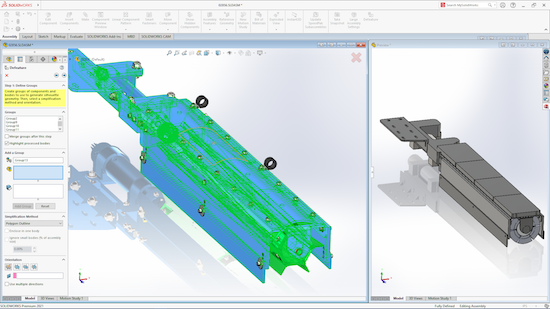 You can save defeatured components so you can toggle between the defeatured version and the detailed version in assemblies. Image courtesy of Dassault Systèmes.

Simulation features in SW 2021 are enhanced with mesh diagnostics, improved meshing and improved convergence through contact stabilization, according to the company’s announcement. The new version expands the types of flow problems that can be solved, and introduces a feature called Rotating Region, which allows you to specify the rotation motion of certain flow-producing components (such as fan blades). In heat transfer simulation, SW 2021 gives you the Flux Plot option, which lets you map out the heat sources and transferred heat loads’ destinations.

In previous versions of SOLIDWORKS Visualize, only the last saved configuration of the model was available for rendering. In 2021, all configurations are accessible from a dropdown menu, allowing you an easy way to import the desired version of the model for photorealistic rendering. It also allows you to copy and paste appearances from one part to another, making it easier to duplicate one part’s properties (such as materials and colors) on another. More controls have been added to rendering 3D-printed parts, down to the orientation of the texture so you can accurately recreate the print direction, for example.

A Space Station as a Test Project

To test the new software’s ability to host and facilitate collaboration, the company took on a side project—the digital design of a functional space station with simulated gravity. “We designed a space station, 2 km by 1 km, divided into 50 modules. More than 500 people collaborated on it throughout 8 weeks,” he recalled.