Data Acquisition System is Key to Engineering a Smarter Dummy

The Quality Leader’s New Product Introduction Playbook
The market's visibility to early quality issues has never been greater and will continue to...
Testing Services Resources 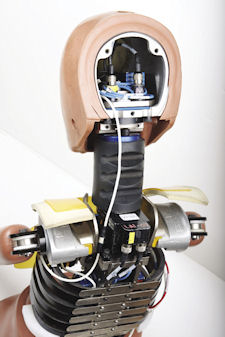 DTS offers three in-dummy DAS options: the new 36-channel SLICE G5 DAS, the original 32-channel TDAS G5 DAS, and SLICE NANO 3-channel blocks, shown in a child dummy with 9 channels in the head, 21 channels in the torso and 3 channels in the pelvis. Image courtesy of DTS.

The World Side Impact Dummy (WorldSID) crash test dummy represents a major step in unifying regulations on a global level for the automotive crash test industry by allowing a single, universally accepted test device to be used for side impact testing around the world. The combined efforts of one ISO task group, 10 countries, 45 organizations, 1,000 tests and about $16 million have created the world’s most biofidelic side-impact crash test dummy. The WorldSID 50th (50th percentile, or average male) and 5th (small female) have far-reaching ramifications not only for car manufacturers and test engineers to produce safer vehicle designs, but for the ultimate goal of reducing injuries in side-impact crashes.

Developing the WorldSID has been a slow, uphill road that has steadily driven the automotive crash test industry forward to setting universal test standards. In the early 1980s, the US developed a side impact dummy dubbed USSID. Following that, Europe designed its own version called EuroSID, and then a second generation, EuroSID2. The challenge for car manufacturers selling globally was that they had to go through two different, time-consuming and costly testing processes—one using the USSID and another with the EuroSID.

Car companies and the test world came together to unify efforts, and in 1997, an official ISO WorldSID Task Group was established to create the first SID that would be accepted for use in impact testing for any regulation around the world.

The first production WorldSID 50th system was completed in March 2003, with the first WorldSID 5th following a few years later. It has since undergone years of continuous development, testing and refinement. WorldSID is expected to go into regulation in the next one to two years, and will be the first dummy designed for worldwide regulation testing and with in-dummy DAS standard.

Crash test dummies have been around for a long time, with the very first crash test dummy created more than a century ago in Paris. However, mainstream crash test dummies really evolved in 1949 when “Sierra Sam,” created by Sierra Engineering, became the first modern production anthropomorphic test device (ATD) developed for aircraft ejection seat testing. 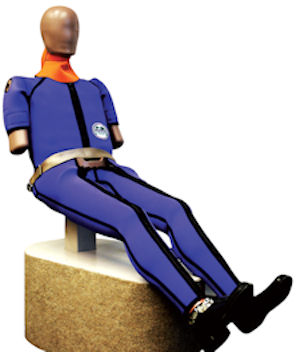 The original WorldSID crash test dummy was developed over the course of six years by an international team. Image courtesy of WorldSID.

Vehicle crash test dummies were the next step, and it was agreed that a single test dummy was not enough. This led to the development of different types and sizes of dummies, as well as different types of tests. As a result, frontal crash tests require a specific type of dummy, the Hybrid III; for side impacts, there is the new WorldSID; and a variety of component parts such as legforms and headforms are launched into the front bumper and hood of a car to simulate pedestrian injuries. The family of dummies includes average to large males, females, children and even dummies simulating pregnant females. A single dummy may take anywhere from 15 to 20 years to develop.

Originally cumbersome and limited to a single test measurement, crash test dummies have evolved into sophisticated test equipment capable of repeatability and true biofidelity. Today’s dummy is instrumented with an average of 64 to100 channels; WorldSID is designed for up to 160 channels. A full-scale crash test may involve up to 500 instrumented channels, including vehicle, dummies and test fixtures.

Traditionally, each sensor embedded inside a test dummy requires a wire that is connected to an external data recorder. In the early days when there were only a few sensors and cables, it was a relatively easy task. Today’s high-channel count tests require serious cable management to deal with the massive bundle of wires that can affect test results and reduce repeatability.

According to the ISO, the World Side Impact Dummy was developed to allow a single, universally-accepted test device to be used for side impact testing in any regulation around the world.

The design details are documented in ISO 15830:2005, “Design and performance specifications for a 50th percentile male side impact dummy (WorldSID).” The documentation includes nearly 500 pages, not including the 400 fabrication drawings and CAD files. It contains all of the design details, material specifications and performance standards required for the fabrication of the WorldSID, according to ISO.

Before WorldSID, there were three different adult male dummies commonly in use that were developed independently from one another. The ISO says WorldSID is intended to allow a single test procedure to be used for side impact in any regulation around the world.

As the first regulation dummy with in-dummy DAS, WorldSID gives new meaning to the term “plug and play.” The TDAS G5 DAS is the first data recorder designed to fit inside a dummy as part of a regulation standard (ISO 15830).

A data recorder was designed to fit in the chest, pelvis and legs of WorldSID, all without disturbing the critical dummy center of gravity (CG). Both WorldSID 50th and 5th use the same TDAS G5 in-dummy DAS technology.

“TDAS G5 dramatically changed the scope of testing by making in-dummy DAS part of the ISO specifications, and bringing the world of testing to a higher level of sophistication,” says Diversified Technical Systems (DTS) co-founder and company President, Steve Pruitt. “In a typical vehicle testing scenario, where advanced test preparation can consume a week, cutting down that time by eliminating cables becomes a real benefit. It also removes potential inaccuracies caused by cable weight.”