Open source CAE can be more cost effective and provide greater transparency than commercial simulation codes, but the learning curve is steep.

Open source CAE can be more cost effective and provide greater transparency than commercial simulation codes, but the learning curve is steep. 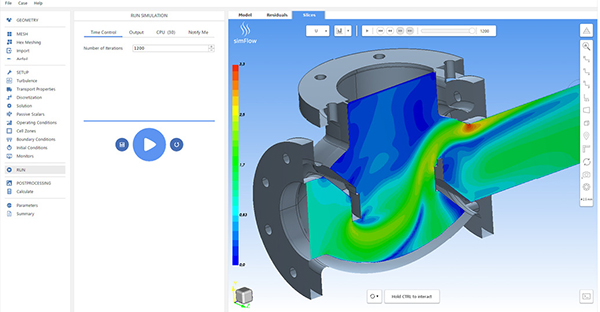 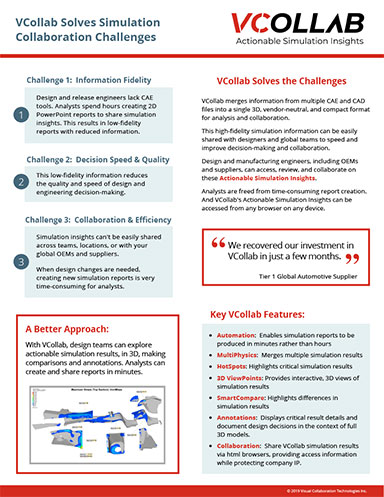 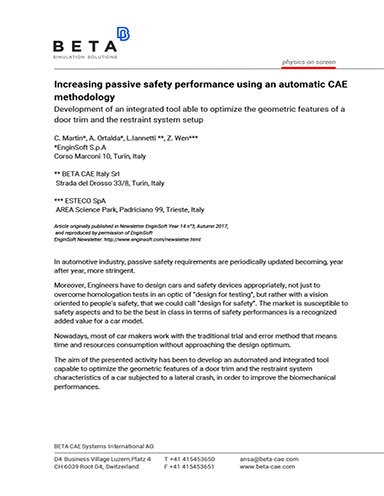 Simulation is fast becoming a familiar and consistent part of the design workflow, but engineers may be less acquainted with open source options, which can offer a cost-effective alternative to commercial applications for enterprises willing to invest the time in what can be a rather steep learning curve.

A variety of well-established open source platforms in the simulation space cover computational fluid dynamics (CFD) and finite element analysis (FEA) along with a contingent of specialty codes for specific industries (such as aeronautics and nuclear reactors) and particular use cases.

In the FEA space, Code_Aster, developed and maintained by the French Department of Energy in the 1980s for engineering nuclear energy facilities in France, and Elmer FEM, open source multiphysics simulation software developed by the CSC-IT Center for Science, are among the best-known entrants.

The CFD category has numerous options with OpenFOAM dominating the landscape, accompanied by SU2, a suite of open source tools written in C++ for CFD and aerodynamic shape optimization.

There are also lesser-known entrants such as Palabos, Fire Dynamics Simulator, a large-eddy simulation code for low-speed flows that emphasizes smoke and heat transport from fires as well as Multiphase Flow with Interphase eXchanges (MFIX).

MFIX is CFD code for modeling reacting multiphase systems developed at the National Energy Technology Laboratory, part of the U.S. Department of Energy and focused on applied research for the clean production and use of domestic energy resources.

Though most open source CAE codes have been around for some time, they tend to appeal to a mostly niche audience, often rooted in academia, or by small pockets of highly specialized experts looking for very targeted solutions. In fact, use of open source CAE is pretty limited, especially at mainstream enterprises, maintains Stewart Bible, managing partner at Resolved Analytics, an engineering services company specializing in CFD as part of product design.

“Our customers are typically not invested enough in CFD to do it themselves,” notes Bible. “They’d rather not learn CFD from the ground up or hire a CFD engineer because they don’t have enough products to require that kind of investment.”

Nevertheless, there are tangible advantages to leveraging open source CAE along with a budding ecosystem of vendors offering solutions that build on the core code to make it more user friendly and accessible. Though benefits vary depending on the option, there are some consistent advantages in going the open source route, most notably, significantly reduced costs, transparency of the code and the ability to extend tools with highly specific, customized options.

The biggest draw is economics, given that open source isn’t associated with the typically steep licensing fees that accompany most commercial CAE packages. Licensing fees for off-the-shelf CAE tools are usually correlated to the number of processors engaged, which means costs can quickly escalate when bringing out the high-performance computing guns to solve computationally-intensive models and calculations.

“Cost is the biggest driver to go to open source,” says Robin Knowles, founder of CFD Engine, a consultancy focused on helping customers with CFD workflows built around OpenFOAM. “If customers see that open source code can do what they want it to do as well without the license fee attached, that’s the compelling reason to go in that direction.”

The flexibility to change code and extend CAE functionality with one’s own bespoke capabilities is another reason some favor the open source model. There is also an upside to code transparency—an important benefit when simulation results are critical to driving product performance and safety.

“When the level of science is really challenging, software needs transparency and that’s what open source provides,” says Chris Greenshields, a director of the OpenFOAM Foundation and the managing director of CFD Direct, the architects of OpenFOAM and a provider of OpenFOAM training and support services. “You have to be able to cast your eyes over the code—if you can’t interrogate results, that’s a problem.” 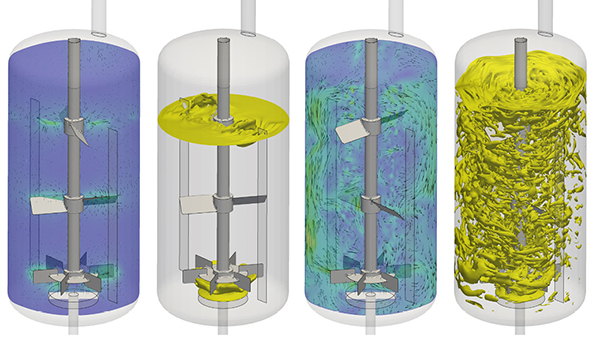 OpenFOAM CFD simulations can investigate the effects of reactor design and operating conditions on the reactor performance and efficiency. Image courtesy of CFD Direct.

On the flip side, there’s a much steeper learning curve to open source CAE and while there is a large community of engaged users, there isn’t a formal support channel, which means users can’t count on getting answers to questions in the heat of the moment.

Though there are plenty of trainings and workshops, particularly those keyed to OpenFOAM, often questions on forums can be left unanswered for quite a while, says Dan Combest, manager of North American operations for ENGYS, a company that offers the Helyx CFD platform, which uses the open source OpenFOAM C++ library as the core code base.

“OpenFOAM workshops are fantastic and there are community events where people share ideas, but it can be difficult to get answers to questions,” he explains. “You need an answer when you need an answer and that’s why some companies shy away from using a complete public project with no official support.”

Another hurdle for some engineers is although the open source CAE codes deliver the core solver capabilities, they often lack components for other pieces of the workflow like meshing and visualization capabilities for interpreting results.

“With open source, you often have to run a meshing tool, import results into CFD and export those results to a visualization tool,” Bible says. “That broken up workflow costs me time and most can’t afford that time.”

Time spent navigating a disconnected workflow, not to mention, coming up the learning curve for open source CAE can actually create hidden costs.

“If it takes four weeks of learning for every new problem an engineer encounters, it can easily add up to what you paid for the license,” Bible adds. “And what if you invest time in an engineer to learn relatively challenging software and then they leave after a year?”

Greenshields, one of the founders at OpenCFD, which promoted OpenFOAM and was sold to Silicon Graphics in 2011 and eventually taken over by ESI Group, counters the charge that open source opens the door to brain drain. On the contrary, because OpenFOAM is text- and file-based as opposed to a graphical user interface, a record of the CFD workflow and scripts are captured and maintained.

“Someone can come back later and run the script, but if it’s stuck in someone’s head, the day they walk out the door, your CFD capability walks away,” he says.

Of all the open source CAE programs, OpenFOAM has the most evolved ecosystem, including various third-party offerings built around the core code. Greenshields says the key to a successful open source platform is adhering to a blueprint that recognizes the importance of ongoing maintenance.

“It’s all about redesign, repair and publishing, and whoever funds the initiative has to understand this,” Greenshields says.

As part of its continuous maintenance, CFD Direct focuses on accessibility, usability, robustness and extensibility.

“We send a message to companies that we need ‘no-strings-attached funding’ to do the work,” Greenshields adds. “Beyond maintenance funding, there are partnerships to add new capabilities to the platform, like the one with a consortium of companies from the process industry aimed at flows with highly complex flow simulations.”

Numerous CAE platforms are built on open source libraries that make the tools more comparable to commercial offerings. SimScale, for example, has integrated a remix of OpenFOAM and Code_Aster to offer CFD and general thermomechanical capabilities (with FEA) into its platform. SimScale’s mantra is to focus on proprietary CAE, UI/UX and cloud capabilities and enhance it with proven open-source technology. 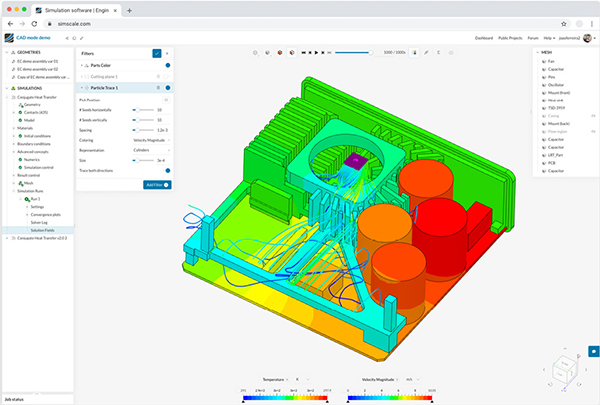 Conjugate heat transfer simulation of an electronics cooling application. The simulation is set up in a web browser and runs in parallel in the cloud. Image courtesy of SimScale.

“By using validated open source technologies, we reduce the time to market of features requested by our users,” says Jon Wilde, SimScale’s vice president of product. “Then we can focus on the deployment of accessible and collaborative CAE tools on the cloud, which requires specific development skills and investments. Our engineering simulation platform can organically grow to offer, create or customize any solver, and we can develop and scale it as needed.”

SimFlow also leverages open source technologies so it can focus on where it can deliver value—in its case, providing a CFD user experience that is comparable to what Windows users are accustomed to. SimFlow’s intuitive GUI makes it easier to install the software and create and import meshes, define boundary conditions, even integrate a post-processing workflow using ParaView, a popular open source multiplatform data analysis and visualization application.

“Why reinvent the wheel?” asks Daniel Jasinski, technical director at SimFlow. “Our idea is that experienced CFD users should open the software and start using it out of the box. We are the middle ground—delivering the benefits of a commercial CAE product without the cost.”