Materialise Sees Sustainability as the Future of 3D Printing

Company focuses on reduction in waste, improvement in material re-use.

Company focuses on reduction in waste, improvement in material re-use.

Materialise Magics 25 allows users to simulate multiple parts at one time, speeding up the simulation process and allowing them to predict the effect that parts may have on each other. Image courtesy of Materialise.

Improve Structural Performance of Products
Product developers are under pressure to develop and deliver innovative new products in shorter amounts...

Additive manufacturing (AM) software and services vendor Materialise says two data points tell the story of 3D printing for manufacturing. The first is 80%, the percentage of manufacturers using 3D printing in some fashion, primarily prototyping. The second is 50%, the amount of waste typically generated by laser sintering, the most popular process for prototyping.

Both percentages come from Materialize polling existing clients and customers. Materialise also says their clients would increase the use of additive manufacturing processes if they could reduce risk, reduce cost, and reduce time to return on investment (ROI).

“If you assume 3D printing is by definition sustainable, then you are greenwashing,” claims Materialise CEO Wilfried Vancraen. Companies looking to lower their environmental impact must take into consideration energy use, pre- and post-production issues, and printing waste. “We are strong believers that we can add value in the direction of a more sustainable world, but let’s not fool ourselves. We must do the effort to achieve real sustainability.”

Every part of a manufacturing process can benefit from a sustainability review, adds Steffan  Motte: “Waste is like a virus in its omnipresence. It is a blocking factor well before production starts, all the way back to design.” 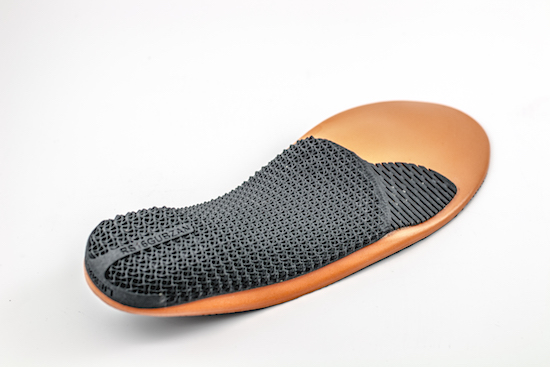 Materialise and BASF conducted a Lifecycle Analysis (LCA) recently to get a closer look at sustainability in additive manufacturing. They studied the production of one million pairs of midsoles, assessing the environmental impact in all stages of the product life. They compared the environmental impact of three 3D printing technologies with a conventional manufacturing technology: polyurethane casting. The LCA indicates that for large series of identical products, 3D printing is currently not the most sustainable choice and has a bigger impact on climate change and the depletion of fossil fuels compared to conventional manufacturing technology.

Most of the announcements Materialise made at its recent annual conference (moved online like everything else these days) aim for the sustainability agenda. The first was Bluesint 12, a laser sintering specification that allows material reuse. Materialise says when residual powder from a previous 3D printing project is used, it creates an “orange peel” effect in which surface texture is “largely unusable.” Materialise says this orange peel effect is caused by “shrinking that occurs when the powder cools down between two consecutive sintering processes.” The existing solution is to mix used powder with fresh, a process Materialise calls “clearly not sustainable.”

The Bluesint 12 process uses a 3D printer with multiple lasers. One laser sinters the powder and a second laser keeps the powder above a certain temperature threshold. By preventing the powder from cooling down between two layers, Materialise says the orange peel shrinkage is prevented. The result, the company says, is a printed object with similar mechanical and visual properties but printed with 100% recycled powder, drastically reducing waste.

Over the course of 2021, Materialise plans to have several Laser Sintering machines running Bluesint PA12. In the start-up phase alone the company aims to re-use more than five tons of powder that would normally become waste.

Another new product announcement addressing sustainability is Materialise Process Tuner, an online platform the company says will “help manufacturing companies, service bureaus and machine builders speed up the process tuning required for mass-manufacturing 3D printed parts. This allows them to reduce the cost and waste associated with printing hundreds of test samples before finding the optimal process parameters.”

Scaling up part production into the thousands or even millions requires companies to validate the print process, which means dealing with countless parameters that often influence each other. Materialise says as a result, validating the print process for a single part can take up to 1,000 test samples, requiring dozens of test builds and weeks or even months of work. “This complex and time-consuming process of trial and error is not sustainable.” the company notes in background materials on the new service.

“When we ask companies what the main obstacles are for scaling up their production, they tell us it’s too expensive, too complex and too time consuming. As a result, some companies think twice before scaling up,” says Motte. “With the Materialise Process Tuner, we allow them to find the optimal print settings without wasting machine and engineering time. In our own 3D printing factories we were able to reduce the cost per optimized parameter set by 50%, which is impressive.”

During its conference Materialise also introduced Magics Storefront, a cloud-based ecommerce and CRM solution for AM service providers. It also announced the release of the 25th edition of Magics, its software for AM data and build preparation. This update has a focus of streamlining workflow, or as their announcement claims, “achieve more with less clicks.”