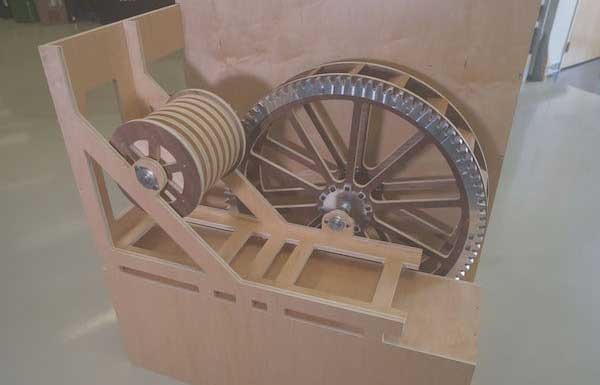 The water wheel model is made from prefinished plywood and was machined down on a 3-axis router. The mechanical components are aluminum and steel and machined on a Haas VF2 CNC. The scaled-down version has a working drive gear assembly, and is powered by a small pellet stove gear motor. Image courtesy of Mastercam.

CNC Software, Inc., developers of Mastercam, has formed a partnership with the American Precision Museum (APM) and Haas Automation to create a model of an historic water wheel. APM reproduces the atmosphere of a 19th century water-powered manufacturing facility, and includes exhibits of historic machines.

The APM factory was originally powered by a great water wheel, located in the basement, which drove a drum that carried belts up through the ceiling to the overhead line shafts on the factory floor. Those shafts turned smaller belts that powered the machines. APM is partnering with Mastercam to recreate a waterwheel to have on display in the museum demonstrating how running water was turned into power to drive the building.

Engineers at CNC Software designed a functional scaled-down version of the original waterwheel based on a 2009 study of the original factory and wheel. The assembly was designed in Mastercam for SOLIDWORKS and programmed and machined using Mastercam. Most of the assembly is made from prefinished plywood and was machined down on a 3-axis router. According to the company, the mechanical components are aluminum and steel and machined on a Haas VF2 CNC. The scaled-down version has a working drive gear assembly, and for display purposes is not powered by water but instead uses a small pellet stove gear motor.

“CNC Software is proud to partner with the American Precision Museum. APM is helping to tell the story of how mass production changed the world and shaped America,” says Meghan West, CEO of CNC Software. “APM is looking to recreate a waterwheel, and we are honored to help reproduce it with Mastercam. Exhibits like this are intended to spark imaginations and inspire younger generations to get involved with manufacturing. We are 100% behind that.”

“Using advanced manufacturing methods to recreate an 1846 device is a great way for us to demonstrate how manufacturing continues to evolve,” said Steve Dalessio, Executive Director of APM. “We’re so grateful to Mastercam for creating this model for us, because our education program will be able to use the exhibit to link science, history, and manufacturing.”

The new display will be unveiled for Manufacturing Day 2020.