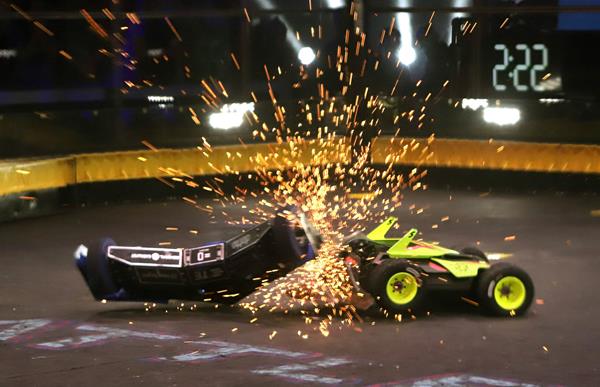 Valkyrie and Hypershock facing off in a fight in the first episode of BattleBots 2019. Image courtesy of Markforged.

Markforged announces that four of its 3D printers will be featured on BattleBots, a television series premiering on June 7 on the Discovery Channel and June 12 on the Science Channel.

As reportedly the only 3D printer company hosted by BattleBots during filming, Markforged produced more than 160 parts for 29 teams onsite—all within the two weeks of filming. The printers allowed the teams to rapidly repair damaged robots, improve their performance during battles and optimize their design against competitors in real time.

BattleBots is a television series where teams design, build and operate remote-controlled machines that fight in an elimination tournament. With strict robot weight limits, Markforged 3D printers gave contestants the ability to create tough custom parts with the strength of aluminum at half the weight.

“Teams with broken bots were saved and able to fight again because of Markforged and their fantastic 3D printers,” says Greg Munson, founder and executive producer of BattleBots Inc. “In addition, Markforged created custom shock mounts for many robot motors. This decreased the fail rate of motors that were poorly mounted, and increased the reliability and the excitement level for the 2019 fights. We can’t thank them enough.”

Markforged printers were used for end-use parts on the robots during filming, though several teams leveraged Markforged during the build season before filming. They produced tooling and fixtures during development, as well as prototypes for their designs.

Three teams that will be fighting in the first episode of BattleBots heavily leveraged Markforged printers:

Valkyrie, an undercutter robot that’s designed to damage the undercarriage of robots, has 55 parts printed from Markforged.

“We produced more than 200 Markforged 3D printed parts for Valkyrie in preparation for this season,” says Leanne Cushing, captain of the Valkyrie team. “With a two-month build time and Markforged as a resource, we were able to bring our improved 2019 design to life effortlessly without the hours and expense of a normal machine shop.”

“Onyx parts provided us with cost savings, weight savings, and design flexibility you just can't get with any other manufacturing process — all while maintaining the performance we need in the BattleBox,” Will Bales, HyperShock captain, says. “When we found weak points in our design during the competition, we printed improved parts onsite. Making your robot better on the fly is a major competitive advantage that can only be achieved with Markforged machines.”

Quantum, a crusher robot that chomps down on competitors with 35,000 lbs of force, printed 21 Markforged parts for their robot.

“Creating Quantum was a very ambitious project,” James Cooper, captain of the Quantum team, says. “To make it happen it was imperative to design super lightweight parts while maintaining high strength in the critical areas. The Markforged Mark Two 3D printer helped make Quantum possible by replacing machined aluminum parts for continuous fiber printed parts. The reliability of the end prints also gave us peace of mind when working to impossible time restrictions.”