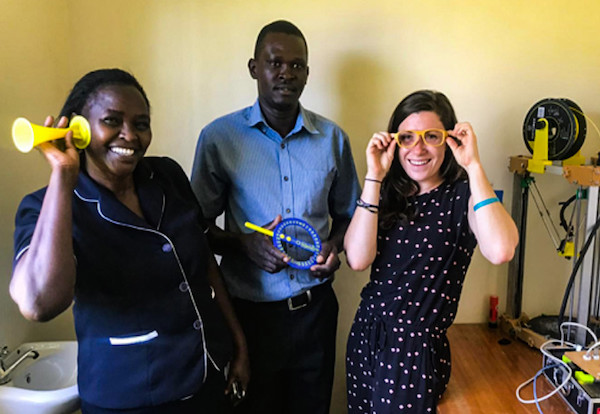 Kijenzi engineer Alenna Beroza, right, displays 3D-printed parts designed with and for nurse/administrator Jennifer Simani and biomedical engineer Daniel Obego. Beroza has been working in Kombewa District Hospital in Kenya to develop and test parts with local professionals and Kijenzi engineers in the U.S. Image courtesy of Kijenzi.

Kijenzi was originally formed to create a mobile 3D printer that could be used to quickly produce equipment like braces, clamps and vacuum pumps at remote hospitals in Kenya. The founders learned, however, that a bigger pain point was the lack of access to CAD files, so they have developed a cloud-based system that provides hospitals with access to files along with training on how to 3D print parts.

“Our customers are healthcare facilities that don’t have access to the supply chains they need and over 40% don’t have the equipment needed to treat their patients. We bring the ability to locally manufacture what they need, when they need it. That is a game changer for access to treatment,” said John K. Gershenson, director of the Penn State Humanitarian Engineering and Social Entrepreneurship (HESE) program and the co-founder of Kijenzi. Gershenson launched the project with co-founder Benjamin Savonen, a doctoral candidate in mechanical engineering.

Hospitals in rural Kenya often struggle to get repair parts for equipment, as well as a long and costly medical supply chain. Kijenzi can help eliminate these challenges in obtaining parts and supplies, while also reducing costs.

According to Penn State, the Kijenzi system has already received requests for nearly 400 different parts, and plans to launch its initial program in Kenya in May 2019.