How a small engineering team evolved from its traditional product design roots to embrace the complexity that comes with smart, connected products.

How a small engineering team evolved from its traditional product design roots to embrace the complexity that comes with smart, connected products. 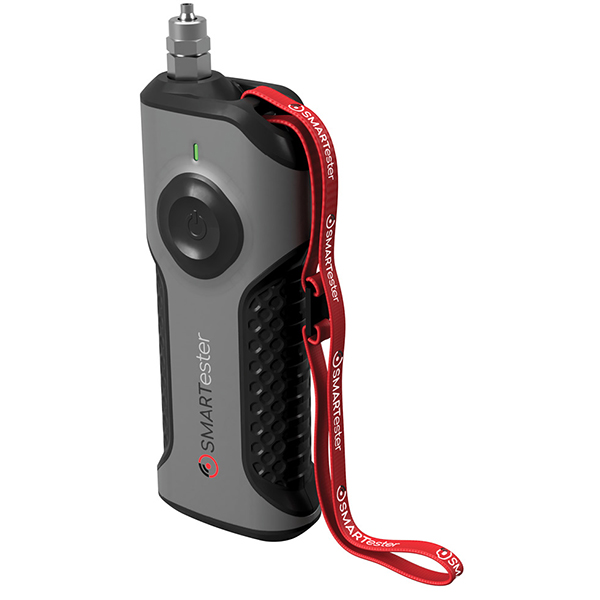 A gas pressure gauge can potentially be a life-saving device, but it’s hardly a poster child for modern-day innovation. That is, until a small engineering team from Steve Vick International decided to embrace the challenge as part of its cast iron gas main replacement business. To complement its industrial service, the team rolled out a wireless gas pressure gauge that couples a mobile app and searchable cloud repository to replace old-school manual processes while simplifying in-field testing and traceability.

Like many mid-size industrial companies and discrete manufacturers, Steve Vick’s product line skewed toward the conventional, comprising a portfolio of fabricated steel components that didn’t have many moving parts, let alone incorporate electronics or software.

After the United Kingdom’s government released a series of new regulations on the heels of a gas leak-induced house explosion, Steve Vick partnered with Wales & West Utilities to design and develop a system that would provide solid evidence and traceability for pressure tests and certification.

Although sensors, software and a cloud-based repository were outside the Steve Vick team’s engineering wheelhouse, the company knew it needed to push boundaries and embrace a smart, connected product paradigm to achieve its core objectives.

“We made a muted attempt at a [pressure gauge] previously and without the app, it was essentially a plastic lump with buttons—it never got off the drawing board,” says Matt MacLennan, mechanical design engineer at Steve Vick, who oversaw the project.

Industrial companies of all stripes are finding themselves in a similar scenario: Discerning how to enhance old-school, non-connected products with modern innovations like connectivity, companion apps and built-in intelligence.

Though large companies typically have dedicated teams and plenty of multidisciplinary talent on board to pursue smart, connected product strategies, small and mid-size players like Steve Vick face an uphill battle when pursuing innovation. 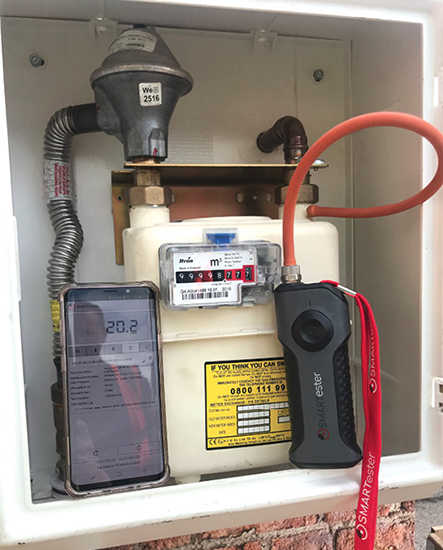 The SMARTester gauge and app records each step of a pressure test and sends it to a cloud dashboard where data can be searched and traceability maintained. Image courtesy of Steve Vick International.

“The key challenge is it’s complicated and expensive, and companies have to juggle priorities, including maintaining their existing products while trying to bring smarter, more connected offerings to market,” notes Charlie Candy, senior manager for go-to-market strategy for design at Autodesk. “And it’s not just about innovating one of your existing products or launching a new one. It’s also a new business model, which means there’s quite a lot of complexity.”

Out of the Rubble

For years, Steve Vick customers doing gas main upgrades used old-school water gauges to test the new infrastructure for leaks. The process was highly manual and time-consuming. Even more problematic was the fact that there was no formal mechanism for recordkeeping, shifting the onus to in-field workers to maintain hand-written paperwork recording the results and confirming that the new gas lines were properly surveyed for possible leaks.

A new wave of digital pressure testers entered the market over the years, modernizing much of the workflow. However, this new gauge category still lacked digital recordkeeping capabilities, maintaining reliance on hand-written documents and making it more difficult to prove compliance with new government safety regulations, MacLennan explains.

“The early genesis for [SMARTester] came out of the rubble of some bloke’s house,” he recalls. “We needed to provide a way of recording and documenting the pressure and saving the data in a way that was quick, easy to find and use, and that couldn’t be falsified.”

The ergonomics of the SMARTester presented some design challenges given that Steve Vick engineers didn’t have deep design experience in handheld tools. There was a lot of usability exploration to determine the proper feel of the plastic enclosure and more importantly, what users would expect in terms of delivering feedback, according to Sam Street, technical designer for Steve Vick. “Our first version was incredibly complicated with LCD displays and loads of LEDs,” he says. “We got caught up in the mechanical side of the product. We were happy designing things with dimensions, but not as comfortable talking through systems that needed to be integrated. That was new for us.”

The novelty of the mechanical design challenge was far eclipsed by the complexity of adding software and electronic components to the SMARTester gauge, MacLennan says. One of the biggest requirements was data capture and the ability to demonstrate compliance with the test procedures. Adding a cloud component, a mobile app and smart Internet of Things (IoT) connectivity to the wireless gauge seemed like the most forward-thinking way to go, yet neither Mac-Lennan nor any of the other engineers in Steve Vick’s small team had software development experience; they only had limited knowledge of electronics.

“Before we got started, the idea of a person laying down a gas mainline having a touchscreen cellphone was a cultural leap,” Street recalls. “A couple of years later, they all had iPhones so it was completely normal that that should become part of the design spec.” 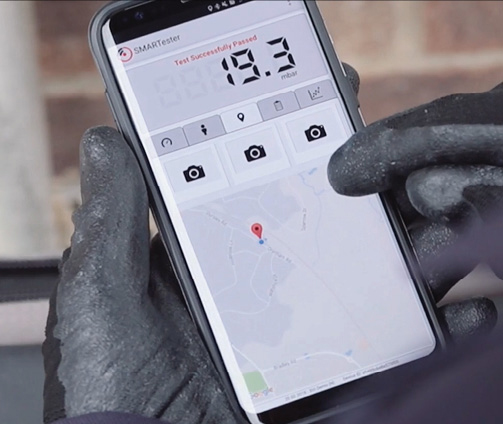 The SMARTester app, which captures information such as time, date, GPS locations and photos, was one of the more challenging aspects of the new product design. Image courtesy of Steve Vick International.

Using a bit of DIY ingenuity, MacLennan spent time researching how to get started—eventually tapping into the Arduino open-source electronics platform and re-engineering apps sourced from the internet to begin the first wave of prototypes. When he started down the path three years ago, there was little support for Bluetooth low-energy in the U.K., he says, and very little resources to pull from for creating IoT products. He quickly found himself in completely new design territory. “Most of the stuff we design, we 3D print, put the prototype on the table and discuss—this was the first time I came up empty-handed,” MacLennan says.

Although the Steve Vick engineering team was already a big proponent of 3D modeling and simulation, it quickly realized it needed additional tools in areas like collaboration and configuration management to get the job done. A switch from Autodesk Inventor to the cloud-based Fusion 360 allowed the design team to share feedback and conduct design reviews with an extended external team, including its Wales & West utility partner. They were also able to leverage the Live Review feature to collaborate simultaneously in a standard web browser with design partners who were using SolidWorks.

Collaboration is proving to be the biggest challenge for companies in the throes of executing their digital product strategy, notes Autodesk’s Candy. An informal survey of manufacturing executives attending the firm’s innovation workshops ranked collaboration as the area most aligned with their business needs. The group, asked to invest 100 units of virtual currency in their top-ranked technology area, awarded 29% of that investment to collaboration compared to 21% customer experience, 19% flexible manufacturing, 16% mass customization and 15% product-as-a-service.

“The biggest problem businesses face is collaboration, working inside the business across different disciplines or in a lot of cases with connected products, incorporating software and electronics coming from outside suppliers,” he explains.

“It’s not such a great leap between what you do know and what you don’t know, and there are plenty of people out there willing to help bridge that gap.”

In addition, different disciplines use different tools, further complicating collaboration and data sharing. “It can stifle the product development process if you can’t innovate quickly and do things in parallel,” Candy says. “A platform brings everything together so you don’t get breaks in intelligence in the model.”

With collaboration and data management requirements in mind, Autodesk Fusion Lifecycle, the cloud-based product lifecycle management (PLM) management tool, became one of the more important additions to Steve Vick’s design tool portfolio. As the company got closer to commercializing the SMARTester offering, it realized that clients wanted different versions, with different app features depending on their use case.

By leveraging the platform’s support for the RESTful application programming interface, Steve Vick parlayed Fusion Lifecycle into a configuration management system, and used it to assemble a specified shopping list of software features that was customized for clients’ needs and downloaded to their accompanying SMARTester mobile app.

“I was familiar with configuration management systems built around a bill of materials (BOM) and I realized an app was no different,” says MacLennan. “It’s just another product made up from components.”

The SMARTester device, which made its debut last year, is gaining traction as a simpler, more accurate way to report live pressure tests back to a database. The mobile app guides the user through testing and documentation processes, allowing them to choose from a menu of tests and add the data to the test certificate along with a photograph of the meter location and precise positional information captured through use of the phone’s GPS. The cloud dashboard displays monthly statistics and workforce analytics, providing more transparency and accountability.

Although the development effort required both Steve Vick management and engineering to take a leap of faith, the exercise was rewarding to the company, given the SMARTester’s positive reception. Despite the pain of the transition, both MacLennan and Street advocate traditional engineering organizations to stretch their wings and embrace the smart product design challenge.

“Don’t let your own lack of skills stop you from going down a particular route because you probably understand more than you think you do,” Street says. “It’s not such a great leap between what you do know and what you don’t know, and there are plenty of people out there willing to help bridge that gap.”