Additive manufacturing comes to the rescue in earthquake, tsunami and even war.

Additive manufacturing comes to the rescue in earthquake, tsunami and even war.

Hyundai uses a mix of generative design and 3D printing to develop Elevate, a concept car for search and rescue. Image courtesy of Hyundai and Autodesk.

Improve Structural Performance of Products
Product developers are under pressure to develop and deliver innovative new products in shorter amounts...

Technology Focus: Simulation and Design Software Innovations
In this Special Focus Issue, we take a look at new features and functions in design and simulation...
Design Resources

In the early days of the pandemic, 3D-printed face shields and ventilator components grabbed the spotlight in the media, revealing the technology’s potential to swiftly respond to unforeseen disasters.

But this isn’t necessarily a new use case of additive manufacturing (AM). Over the course of the technology’s adoption, 3D printing hardware and materials have gained traction in regions of earthquakes, conflict and a variety of natural disasters.

Eric James, executive director of Field Ready, occasionally flew with a 3D printer as part of his allowable carry-on luggage. Over the years, he had to figure out how to fit a 3D printer into a commercial jet’s overhead bin and how to operate it in war-torn, disaster-hit regions where electricity and high-speed internet connection are not always guaranteed.

In the summer of 2012, he decided to take a break from his humanitarian projects. His vacation destination happened to be Mountain View, CA, in the heart of the Silicon Valley. This was his introduction to 3D printing.

“That’s when I realized there’s an opportunity to do something meaningful here,” he recalls. “How could I use this technology to make things that are useful in a refugee camp for example?”

That became the central tenet of Field Ready. The organization’s emphasis is in local manufacturing—using locally available talent and raw materials for humanitarian needs. Over the years, as he and his team race across Nepal, Syria, Iraq and more to save and rebuild lives, 3D printing became an integral part of their strategy.

The MacGyver in War Zones

Fast Company magazine describes Field Ready as “the MacGyver of tough problems in war zones” in an article. In the aftermath of Haiti’s 2010 earthquake, James and his team found themselves printing batches of umbilical-cord clamps for the local hospitals on-premises.

“You can learn to print things in an afternoon. Then the rest is entirely up to you and your ingenuity. On the same day, you may print something to fit a pipe or repair a medical device, or a toy to encourage children to wash their hands with soap,” James says.

During the recruitment process, Field Ready looks for those with 3D modeling skills to take advantage of AM. The organization has also developed a catalog of ready-to-print parts that range from a trickle-water filter and air dehumidifier to scalpel-truss handles, each illustrated with a CAD model and marked with the appropriate material type for printing. The latest catalog lists 133 items.

At the same time, the team develops the necessary skills in the local population as part of its capacity building that allows others to continue using the technology for the long haul.

“We have a thriving program in Iraq to support local maker spaces,” says James.

One of Field Ready’s first hires in Nepal, James recalls, “had studied 3D printing in university as an engineering student but had never used it in real life. It was only when he joined us that he was able to use it for real.”

Portability, affordability and durability often determine what printer Field Ready would use. The team has used machines from MakerBot, Ultimaker and Formlabs, among others.

“It benefits us to have a number of similar machines, so we can reuse the same spare parts, materials and expertise for our projects,” James says.

James recognizes big-name printer makers likely devote most of their resources to supporting automotive and aerospace customers—an economic reality. However, he hopes they also consider the needs of niche users like Field Readyin their hardware designs.

Equipping all 3D printers with Wi-Fi and web connectivity is fine, but requiring a software download as part of the setup, James points out, could be quite a hassle in certain parts of the world.

“With one of our brand-new machines, we had to bring it from the field to a nearby hotel with internet connection to be able to set it up,” he recalls. On behalf of those trying to print critical parts in the frontiers of humanitarian works, James says, “Make them easier to use, and don’t assume all your users have 24/7 web connectivity.”

Naoto Kan, Prime Minister of Japan at the time, said, “In the 65 years after the end of World War II, this is the toughest and the most difficult crisis for Japan” (“Anxiety in Japan grows as death toll steadily climbs,” CNN, March 2011).

At the time, Ogasawara and Kumeda were 15-year-old students with an interest in robotics. They had won the Fighting Spirit Prize at the National High School Programming Contest with a smartphone-controlled robot; they also earned seventh place in the RoboCupJunior Japan Open rescue division.

In discerning how to apply their talent to help the country, Ogasawara and Kumeda formed Team ROK as students at the National College of Technology. Their brainchild was X VEIN, a search-and-rescue drone, which made its public debut at Maker Fair Tokyo 2016. 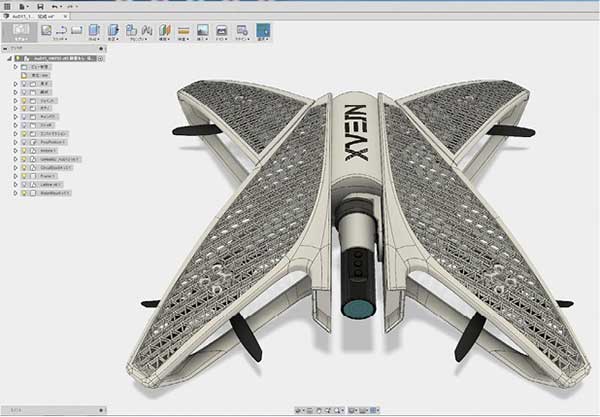 Winged for the Future

“Most parts in X VEIN were printed with a 3D printer, except the electronics component such as the cameras, motors and PCBs [printed circuit boards],” Ogasawara says. “I chose nylon plastic (PA 12) for its material. SLS [selective laser sintering] was the method we used to print in the nylon material as it’s suitable for very complex structures like X VEIN, and there was no need to use support material.”

Ogasawara and his co-creator Kumeda used Autodesk Fusion 360 and applied generative design to keep the drone as light as possible for aerodynamics.

“For a drone to hover in midair, the lift it generates must exactly match its own weight,” explains Ogasawara. “Variations of even 5% of overall weight change how operators must control the drone. It is crucial we make our drone as light as possible.”

Because of Japan’s strict laws governing the use of unmanned aerial vehicles, X VEIN didn’t get to prove its potential in actual rescue missions.

“Looking at examples of the latest drones, there is no other example of an aircraft that has a propeller coverage area as large as that of the X VEIN, while keeping the aircraft compact,” observes Ogasawara.

Team ROK never intended X VEIN to be a commercial product, so it was never mass-produced. Ogasawara still hopes, with local government approval and support, he may one day get the chance to send X VEIN on a real mission.

John Suh, VP and founding director of New Horizons Studio, Hyundai Motor Company, thinks cars should have not only wheels but also legs—that is, if it’s intended for search and rescue. The studio he runs launched in September 2020 with the goal “to create the world’s first transformer-class vehicle, also known as the Ultimate Mobility Vehicle,” he says.

He recently presented his concept car at Autodesk University (AU) Virtual 2020, an online version of the annual Autodesk user conference. The futuristic off-road vehicle he and his team came up with is called Elevate.

“It can overcome obstacles, cross gaps and go where even off-road vehicles will have a difficult time going,” Suh says.

“The software forced us to look at different manufacturing processes—3D printing versus cast-magnesium,” says David Byron, manager of Design & Innovation Strategy from the Elevate project partner Sundberg-Ferar. “There are different cost factors, strength and performance considerations.”

Generative design was a good fit for the project because “it changes my mentality from subtractive method to growing mentality. It’s a different way of creating a sculpture,” Byron adds.

In an interview with the press, Suh revealed, “the structural elements of the next generation legs for Elevate are under Generative Design study.” He believes Elevate can be deployed in resource delivery, search-and-rescue missions and even lunar exploration.

The project involves the use of lattice structures, additive manufacturing and multidisciplinary collaboration, facilitated in Autodesk Fusion 360.

“Generative design allowed us to tackle a lot of complex problems that would have taken somebody a long time to solve manually,” Suh says. “I call it a mind multiplier.”