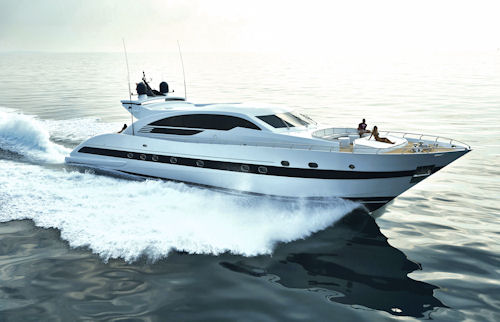 While it’s widely recognized that HTC smartphones, Garmin GPS devices and a sweeping array of big-brand laptops are staples of the Made in Taiwan (MIT) effort, it’s a lesser-known fact that luxury yachts (those measuring 80 to 120 ft.) are a booming business in Taiwan. The country is now sailing port-side with market leaders like the United States, Italy, The Netherlands and Germany. Producing high-quality boats at comparatively low prices, Taiwan’s luxury yacht industry reached a peak in 1987, with the country exporting 1,755 vessels for an export value of more than $190 million. But rising labor costs and the appreciation of the Taiwanese dollar took its toll over the years, and the industry had to weather its share of storms.

These days, Taiwan’s luxury yacht sector is back on course—with the country surpassing Germany as the sixth-largest yacht maker last year, according to yachting magazine ShowBoats International.

One such plan is the construction of a dedicated yacht-building precinct as part of the Kaohsiung Port City Reconstruction project. On the technology and manufacturing front, industry players are promoting the use of CAE and advanced simulation to foster innovation among Taiwanese yacht makers, while helping them decrease overall cycle times.

“While many yacht companies, shipyards and naval architects have adopted Dassault Systemes’ CATIA application in the last three years, the value of numerical simulation and the concept of digital design evaluation are still not broadly promoted in Taiwan,” notes Ray Tsai, technical director of Simutech Solution Corp., which provides consulting services for Dassault Systemes’ SIMULIA application. “Lots of yacht companies don’t know there is a powerful tool that could immensely improve their design, with shorter cycles and better systems integration.”

Tsai, together with colleagues Rey-Yie Fong of Tiny Machine and Mechanics Laboratory, and Chia-Chuan O and Yu-Chieh Lin, both deputy engineers with the Ship and Ocean Industries R&D Center in Taipei, have mapped out a route intended to demonstrate just what’s possible with SIMULIA’s realistic simulation toolkit. Detailed discussions with Taiwanese yacht manufacturers revealed a glaring hole in the development process: Most of them outsource the upfront design of their boats to foreign partners.

“Often, they don’t have the tools or the expertise to design a structure from scratch, let alone optimize a hull structure with composite layouts, or even modify subsequent concepts to increase performance,” Tsai explains.

With mounting global competition around styling and price, it makes sense that Taiwanese yacht makers could command a greater edge by bringing more of the design process in-house. Manufacturers are increasingly under the gun to respond to customers’ demands as quickly as possible, while still keeping costs low.

They also need to strike that proverbial balance between aesthetically pleasing style and delivering a range of competitive on-board features and performance. Technical challenges in the areas of design proficiency, manufacturing cost, and quality control have long been barriers for Taiwanese companies looking to maintain their competitive strength against rivals (see Fig. 2).

Simulation technology provides yacht makers with a deeper understanding of their designs from the start, allowing them to iterate incrementally far earlier in the cycle—while also tracing problems during every stage of the development process. “We wanted to help them move iterating cycles from the manufacturing stage to the design stage, so that the performance criteria could be evaluated earlier when it costs less to modify,” Tsai explains.

“These three areas were most frequently encountered by designers, manufacturers and customers,” Tsai says. “They were struggling with how to achieve the optimal intrinsic strength and stiffness in their designs, along with cabin ventilation efficiency and navigating the tradeoffs around static structure performance and dynamic wave slamming impact. Sometimes the key to orchestrating a design leap is there, but hiding within another configuration. What we wanted to do is to dig it out with different examinations.”

The partners set out to prove their case, taking advantage of the extensive SIMULIA application portfolio based on Abaqus Finite Element Analysis (FEA). Abaqus/Standard, together with Simulayt, was tapped for composite structure layup analysis and manufacturing process management; Abaqus Computation Fluid Dynamics (CFD) came into play for ventilation and thermal analysis; and Abaqus/Explicit was used for Coupled Eulerian-Lagrangian (CEL) analysis, which is central to slamming wave impact simulation.

Having an integrated interface between the CAD tool—in this case, Dassault Systemes’ CATIA—and the different CAE functions that leverage Abaqus and Simulayt is critical, Tsai says, so users don’t have to change tools or deal with cumbersome data import procedures (see Fig. 3).

“The concept of integrating structural analysis within the design process benefits complex design projects immensely,” he explains. “We are able to import geometry from CATIA and use Simulayt with the composite modeler for Abaqus [CMA] to analyze composite layups. We were also able to reuse the same models for CFD simulation, and material properties and conditions could be shared between models without duplication.”

Fong chose a 70-ft. Monte Carlo yacht to serve as a benchmark for the simulations, since it is the median size for Taiwan’s yacht industry and because the specifications of the model mapped pretty closely to the proprietary specifications of most manufacturers.

Applying simulation to the modeling and manufacture of structures made from fiber-reinforced materials is one of the areas where CAE in luxury yacht design can shine. With all eyes on fuel efficiency and performance, the use of composite materials is exploding in the aerospace and automotive sectors—in part because of strict sensitivity to weight demands. While yacht design shares many of the same engineering techniques as the two other sectors—for example, numerical methods, materials selection, system integration and multi-body mechanics—in Taiwan, the concept of lightweight structure design is far less mature. There is long road ahead for shipbuilders to break out of conservative design stereotypes.

Abaqus CMA provides flexible modeling strategies for the quick evaluation of geometry and meshing at both the preliminary and final design stages. With its precise geometry definition, CATIA Composites comes into play at the detailed design stage, helping to optimize design for manufacturability. CATIA generates the composite layup patterns, which can then be assigned to Abaqus with specified material properties and fiber orientation. An interface connects CATIA Composite and Abaqus CMA with automatic data transfer, eliminating the possibility of typos and tedious property assignments layer by layer.

The Simulayt tool helps designers and engineers simulate the forces on a composite structure during manufacturing, rounding out the analysis by predicting plant-floor issues that can be mitigated earlier in the development cycle—and helping to meet production timeframes within budget (see Fig. 4).

Tsai’s team also applied simulation tools to the design challenge around yacht ventilation. The goal of the exercise was to understand the conduction-convection heat transfer phenomenon, allowing an engineering team to zero in on the optimal ventilation system specification and vent arrangement that would minimize the compressor requirement.

“The challenge is to decide how to arrange the inlet and outlet vents to provide a uniform cooling status in all the cabins,” Lin and O explain. Passive vents use a convection effort to circulate air; they work well on nice breezy days, but on hot, still days, they are not as effective.

Active vents include a powered fan and apply a conduction effect. “We set a target that we wanted to unify the temperature distribution and utilize the convection effect to transfer cool air from the upper deck to the lower deck as much as possible,” Lin adds. “The CFD visualizations presented a clear image of the air flow along the cabins, so we could come up with a concept to improve the arrangement of the vents and design a more comfortable yacht.” (See Fig. 5.)

The third area where simulation was applied was evaluating the performance of a yacht design under impact from waves, or other scenarios that might test its buoyancy and maneuverability (see Fig. 6).

Using Abaqus CEL, the team was able to simulate the yacht design’s transient and non-linear varying response to wave impact conditions, as well as different turning maneuvers. Reaction force, reaction moment, displacement, velocity and acceleration are recorded on the mass center of the yacht to examine the dynamic performance over time. Slamming contact pressure on the hull is also output to determine the structure loading under transient impact.

More widespread use of these advanced simulation methodologies will help Taiwanese yacht makers have a better chance of sailing past the competition, Tsai says.

“Simulation can help them innovate designs faster while keeping costs in check,” he continues. “To build a faster, lighter and more luxurious yacht is a challenge, trying to find that compromise between different design considerations. We believe Taiwanese yacht makers will be more competitive in the global market if they are capable of handling more of the design by themselves.”