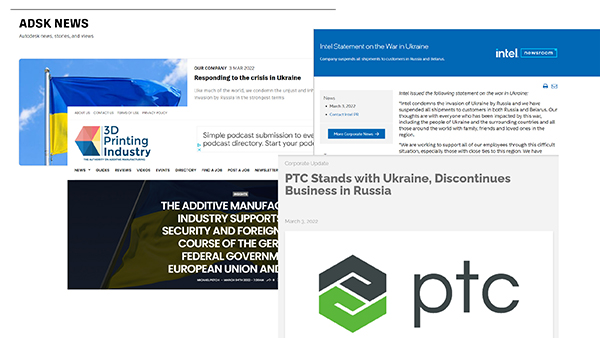 As international condemnation of Russia's attack on Ukraine grew, the foreign businesses' exodus from Russia also sped up.

On March 3, a week after Russia launched its military operations against its neighbor, Autodesk announced it is suspending business in Russia. It stated, “Amid the shock and sadness of this crisis, we’re drawing a sense of pride and inspiration from seeing people all over the world rally to support those affected. This includes the many Autodesk employees who are giving their time and resources to help in any way they can—from donating to humanitarian organizations aiding Ukraine to raising their voices in protest of the Russian invasion or volunteering to find housing for refugees fleeing the conflict.”

Like much of the world, we are shocked and saddened by the crisis unfolding in Ukraine. Here's how Autodesk is responding: https://t.co/acHg2NXVhu.

The Autodesk Foundation, the company's charitable arm, also plans to contribute financial support to the growing refugee crisis. This includes a 2:1 march for its employees' donations to the designated relief organizations, such as Nova Ukraine.

PTC, known for its Creo product suite, also published its position on March 3. “PTC stands with the Ukrainian people and condemns the Russian invasion of Ukraine in the strongest possible terms. In response to this unprovoked invasion, which continues to result in unnecessary loss of life and has forced so many Ukrainians to flee their homes and seek safety, PTC will discontinue all business operations and sales in Russia. At this critical moment, the human impact of this tragedy needs to be front and center. PTC, through its foundation, will donate $1 million to support humanitarian efforts for the Ukrainian people. PTC joins all those around the world calling for peace and the fastest possible end to this conflict,” the company said.

German-owned Siemens, the parent company of Siemens Digital Industries, is also suspending its operations in Russia. German news outlet Deutsche Welle (DW) said, “Russia accounts for just 1% of Siemens' global sales but the company has had a presence in the country for 170 years and Russia once accounted for the vast majority of its business. It employs several thousand people in Russia.”

Competing chipmakers Intel, AMD, and NVIDIA found themselves on the same side, all deciding to stop sales in Russia. Intel wrote, “Intel condemns the invasion of Ukraine by Russia and we have suspended all shipments to customers in both Russia and Belarus [Russia's ally in the attack on Ukraine] ... We are working to support all of our employees through this difficult situation, especially those with close ties to this region. We have launched an employee donation and matching campaign through the Intel Foundation that has already raised over $1.2 million for relief efforts, and we are proud of the work our teams in surrounding areas including Poland, Germany and Romania are doing to aid refugees.”

NVIDIA didn't publicly make an announcement, but revealed its decision to PC Mag. On March 22, when NVIDIA CEO Jensen Huang delivers his keynote to the GTC Spring 2022 Conference attendees, he may need to address it more explicitly.

Rival US workstation makers Dell and HP have both joined the hardware makers suspending sales and shipment to Russia. At least for now, China-owned Lenovo has not made announcements about its future in the Russian market, according to Reuters.

AM Leaders Issue Statement on Invasion

Soon after the invasion, Poland-based Zortax promptly stopped its partnership talk with the Russian AM firm Rusatom. Big names in the additive manufacturing industry also published a jointed statement, titled “Together We Are Strong.” It read, “It is with great concern that we look at the current situation and express our solidarity with all people affected by the war, who deserve any possible support. For this reason, we have decided to suspend all business activities in the Russian Federation until further notice.” Signatories include Stratasys, 3D Systems, EOS, Nano Dimension, Materialise, and Wohlers Associates.

The product design segment's rebuke is part of the larger international business community's response, driven both by the government-imposed sanctions and the desire to distance themselves from Russia. Aerospace giants Boeing and Airbus have both halted supplies to Russia. Automakers Ford, GM, and Volkswagen have stopped sales and operations in Russia. With imminent supply chain disruptions across Europe, international manufacturing will likely be grappling the impact of the war for years to come.

The impact of the Russia-Ukraine conflict is tragic. To show our support, we have joined the Additive Manufacturing Community in solidarity with Ukraine. #standwithukraine #reponsiblemanufacturing #togetherwearestrong pic.twitter.com/QCIwDfeZZ2

Dassault Systèmes has suspended all new business in Russia and Belarus, effective beginning March 9. In a statement, the company reported, “We may maintain some minimal support activities for our existing customers who are not subject to sanctions, and will continue complying with all applicable export control restrictions and sanctions laws relevant to our operations as well as with the rules of ethics and international standards. We will provide the necessary support for our colleagues in Russia throughout the implementation of this plan.”

Effects of Sanctions on Russia

As governments worldwide issue sanctions on Russia to publicly condemn the Ukraine invasion, there is an immediate effect on tech imports, leading to marked increases in CPU prices in Russia in recent days.

For instance, in early March the United States, United Kingdom and European Union all unveiled limits on exports to Russia that ranged from microelectronics and sensors to navigation equipment and aircraft components. Companies planning to ship these items to Russia must now seek a license managed by the U.S. government, with each application evaluated under a presumption of denial. Exports such as those mentioned here must be able to address humanitarian needs, safety of flight, or other necessary functions, according to a report by ExtremeTech.