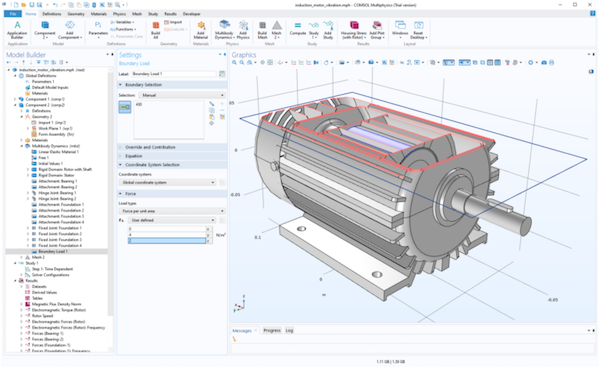 An electric motor simulation in COMSOL Multiphysics version 5.6 where a clip plane is used for easier access to the inside of the model for assigning material properties and loads. Image courtesy of COMSOL. 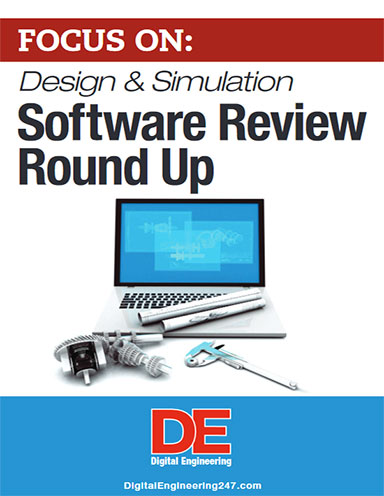 Design & Simulation Software Review Round Up
We’ve compiled some of our most popular design and simulation software reviews in this...
Sponsored Content 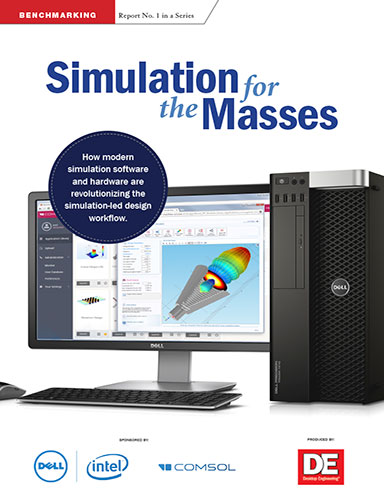 Benchmarking Report 1: Simulation for the Masses
Modern simulation software and hardware are revolutionizing the simulation-led design workflow. Benchmarks reveal up to...

Graphics enhancements include an update for clip plans that enables easier selection of boundaries and domains inside of complex CAD models. Other graphics improvements include visualizations that are partly opaque and partly transparent; realistic material rendering; and the ability to make imported images part of a visualization.

“When our customers launch CAD models, they often have multiple layers of complexity,” says  Bjorn Sjodin, vice president of product management at COMSOL. “They may need to see inside. Many of our commercial customers have been asking for the ability to click away part of a model by sliding a click plane through the geometry. It is a small change, but provides a dramatic usability improvement.”

The big news, however, is a significant improvement in solver times. According to COMSOL, the solution time has decreased by 30% or more for many types of simulations. The solvers are more efficient with respect to computation time and memory usage for multicore and cluster computations. Handling of larger CAD assemblies has also been improved.

“We have a lot of users that are leveraging larger, industrial-sized models,” Sjodin, says. “We have commercial users going to CAD assemblies and trying to solve the physics them. Many of our customers are large organizations using clusters, and to get speed-up on clusters for these strongly coupled multiphysics models is a challenge.”

He added that COMSOL has worked to leverage additional CPU compute resources so that its solvers can scale on each node, as well as on the cluster as a whole.

According to COMSOL: “Another improvement for users running on clusters includes an upgraded domain decomposition method that can now be used for a wider range of simulations. For acoustics simulations, a new boundary element method formulation enables analyses of an order of magnitude larger acoustic volumes. For CFD simulations, the solution time on clusters has decreased by about 30% using iterative solvers and about 50% using domain decomposition. A new eigenvalue solver called FEAST, well suited for parallel computations, has several important uses, including mode analysis for optical waveguides and laser cavities. In the Optimization Module, a new general-purpose, gradient-based solver called IPOPT has important applications in, for example, shape optimization.”

The Fuel Cell & Electrolyzer Module provides engineers with modeling and simulation tools for hydrogen fuel cells and water electrolyzers, along with general-purpose tools for realistic fluid flow and electrochemical simulations. According to COMSOL, engineers can include charge transport, electrode reactions, thermodynamics, gas-phase diffusion, porous media flow, and two-phase flow when analyzing and optimizing technology for hydrogen vehicles and energy storage.

The Polymer Flow Module allows engineers to use modeling and simulation to design and optimize processes involving non-Newtonian fluids, for applications in the polymer, food, pharmaceutical, cosmetics, household, and fine chemicals industries. The new module can account for a variety of multiphysics effects, including. when the properties of a fluid vary as a function of temperature and composition, to model curing and polymerization, or when a non-Newtonian fluid affects a mechanical structure, such as for a biological fluid moving through a peristaltic pump, the company says.

The Liquid & Gas Properties Module is used to compute properties for gases, liquids, and mixtures such as density, viscosity, thermal conductivity, and heat capacity as functions of composition, pressure, and temperature.

The Power of Virtual Experiments
COMSOL users from around the world shared their stories with us, and now we are looking forward to sharing their expertise, insight, and innovative ideas with you.
Multiphysics Sparks Innovation in Electronics Design
Multidisciplinary modeling and simulation will play a larger role in solving electronics design challenges.
Simulating a Path to Grid Modernization
As natural disasters, the push for renewables and electrification mount pressure, simulation plays a key role in the U.S. power grid’s redesign and optimization.
Sponsored Content
Making Predictions in Additive Manufacturing with Simulation Apps
Engineers at the Industrial Technology Research Institute built a simulation app that can be used to predict the performance of laser powder bed fusion, an additive manufacturing process. The app saves time and money during the additive manufacturing process for...
A Reality Check for Simulation
Simulation needs test-based validation to be credible.
Optimize or Generate?
Industry insiders explain the difference between the two approaches.
COMSOL Company Profile