Bricsys Makes the Case for Mechanical CAD in DWG 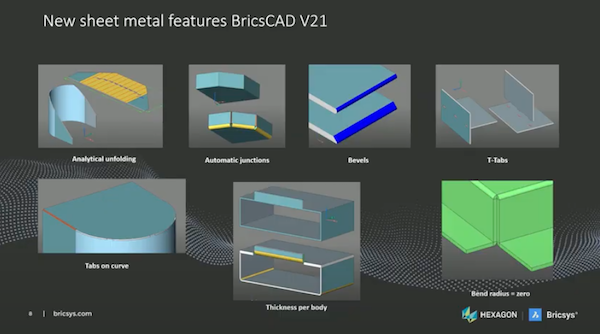 Special Focus: Simulation & Design Software Innovations
In this Special Focus Issue, we take a look at new innovations in design and...
Sponsored Content

Bricsys has spent most of the past two decades building a DWG-based CAD system to serve as an affordable and reliable alternative to Autodesk AutoCAD. On October 27 the Ghent, Belgium company presented their online alternative to an annual in-person conference. Instead of announcing a release to come in the near future, Bricsys presented BricsCAD V21, now shipping. The choreographed message of the conference was one of readiness. In the words of COO Mark Van Den Bergh: “Ready for production…  ready for the future… ready for open collaboration… ready to deliver real ROI.”

“BricsCAD covers almost all of the 3D tools we need,” says Hristo Guentchev, managing director of Prototyp, an international engineering consultancy based in Sofia, Bulgaria, presenting as part of the conference keynote. “Sometimes the 2D path is productive, sometimes it is the 3D path. If you are an engineer used to working in 2D, it is easier to use BricsCAD to start working in 3D than with any other product, because you follow the pattern.”

Japan-based Mazda uses BricsCAD in its production engineering division, for factory design and planning. “Our industry is very innovative, and everything is moving toward 3D,” notes Mazda’s Masahiro Abe, also presenting in the keynote. “Our BricsCAD license can be used for both 2D and 3D. And we can use the same licenses overseas.”

Much of the 4.5 hour presentation covered innovations specific to construction, making a strong case that unrest in the BIM (building information modeling) market works in their favor. At the same time, Bricsys has always prided itself on having a strong hand in mechanical design. Last year Bricsys showed the marriage of BIM and mechanical design. This year it took the innovations a step further, with a demonstration of features using a brewery with a bottling line to show the interplay of mechanics, kinematics, and structure. 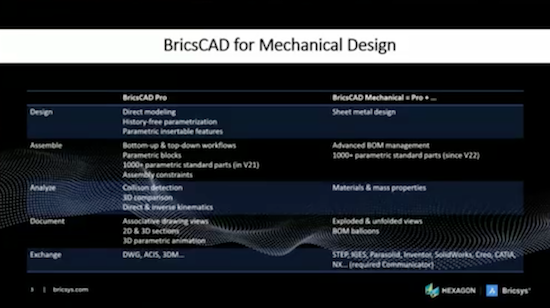 Some commands in BricsCAD V21 are specific to the BricsCAD Mechanical edition, an extension of BricsCAD Pro. Image courtesy of Bricsys.

Bricsys considers DWG an open collaboration environment, thanks in large part to the work of the Open Design Alliance, which creates DWG-compatible SDKs (software development kits) for its members. “We believe in a multi-solution environment,” says Van Den Bergh. In BricsCAD V21 Bricsys introduces support for DWG tessellated data, as used in AutoCAD Mechanical.

Bricsys also distinguishes itself from Autodesk in its licensing schemes. It offers BricsCAD on either a perpetual license or by subscription, based on customer preference. “Companies operating globally can’t make use of forced subscriptions and named user licensing in their operations.”

Robert Green has been a magazine columnist and blogger on the subject of CAD administration for many years. Last year he was introduced as the new Bricsys Director of Implementation. At this year’s conference Green reported on his year of working with companies who have introduced BricsCAD into their work environment or switched to it completely. “CAD managers I work with have discovered ways to easily replace existing CAD systems. Was it hard? No. Was it Long? No. Macros and scripts run as expected. ARX only needs a recompile,” he said.

Christian Lecomte has been with BricsCAD from its earliest days, specializing in its sheet metal utility. In a live demonstration Lecomte created a sheet metal diagram from a solid in less than four minutes, with all bends specified. In a second demonstration Lecomte started with a model already designed in sheets but not prepared for folding. Parametric constraints were added, then flanges and width established. Chamfers were turned into bevels as needed, and T-tabs and junctions were recognized and applied. 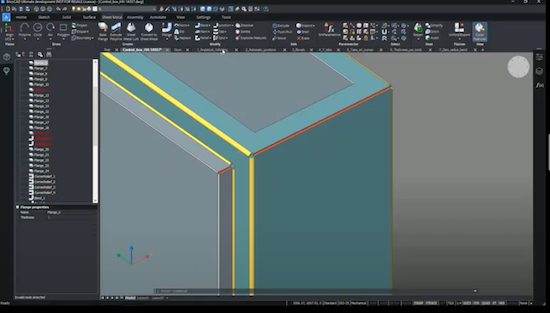 Sheet metal model preparation is just one of many areas in which BricsCAD uses artificial intelligence (AI) routines to streamline routine tasks. Bricsys has integrated AI and machine learning into many drafting features. It also uses AI algorithms to speed the use of LISP routines imported from AutoCAD. Geometric constraints can be added to any part of a drawing or model; constraints are often added as part of a larger automated drafting sequence. Two years ago, a Blockify command was added that converts 2D entities into blocks with one click. In V21 Blockify works with 2D constraints to make blocks parametric. Blockify also creates associative arrays when the software finds repetitive patterns of 2D entities. These can be converted into a block, then edited to make them dynamic (parametric). The resulting block can then be added to the library.

The MCAD pitch from BricsCAD is three-fold: The use of three-dimensional drafting offers a familiar work environment; the use of 3D parametric components (enabled with AI) offers increased productivity; and the use of DWG eliminates file conversion and allows use of millions of existing parts and models.

The BricsCAD product line has been simplified with the release of V21. BricsCAD Classic is renamed as BricsCAD Lite, and is aimed at CAD users who work primarily in 2D. BricsCAD Pro is now the top-of-the-line model, replacing two versions in previous editions. The discipline-specific editions (BricsCAD BIM, BricsCAD Mechanical) are based on the Pro version. An Ultimate version bundles all discipline-specific features.

BricsCAD V21 editions are available directly from Bricsys or selected dealers. It is sold in Windows, Mac, and Linux versions.