CorelCAD 2020: An Alternative to AutoCAD

Corel, known for its flagship, best-selling product—CorelDRAW has steadily added to it's software library. The company acquired design, illustration, photo and video editing applications. Earlier this year, they released CorelCAD 2020, the latest update to its 2D/3D CAD software. 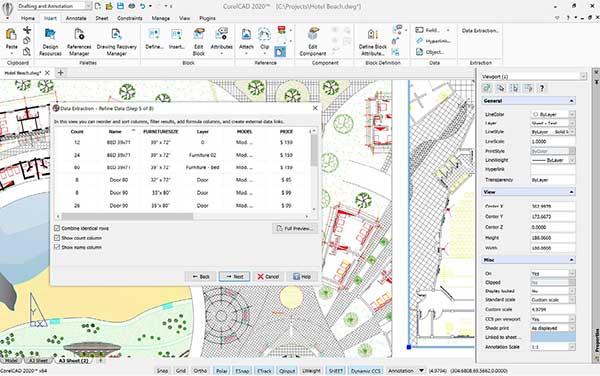 CorelCAD 2020 users can extract attributes and object properties, displaying results as a table in the current drawing or saving data to an external file, but only in the Windows version. Images courtesy of David Cohn.

Back in the day, Corel, a big-name software company in Canada was originally known for its flagship, best-selling product—CorelDRAW. More recently, the company acquired programs in markets such as design, illustration and photo and video editing. Earlier this year, the company released CorelCAD 2020, the ninth version of its 2D/3D CAD software.

CorelCAD is positioned as an affordable alternative to AutoCAD as well as a way to bring CAD tools to users of CorelDRAW. Based on the ARES CAD kernel from German developer Graebert—the same CAD engine that powers Graebert’s own ARES Commander and Dassault Systèmes’ DraftSight software—CorelCAD 2020 uses AutoCAD 2018 DWG as its own native file format. The software is available for Windows and Mac OS as well as mobile versions for Android and iOS devices. The latest edition features improvements to its 2D drawing and 3D modeling tools.

When you first start CorelCAD, the program displays its “Classic” user interface, which includes pull-down menus and a host of toolbars with icon-only buttons docked around the perimeter of the screen, much like very old versions of AutoCAD. But as soon as you switch to the “Drafting and Annotation,” “3D Modeling,” or the new “CAD General” workspace, CorelCAD changes to a ribbon interface quite similar to modern AutoCAD versions. The new release also makes it easier to save your own custom workspaces.

Like AutoCAD, each drawing appears in its own window, identified by a file tab across the top of the drawing area. You can use the drawing file tabs to easily switch between drawings or start a new drawing and use tabs in the lower-left corner of the drawing window to switch between model space and multiple sheets—equivalent to paper space layouts in AutoCAD. 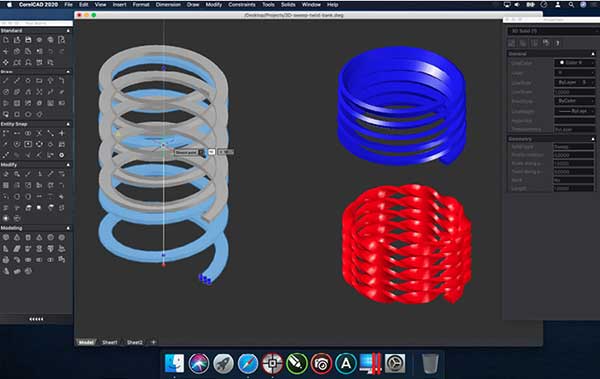 3D modeling enhancements in the Mac and Windows versions make it easy to create shapes that rotate along a specified sweep path.

Other aspects of CorelCAD are remarkably similar to AutoCAD. For example, CorelCAD has a command window and you can start commands by typing, just like AutoCAD. Some commands have different names—such as PATTERN instead of ARRAY—but thanks to command shortcuts (like AutoCAD aliases), you can type the AutoCAD command name to start almost any CorelCAD command.

Although CorelCAD 2020 still does not include every function found in AutoCAD, the list of missing features continues to shrink. For example, the new release adds a Lasso selection tool and the Layer Manager in CorelCAD now has a filter manager that enables users to reference layers together. Both are nearly identical to features that have existed in AutoCAD for many years.

When working in 3D, a new command in CorelCAD 2020 lets you create wireframe geometry from the edges of a specified 3D solid, surface, mesh or region. There is also another new command that offsets 2D entities from the boundary of a 3D solid or surface.

The Sweep command has been enhanced with the addition of a Bank option that lets you apply a consistent angle to a profile as it is swept along a path. Again, these features have long been available in AutoCAD. The rotate, copy and offset tools in CorelCAD have also been enhanced, essentially matching capabilities in AutoCAD.

CorelCAD 2020 also introduces a data extraction wizard that lets you extract attribute data from blocks and property data from entities. You can choose to display the results as a table within the current drawing or save the data to an external file. This long-awaited capability duplicates functionality that has been available in AutoCAD for more than 20 years. Like AutoCAD, however, the data extraction wizard is only available in the Windows version.

After a briefing earlier this year, we were particularly excited to evaluate promised improvements in CorelCAD’s custom block capabilities. Custom blocks, introduced in CorelCAD 2019, are similar to dynamic blocks in AutoCAD.

You create custom blocks in a special block editor environment where you draw geometry, add elements (such as grip points and custom properties) and “activities” to specify how the block changes when you manipulate grip points. Custom blocks in CorelCAD support capabilities very similar to those in AutoCAD, including the ability to define visibility states (so that a single block can have appearance variations) and the ability to control custom blocks using tables.

New in CorelCAD 2020 is a test mode that lets you try out changes you have made to a custom block before saving those changes. In AutoCAD, the block test mode opens within the block editor environment, while in CorelCAD, the block being tested actually opens in a separate drawing tab. Functionally, it is nearly identical to AutoCAD, but in CorelCAD it still feels a bit awkward.

In addition, when working in CorelCAD’s block editor, the tools used to modify custom blocks are not as intuitive as those in AutoCAD, owing largely to user interface (UI) differences between the two programs. For example, AutoCAD provides a block editor contextual ribbon. Because CorelCAD lacks context-sensitive ribbons, the tools for editing custom blocks appear in a collection of icon-only toolbars. The UI lacks tools for entering and exiting the new test mode. Instead, you must type the commands.

During our briefing, we were shown a new CorelCAD capability whereby you could convert an AutoCAD dynamic block into a CorelCAD custom block, which would then retain all of the original dynamic capabilities but would become a CorelCAD custom block. The command is even described in the CorelCAD help file. But when we attempted to use the CBConvert command, the program reported that it was an unrecognized command.

Other Enhancements and Unique Features

Other new features in CorelCAD 2020 include the ability to export PDF files that include layers, the ability to modify the shape of non-associative hatch objects and the ability to control the smoothness of STL files. In addition, CorelCAD has a unique feature that lets you create a new dimension style from an existing dimension that already has the desired style changes.

CorelCAD continues to provide good support for AutoLISP and ARX, and offers some capabilities not found in AutoCAD. For example, you can insert audio recordings into a drawing and then play them back later. Although AutoCAD does not support these Voice Notes, it has no problem opening drawings containing them.

CorelCAD also supports other industry-standard formats, including SVG, ACIS and SAT, enabling users to import files from other CAD programs. You can also import CorelDRAW (CDR) and Corel DESIGNER (DES) files as model space objects and export CorelCAD files to both formats, but only in the Windows version.

At $699 for a perpetual license, CorelCAD is much less expensive than AutoCAD or even AutoCAD LT, which are only available by subscription. You can also upgrade from any previous version of CorelCAD for $199. If you prefer a subscription, however, Corel offers the Mac and Windows versions for $35 per month or $300 per year from the Apple and Windows app stores, respectively.

If you can live without the missing features, its low cost and AutoCAD similarities continue to make CorelCAD an attractive alternative for those on a budget.