The Rodin FZero hypercar will include an 8-speed gearbox produced on a 3D Systems metal printer.

The Rodin FZero hypercar will include an 8-speed gearbox produced on a 3D Systems metal printer. 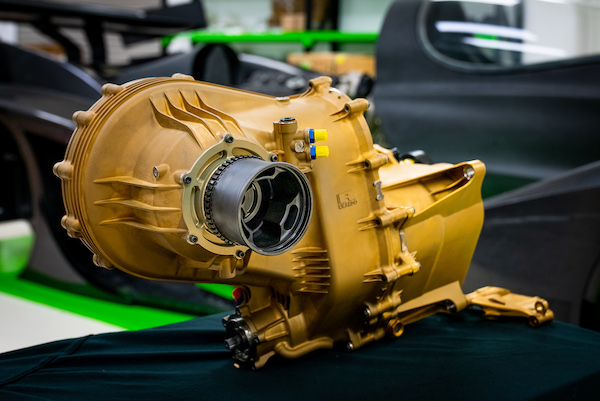 Rodin Cars designs and builds completely bespoke single-seat, open-wheel high-performance vehicles that are designed to be faster than contemporary Formula 1 cars, the company says. Among the hundreds of metal parts that Rodin Cars is additively manufacturing for the Rodin FZero, they are producing a first-of-its-kind 8-speed sequential gearbox with a hydraulically controlled differential. This custom component can only be produced using additive manufacturing and was made possible through the collaboration with 3D Systems.

According to the company, a gearbox created using traditional manufacturing methods would be cast out of Magnesium or machined from billet material. The resulting component would not only be slow to produce, but heavier and would not withstand the rigors presented by the track.

Rodin Cars released their first high-performance track car – the Rodin FZed – in 2019 with a gearbox designed by Ricardo, a UK-based engineering firm. For the new Rodin FZero, the company developed a brand new gearbox with specific gear ratios and differential produced from Titanium. The 18-month design process – a collaboration between Rodin Cars for the casings and Ricardo for the internals - resulted in a gearbox with a hydraulically controlled differential that can only be produced using additive manufacturing due to its ability to directly 3D-print the necessary internal galleries and thin-wall bearing and mount structures. Rodin Cars’ engineers worked alongside members of 3D Systems’ Application Innovation Group (AIG) in Littleton, CO, and Leuven, Belgium to design the gearbox.

The AIG engineers leveraged 3D Systems’ direct metal printing (DMP) technology to create the gearbox, which includes 2mm thick walls and has a total weight of 68 kilograms. The application engineers optimized the gearbox print design details for additive manufacturing at the scale achievable on the DMP Factory 500 and produced the first part on its DMP Factory 500 in Leuven. AIG has successfully completed the technology transfer to Rodin Cars for full production. Rodin Cars recently installed a DMP Factory 500 on-site at its newly expanded facility and will produce the gearbox, as well as hundreds of other bespoke parts, for the Rodin FZero.

“3D printing allows us to design and create components otherwise unachievable using traditional methods of manufacturing,” said David Dicker, founder, Rodin Cars. “With the Rodin FZERO gearbox, we had specific criteria we wanted to meet in terms of weight and durability. Because of the size and quality required for such a large component, it was only possible to print it on 3D Systems’ DMP Factory 500 machine. We couldn’t source another AM supplier who was able to offer a similar solution for our needs - the print quality, volume capacity, testing facilities in Leuven, and continued technological support.”

“Additive manufacturing is enabling industry leaders to defy limitations and stand apart,” said Kevin Baughey, segment leader, transportation & motorsports, 3D Systems. “As a high technology, high-performance car constructor, Rodin Cars delivers unparalleled vehicles to their customers. This is a shining example of how additive manufacturing not only enables parts to be produced that couldn’t be created through conventional methods, it is also delivering a lighter, more durable, beautiful vehicle. It’s the blending of the art of design with the science of hyper-performance cars and motorsports.”